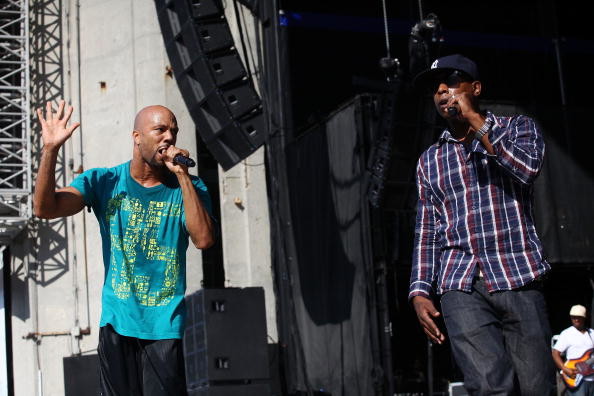 Be thankful for all of them. And make sure you hit the follow button on all of their profiles…

@BigBoi/1.22 million followers
Maybe it’s because he’s often the underappreciated member of the groundbreaking duo Outkast, but ATLien Antwan Andre Patton makes sure his fans know they mean something to him. Whether he’s chopping it up with fans about stylish socks, cheering on his son’s and nephew’s high school football teams, or simply granting retweets, Sir Luscious Left Foot keeps his Twitter game so fresh and so clean.

@blackthought/49K followers
The voice of The Roots’ is one of many politically-minded Tweeters on this list. What else would you expect from one of the leaders of the group behind Things Fall Apart and Game Theory? Tariq Trotter boldly sounds off about racism, our country’s drug problems, and of course, President-elect Donald Trump. And because Twitter is devoid of tone and people tend to take things at face value, Thought lets people know when he’s being sarcastic. It’s not all about politics, though. For instance, one tweet revealed that he was once the proud owner of a Spider-Man lunchbox.

@MrChuckD/572K followers
I got a Tweet from the government, the other day…
Chuck D never shied away from controversy as the lead MC in Public Enemy, and he’s brought his take-no-prisoners attitude to Twitter. His Twitter fingers get extensive daily workouts, and he’ll enthusiastically debate everything from the merits of vinyl to the problems created by fracking. Ironically, on November 12, a day he sent out 16 Tweets, he had tweeted a very anti-social media message:

Artists SHOULD build their own .coms .orgs. PLATFORMS,SOCMED are only extensions like fingers to a hand.Artists depend SOCMED WAY too much.

@common/3.48 million followers
Common is that conscious, grown-man rapper that everyone seems to love. His everyman raps have been appealing across generations, and fans are eager to gush their appreciation to him on Twitter. Rather than simply retweet their praise in self-congratulatory fashion, Common takes time to thank his fans for the love. He also answers questions directly on when his music will be available. What a nice guy.

@FINALLEVEL/702K followers
Ice T doesn’t play. The guy who came under fire in the ‘90s for a song about killing cops is just as audacious on Twitter. He stays current on politics and other current events and has no problem sounding off. He recently called Trump a “Clown Ass” for his comments about the Hamilton cast’s message to his running mate, Mike Pence. When some people had a problem with that, Ice-T had no issue firing back on their asses all the same. It’s not all heat, though. He also answers fan’s questions about his music.

@JustBlaze/402K followers
One of the 2000s’ greatest producers is also one of Hip Hop’s most active Twitter presences. He treats Twitter like a cell phone, engaging in lengthy conversations with friends of his. However, when a fan jumps in with an opinion, Just is glad to oblige with a response. He’s also not afraid to go against the grain, as he did recently regarding Kanye West. In the wake of Kanye’s inflammatory pro-Trump sentiments, Just told podcast host Combat Jack to give Yeezy a break, because it was the nine-year anniversary of his mother Donda West’s funeral proceedings. “Everyone handles those things differently,” he said.

@LupeFiasco/1.42 million followers
Anyone who has ever been to a Lupe Fiasco show knows how funny and interactive he is with the crowd. So it’s no surprise that he’s just as candid on Twitter. Lupe gives fans updates on his music, props for their dedication to him, and even will tell a cheesy joke to the masses:

Lupe may be a polarizing figure, but one thing is undeniable to all: the man loves his fans.

@KillerMike/244k followers
The self-described Pan Africanist Gangster Rapper, Civic Leader and activist is also very, very active on Twitter. His tweets are almost exclusively political, and he’s as unafraid to voice his radical views on social media as he is on wax. Naturally, this results in discussion with his fans, and Mike is able to explain himself clearly and concisely.

Naw accepting Rule of masters of extreme. By Any Means & every means shud be our goal https://t.co/PnSQA7ufSY

Whether you agree with him or not, you can’t say the man doesn’t have conviction.

@mastaace/128K followers
Many rappers from the Old School aren’t prominent today simply because they couldn’t keep up with the times. That’s not the case with Masta Ace. Aside from releasing The Falling Season this year, Ace stays prevalent on Twitter. Nearing 50-years-young, he clearly subscribes to the “you’re as young as you feel” rhetoric, and interacts with his fans about his tour schedule, his upcoming birthday, and his music in general. He also engages in discussions about politics, but to a lesser degree than some of the others on this list.

@MCHammer/3.71 million followers
Hammer’s Twitter presence can’t be touched. He tweets like it’s 1990 and he’s on top of the charts. Anything from the Golden State Warriors to the Rutgers University anti-Trump protests to his daily comings and goings are the subjects of his tweets. When it comes to his interaction with fans, Hammer often shows gratitude to those who are still rocking with him. Twenty-six years after Please Hammer, Don’t Hurt ‘Em, he has a surprisingly voracious fan base which tweets at him like it’s Hammer Time.

Pharoahe Monch is another rap vet who is all about gratitude. He gets it in droves for his inspiring, uplifting tunes, and he’s glad to return the favor with tweets that let his fans know he’s appreciative of the love. It’s more than just about thanks, though. Monch will interact with fans about sports (he’s an avid football, basketball and baseball fan) and just about anything else, even old cell phones. Turns out that everyman charm of his isn’t just an on-wax persona.

@questlove/3.68 million followers
Ahmir “Questlove” Thompson is one of the most eccentric, brilliant men in Hip Hop history. His creativity has helped produce classic music as the drummer for The Roots, but it has also made for some priceless tweets. For instance, check out this analogy Questlove used to counsel a fan aching to reach a certain superstar:

@TalibKweli/1.1 million followers
Talib Kweli has made a career out of being a conscious and political rapper. He’s taken that thought process to Twitter, where he holds lengthy, thought-provoking discussions with politically minded people on current events both on U.S. soil and abroad. He’s also the opposite of afraid to call out hypocrisy where he sees fit, always using logic to back up his arguments. Politicians can learn a thing or two from him.

Can you think of any more Hip Hop greats who Twitter interact with their fans on the regular? Let us know in the comments!