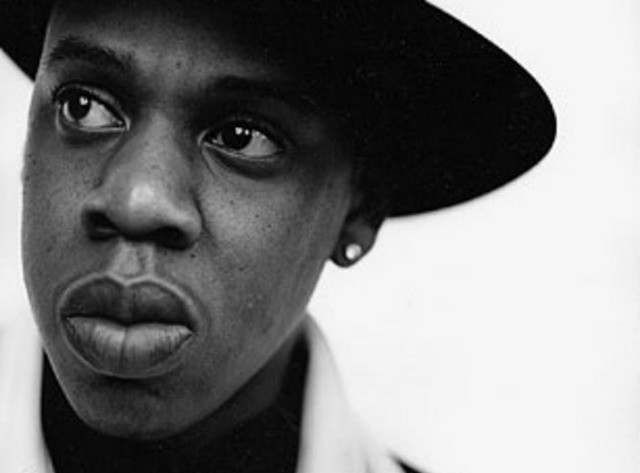 Can't Knock The Hustle: Why Jay Z Hates The War On Drugs

To call America’s racial issues problematic would be putting it mildly (for goodness sakes, we have a presidential platform practically being run on intolerance with constituents openly in support.) Hip Hop is one of the forces uniting youth of every ethnicity*, and in a society obsessed with all things “cool”** it plays a sizeable role in everything from daily fashion to slang and even one’s gait. But let’s face the ugly truth: behind all of the fun surrounding the culture, the comparably astronomical rate of minority mistreatment is toxic and cancerous.***

The face of Hip Hop omnipotence and one of our lead ambassadors for reaching outsiders, Jay Z recently revealed a particularly insidious plot via the New York Times’ website. Illustrated by Molly Crabapple and labeled an op-ed regarding The War on Drugs, there was nothing opinion based about it. For multiple decades now, America has systematically destroyed Black and Latino lives in a number of ways: first by introducing crack cocaine, a drug that not only destroys its users from within but makes big fast money for hopeless peddlers. It’s key that this generation of dealers were in close proximity [read: the ghettos] within major metropolitan markets, effectively setting up parameters of competition far more treacherous than my relatively safe world of freelance journalism. Finally, you prosecute this group of hood entrepreneurs living under the weight of despair and selling the product you introduced to their lives, with the end game being a big counterproductive gumbo pot full of imprisonment and death. I’ve heard the military is considered a similar hustle run on folks, but I’d take my chances of war-related PTSD over the street life any day.

Back In The Day: A hustler era Shawn Carter posted with Queen Latifah and his former mentor, Jaz-O.

When it comes to spearheading these discussions to affect social change, I can’t think of a person better qualified than Jay Z. He’s the ultimate vision of Carlito Brigante surviving and turning his life around to beat the odds. Rising to the top in a world generally rigged against Black prosperity and opposed to us speaking too loud (just look at the jam Colin Kaepernick wound up in), it’s nearly miraculous how far Jay’s charm and business sense have brought him. While the earlier parts of his recording career made his former lifestyle sound cinematic in scope, he always made sure to explore both the thrills and tortures of the fast life. Given his present position of affluence, it makes sense he steps outside of music to explain the nefarious scheme that’s long existed to destroy young lives (most recently Bobby Shmurda, Rowdy Rebel and their GS9 crew) and the foundation of an urban family structure at large****.

“See Ima 80’s baby, mastered Reaganomics / School of Hard Knocks, every day is college / U ain’t did nothing I ain’t did, nigga pay homage” — Jay Z on “Go Crazy”

The crux of Jay Z’s short film exposé dealt with the differences in how the law treats minority dealers and users when juxtaposed with their white counterparts. Racial hypocrisy is as Americanly irksome as pumpkin spice lattes this time of year, the difference being Starbucks will end up switching its menu to Christmas drinks while injustice seems here to stay. If we’re to look at entertainment, Jordan Belfort was a comedic degenerate in The Wolf of Wall Street while Pookie and Gator’s horrific conditions were the butt of everyone’s jokes (maybe the whole laugh to keep from crying thing at play) in New Jack City and Jungle Fever, respectively. All three characters deserved empathy and needed rehabilitation (not to mention the heroic depiction of cocaine-addicted gangster Tony Montana in Scarface) but Hollywood had us believing their situations were extremely different because Leonardo DiCaprio’s character operated in the world of financial services where substance abuse and high-powered business deals coexisted daily.

Jay Z’s 1996 debut album, Reasonable Doubt, set a legacy-building benchmark for the then 26-year-old Brooklynite. It was a literary manifesto of his dealings in the drug underworld and stark level up from the bulk of “mafiaso rap” that was dominating the Hip Hop space at the time.

During a 2010 interview with David Letterman on The Late Show, Jay offered up reasoning as to why he always fail the War on Drugs was “an epic fail” on national TV.

“During that time, you know, all joking aside, you know, this whole Reaganomics, Iran-Contra, you know, all the drugs that influenced, I mean infiltrated our neighborhoods and was everywhere like you could smell the stench in the hallways,” he vividly told the famed talk show host, when asked about the specific drugs that helped fund his initial run into the rap game.

“You know, it was just, we were overcome with this thing and it was fast money and, you know, it’s inescapable.”

He admits he was only 13-years-old when he got his first taste of the underworld.

While I wouldn’t say the world needed absolutely needed Jay Z to break down the drug game’s hazards (any cultural tourist worth their weight in cultural tourism has seen HBO’s The Wire and wears it as a badge of honor), he’s always welcome to speak on Hip Hop’s behalf though I’m skeptical his voice will be truly taken into consideration.*****

Decoded: Jigga brought Letterman to ghetto without riding around circa 2010.

As somewhat of a firsthand witness to the crack epidemic myself (if you recently partook in Netflix’s The Get Down, yes New York was actually that run down), contrary to the tone of Pusha T’s brag raps nothing was witty about seeing neighbors addicted to the pipe or knowing someone arrested/murdered in a drug transaction gone wrong.

The year is ’94, in my trunk is raw/In my rearview mirror is the muthafuckin’ law/Got two choices, y’all: pull over the car or, bounce on the devil, put the pedal to the floor — Jay Z from “99 Problems”

Thirty some odd years later, I don’t claim to have the answers to reversing America’s tricknology [OG hotep phrase of the day], but I can affirmatively agree the laws that forced a young Shawn Carter into trafficking on the I-95 highway need major upheaval.

*Perhaps anime and hanging at the mall bridge the gap as well.
**Prepare for another Halloween season of racist or well-intentioned kids failing to realize the offensive implications of blackface.
***“Black Lives Matter” wouldn’t be a necessary statement if “All Lives Matter” was truly America’s reality.
****Much in the same way my conspiracy theory believes music has come to be used as a tool against our growth and development.
*****Maybe it’s time for the United Nations to consider a separate flag for Brooklyn.