Hip Hop & The Urban Community Need To Man Up Against Homophobia 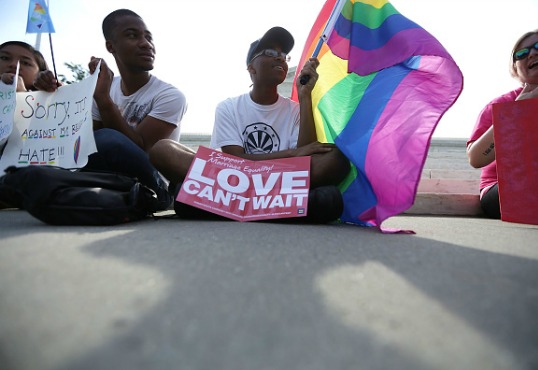 In 2016, one’s sexuality continues to be a divisive subject. Just a week ago, the NBA announced that in lieu of the Public Facilities Privacy & Security Act, an anti-LGBT bill passed in North Carolina, that there would be no 2017 NBA All-Star in the city of Charlotte. It’s an unprecedented move by such a large corporation, costing the state’s largest city upwards of $100 million in estimated revenue during professional sport’s most popular All-Star break.

While it’s a damn shame it took the NBA this long to pull the 2017 All-Star game from Charlotte, ultimately it serves as progress for a cause that is in need of positive traction.

But across the world, people are still losing their lives for expressing their right to love who they chose to love. From the massacre in Orlando to the ignorance of the Westboro Baptist Church, hatred rears its ugly head at every turn. The urban community is a hotbed for homophobia. One would think WE would know first hand how difficult it is to be yourself.

Whatever the intent, Odd Future founder Tyler, the Creator has rubbed LGBT advocates the wrong way with his lyrical content.

But in our community lies some of the ugliest hate of homosexuality in our society. Isaiah Washington was fired from Grey’s Anatomy for his use of homophobic slurs against a fellow cast member. Former 49ers CB Chris Culliver was once quoted saying, “Ain’t got no gay people on the team. They gotta get up outta here if they do that. Can’t be with that sweet stuff.”

In the NBA, even its players haven’t exactly been in full support of the league’s decision. While Kevin Durant initially declined to comment on it until he had a better understanding, once he was informed about the discrimination his new, openly gay Golden State Warriors General Manager Rick Welts was steadfast in his support through a Twitter statement saying, “Discrimination of any kind can not be tolerated”. His counterparts, however, spent an equal amount of time expressing their disappointment for the city of Charlotte as much as they expressed any interest in their employer leading the charge in equal rights. Paul George told ESPN, “I’m huge on keeping your word. I’m not necessarily saying it’s bad for the NBA to move it. Charlotte is a growing city and the Hornets have picked that program up. It’s a shame … we’d take that away from them”. Stephen Curry expressed his support of the move flanked by disappointment his hometown was losing the game more so than the state passing discriminatory legislation. And for Carmelo Anthony, he expressed to ESPN more disappointment about the Hornets and Michael Jordan losing out on the game than joy about the league leading the charge for equal rights to a disparaged group of people.

Even in our own churches, the very men and women who are tasked with spreading the message of God lead the fight against homosexual people. The connection between the Black church and homosexuality amongst its fellow-shippers and even choirs has long been documented yet we continue to shuck and jive at the expense of our own black community members who are LGBT. “Former” gay Pastor and famed gospel singer Donnie McClurkin is infamously known for having prayed away his gay so well to the point he became a sworn enemy to everything his past consists of.

There’s no greater example of homophobia, unfortunately than in Hip Hop. Our genre is one that is celebrated for its roots in rebellion and freedom of expression. Our genre is one built on fighting for our rights. Yet in our music, we continue to disparage the progression of a group of people fighting for their equal rights.

Tyler, The Creator uttered the homophobic slur “faggot” 213 times on his 2013 album, Wolf. Chris Brown has been criticized for using homophobic slurs and rhetoric against Raz B in lieu of him coming out about being sexually assaulted as a kid by his former manager Chris Stokes, and again in a war of words with Frank Ocean after coming out as bi-sexual. After a history of homophobia toward Perez Hilton and the LGBT community, Azealia Banks was permanently banned from Twitter. Khujo of Goodie Mob once infamously rapped on “Fly Away”: “Ain’t no due process/For boys that become girls or verse vica/Field niggas control this/Pin the hollow point tip on this gay rights activist…”

Even everyone’s favorite conscious rapper Common is not excused for his blatant disregard of LGBT equality. Homophobia, along with misogyny, runs wild throughout Common’s discography. Lines such as “You couldn’t hang if you was a poster/posin’ like a bitch for exposure/It’s rumors of gay MC’s, just don’t come around me wit it/You still rockin’ hickies — don’t let me find out he did it…” taken from “Nag Champa” off what is highly regarded as Common’s first classic album, Like Water for Chocolate taint the overall flow of things.

And then there’s the ugly ignorance and hate of a Hip Hop has-been the name of Lord Jamar.

The Brand Nubian member has launched a post-rap career for being on the offensive against what he calls the “Gay Agenda.”

The icing on the cake of ignorance, perhaps, lies in the recent comments of KRS-One regarding the allegations regarding Afrika Bambaataa’s 20+ year history of sexual molestation against pre-pubescent males coming to the surface. With a history of homophobic lyrics himself, it’s amazing KRS is able to absolve Afrika Bambaataa’s sexual molestation allegations with, “When you’re talking about Afrika Bambaataa, first of all, you’re talking about the person who invented Hip Hop. Not participated in it. There was no Hip Hop before Afrika Bambaataa. Let’s start there, so anyone who has a problem with Afrika Bambaataa should quit Hip Hop… Some of us are infallible. Some of us are going to have to be untouchable or our entire culture is going to fall. Our culture cannot fall on the accusations of four people, that’s weak.”

You know what’s weak? KRS-One. Common. Lord Jamar. And everyone who participates and has participated in a culture that denigrates and disparages anyone based on religion, race, looks, sexual orientation, shoe size, pant inseam, hairline and/or whatever the damn case may be that you’re born with or as. It’s time Hip Hop changes its mentality. It’s time the urban community changes its attitude. When Dr. Martin Luther King Jr. had a dream for all black people, I’m pretty sure it didn’t come with a disclaimer that said, “no gays allowed”.

It’s time we walk back this culture of hate and stop oppressing people in the same ways we’ve all been oppressed by this society as minorities. That same culture of hate that targets African Americans and that targets this shit we call Hip Hop, we’ve turned it around and used it to target those who we feel are different. It’s never too late to realize the error of your ways and apologize like Kirk Franklin.

KRS-One has had a hell of a year thanks to his support of Afrika Bambaataa.

As a heterosexual Black male who loves Hip Hop, I’m issuing this challenge to all of you. We have to change the way we approach the world. We can’t fight for change and we can’t fight against injustice while keeping our own thumb of oppression and hatred on the necks of another group of people. Demand better from your luminaries. Demand better for yourself.

Be the change you want to see in the world. It starts with you.

Marcel Williams is Michigan transplant thriving in Los Angeles and he loves his #HailHydra hashtag. Catch him on Twitter at @WHUTUPDOE.