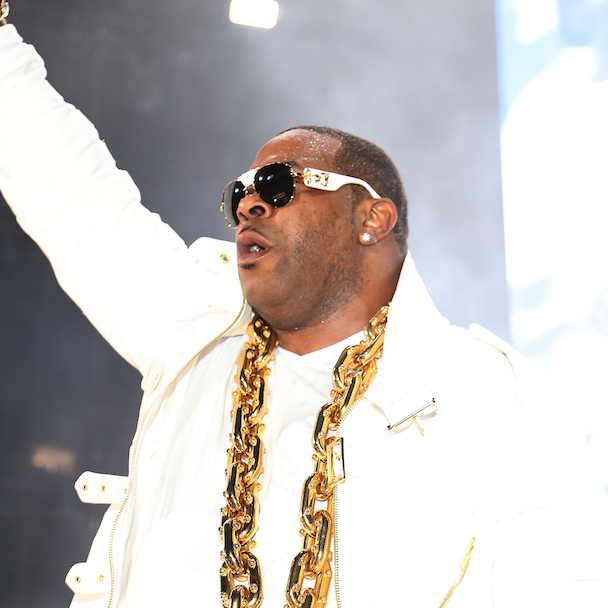 Busta Rhymes, His Star Studded "Hot For The Holidays" Show & 25 Years Of Hits

Busta Rhymes has a lot of friends. He’s wrangling them together for a star-studded end of year extravaganza. It’s going to be lit. Everyone will be there. Puff Daddy will be gracing the stage — a part of his final two years of touring and final album, No Way Out 2, where we are supposed to believe that the Bad Boy mogul will never grace a stage again. So will Mary J. Blige, Lil Wayne, that old reggae mastermind Sean Paul, the perpetually fun French Montana and a few surprises. Note: I don’t know who those surprises are. But, in speaking with Busta, he doesn’t seem in much of the mood to jones after a long day of doing press. “Well, it was a concert that I planned to do three to four years ago,” he’d say. “I did the planning for the show because I know what this time frame was gonna mean for everything that I had coming up starting next year..” He’s talking about a slew of anniversary’s rolling through. 20 years since The Coming starting in 2016. 2017 marks the 20th anniversary of When Disaster Strikes. 2018 makes it 20 years since Extinction Level Event. He reels the names off as though he’s looking at baby pictures of his children uncoil through frosted plastic from a huge wallet. He’s proud of the work he’s put in.

The show is going to be at the Prudential Center in Newark on December 5, and he brought it to Hot 97, not the other way around. “Once I was able to comfortably facilitate doing what I wanted to do with the concert me and my team [Conglomerate Entertainment] brought it to Hot 97 and allowed them the opportunity to partner up,” Busta says. I imagine him looking at a bank statement and counting the zeros or swimming in his money bin or something. He does this kind of thing all the time. But, for me, this is the opportunity of a lifetime. Busta Rhymes moved from a 1970s East Flatbush to Uniondale Long Island in 1983, the year I was born. I was brand new to the world when he went to Uniondale High School and would grow to meet emcee’s like Charlie Brown, Cut Monitor Milo, and Dinco D and formed Leaders Of The New School. I would move to Elmont, Long Island in 1989. I was six. They would only release two projects before calling it quits, but you knew Busta was a star when you saw him in that Cat in the Hat outfit on the Arsenio Hall show. I remember that show. I was 9, and my mom was trying to make sure I was asleep for the school the next day. Of course, I stayed up because there was a heavy, black cathode ray tubed monstrosity in my room, and because I was just getting into Hip Hop. I turned it on and heard static before the picture seemed to magically come out of nowhere. A Tribe Called Quest and Leaders Of The New School were doing “Scenario,” and Busta Rhymes’s energy and outfit and everything was incredible. A star was born.

Busta’s been a part of almost every major trend and twist in Hip Hop since, all with his own quirky style and uptempo, rapid-fire delivery. In a lot of ways he helped push forward the narrative of Hip Hop. In an age where people were spending a million dollars on videos, Bussa Buss always shocked you into movement. The visuals for “Put Your Hands Where Your Eyes Can See” might be one of the best of all-time. The thing had elephants. A Coming To America like dance troupe and Prince Akeem and Semmi mirrored martial arts choreography. Like, what?

So Busta Rhymes has been a keen part of my growing up in Hip Hop. He managed to maintain, with wit and energy, the party roots of Hip Hop when mafioso sentiments were being copycatted all over the genre. He made it okay to be weird and funny and still be cool. If there was an “alt” Hip Hop category within mainstream rap at the time, Rhymes was the King Kong of that lane. There wasn’t anyone better. He’s not, and you hear this all the time, but he’s really not here to rest on his laurels, though. He’s not ready to be cast out into the Eskimo-like tundra of Hip Hop legends past. “You know, I haven’t put out an album for retail since 2009. So it’s been some time and I’m a studio rat so I’ve been diligently working on material for the last bunch of years.” He’s getting excited now, thinking about what’s to come. “I have over 600 songs so I’m finally at a place where I wanna start sharing some of this incredible stuff that I’ve been brewing up. Showing people how being patient was not only my greatest weapon but was an incredible virtue.”

He’s had to be patient. His biggest Billboard 100 hit to date is the Janet Jackson gumbo of sex appeal “What’s It Gonna Be.” It peaked at number three. I don’t know about Busta, but it was never about charts for an overgrown kid in a rapidly darkening neighborhood on small-town Long Island. When we moved in most of the block was white. By the time high school hit the entire block was brown, filled with the Caribbean and Indian immigrants that had been hurrying to Long Island from Brooklyn for better schools and little to no violence. Busta from East Flatbush and, well, me too. So when I ask him what he thinks the game’s been missing without emcees like him dropping albums since 2009, he’s got a lot to say. “I think you’re always gonna miss something when change happens,” he starts. “Some things and traditions that we used to hold on to, we’re gonna miss when they’re not there anymore and it’s our job, while we’re still here, to uphold the fundamentals and it’s our job to make shit that’s swift and changeable but always remaindable.” The last word makes me smile because he’s doing word flips over the phone on an interview. Hip Hop is a culture, after all. He continues, “The motherfuckin’ new motherfuckers that don’t value those certain principles and traditions, when they see us still poppin’, and us setting the standards and us wearing those crowns as the A-List alumni in this shit and the icons and the Gods of this shit, you know, they’ll be forced to follow suit.”

That’s the Busta Rhymes I’d imagined. Here’s how he finishes up, “The Kendrick’s and J. Cole’s and Mac Miller’s and Drake’s, you know, they got that boom-bap shit on their albums, man. They rhymin’ a little trap here and there, but that ain’t on their projects. Rap is on their project. And it’s good to see it because it shows that they love that. They’ve been researching, and they want to reestablish and reinstate it. And, for me, it means it’s perfect timing for what I’m getting ready to do with the ass-whoopin’ I’m about to give the game.”

It looks like 2016 is going to be seeing a revitalized Busta Rhymes. For now, enjoy his stacked lineup of a show. It’s important to him. He says, “This is a defining moment for me. You know, headlining an arena concert that is solely a Busta Rhymes show.” In many ways Hip Hop has been headlining Busta Rhymes for a while now, and, still, he’s ready to give it the ass-whoppin’ he always has.