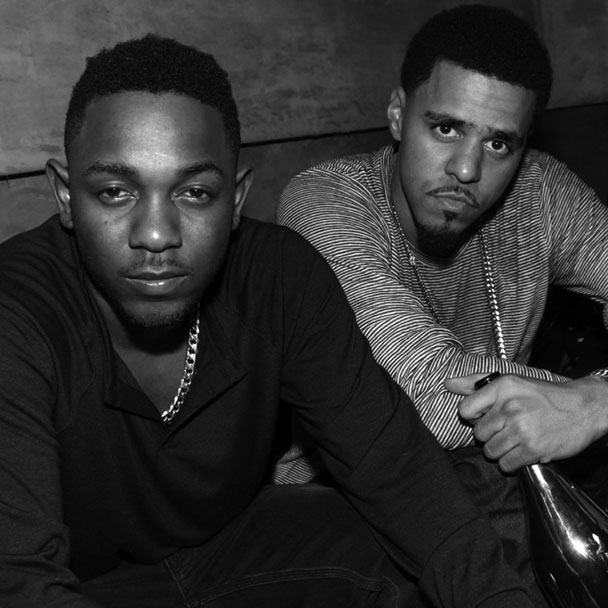 Kendrick Lamar and J. Cole have been hinting at this team up thing for a while but other than the rough cut “Temptation” from a few years ago and Born Sinner’s “Forbidden Fruit” they’ve largely kept out of each other’s way. That might be ending. They’ve both talked about working together next year and on this here #BlackFriday they went ahead and switched records. Cole tackled K. Dot’s amazing “Alright” and Kendrick got at Cole’s “A Tale Of 2 Citiez.” Of course, a collaboration between these two would literally break the Internet, but are these two alley-oops indicative of things to come? Or are they just teases for nothing in particular?

Andre: Kendrick Lamar’s stand out record “Alright,” with all its swirling horns and off-kilter melodies got the J. Cole treatment on black friday and it was even kind of enjoyable. J. Cole’s craftsmanship is for certain folks, for sure. I mean he’s soulful and can rap his ass off, and at times his metaphors approach straight up butter. He can be artful and he can be really strong and emotional but he doesn’t really do desperate. And this was a desperate record. Remember his Mike Brown tribute? That scraggly tenor morphed into real pain. It was beautiful. So it makes choosing this one an odd choice since he’s not as connected as K. Dot was when he made the record. It makes it almost of a let down. But as a purely lyrical exercise he more than brought it. “Fuck do you know ‘bout my pain!” he growls and you believe him. For Cole, things have largely been about making it. This makes sense as the aspirational rap of the 90s heavily influenced him. Just look at the guy sitting upstairs at Roc Nation.

His aspirations are slightly different, though. Cole wants to be happy. This makes his message a muddled one sometimes. Happiness is this one day and that another. Maybe that’s what makes him so incredibly accessible as an artist. He goes on about things like, “Where was you when the Civic was getting towed, my nigga?” Well, like, damn J. Cole, we didn’t know each other then. The no new friends stuff is dope, but, man, the I’m-a-regular-guy stuff J. Cole bodies tracks with really has no place on “Alright.” That song and the production that accompanies is like Barack eight years ago: it’s hope and change. Still with all that hanging over him, just him tackling the record and making it feel like a J. Cole record feels almost Herculean. And at the end when he mentions what he’s gonna drop in February of next year? That’s all the promotion the man needs! The guys is a machine. So the verdict? Despite my teetering back and forth, I do think he delivered. And, he’s kind of right. Can we handle two black kids that clever?

Ural: It’s a beautiful thing to see Hip Hop so unified at the moment despite the allure of beef this year. Even better when watching two of the culture’s most coveted vanguards spitting on top of each other’s instrumentals from their newer projects. J. Cole tackling “Alright” was a very straightforward move considering how commercially appealing To Pimp A Butterfly’s most adorned track is. There are some high standards for anyone taking on an instrumental from K. Dot’s modern classic and thankfully, Mr. Jermaine does the Sounwave and Pharrell produced jam justice. Sure, he doesn’t match Lamar’s breakneck delivery nor poignant message. However, one can tell Cole had an exact purpose. In fact, in probably one of the year’s best strategically placed fan moments, he drops this line: “When you and K.Dot shit dropping / bitch never/ they can’t handle to black men this clever / but this February bet shit get scary when I fuck around and drop….”

What could this all mean? Does this mean the world will finally be pleased with a joint album from Cole and Lamar? If so, this is one helluva starting point. If not, there’s no doubt both have an uncanny ability to dangle a carrot as everyone runs in place hoping for something.

Ural: While Cole used the “Alright” beat as some chess move for something important coming soon, King Kendrick just talked shit in the best possible way over Vinylz’s “A Tale Of 2 Citiez.” Really puts into perspective how completely different both are in their approach to rhyming. Cole is constantly feeding his fans anything they want. Meanwhile, Kendrick comes off as a top tier athlete more concerned with topping the previous game. The line about his place on Billboard’s controversial rap list or bumping College Dropout if Kanye West wins the 2016 presidential race makes this his best non-album loosie since “Control.” At this point, K.Dot knows Hip Hop is watching every bar and cadence coming from his mouth. Makes sense as to why he’d rev his mental engine before cutting it off and casually saying “I’m just fuckin with you.” Of course, he’d also take the time to mention Donald Trump and critics of his sophomore album. Lamar rhyming over Cole’s 2014 Forest Hill Drive track was a lyrical exercise full of bar-for-bar energy.

With Kendrick alluding to possibly leaving To Pimp A Butterfly alone, it’s fairly interesting to see he hasn’t given up on more straightforward production. Could this mean that another release from him is closer than we think? Maybe the two are slated to drop their anti-What A Time To Be Alive soon. For the moment, both artists having mutual respect for each other creatively and these tracks are further proof. Then again, maybe this is the beginning of something grand.

Andre: Kendrick is in a place right now where everything he does makes sense. It just reveals itself to you like that shorty in the sundress to your left. God bless L.A. “A Tale Of 2 Citiez” isn’t an easy beat to rap over either. Vinylz laid it on thick and the song sounds disjointed if not antithetical, an anti-song. Cole’s original came right after the syrupy “03’ Adolescence” with his flow cutting the river Euphrates through his teenaged meanderings. He’s amazing at that. That song on the album brought me right back to the overly-painted green locker, its musty, sweaty confines needing a good wipe down. That flew right into “A Tale…” and it provided the backdrop for Cole’s tale of a young boy at a crossroads. He’d say he chose the middle path and went straight. But Kendrick does none of that. This is a straight lyrical exercise. It’s signature Kendrick. He even jumped on Billboard for leaving Tupac off that list, too. He’s current and creative in whatever he does on the mic. And, at this point, if you don’t like Kendrick Lamar do you even really listen to rap or do you just skim through it.

But it’s these lines that have me the most satisfied. On the criticism of his classic album To Pimp A Butterfly he says this, “Nothing more influential than rap music / I merged trap music with the jazz music / I merged black soul with the Rock n Roll / They’ll never box me in I’m David Blain-ing on you hoes.” And there you have it.