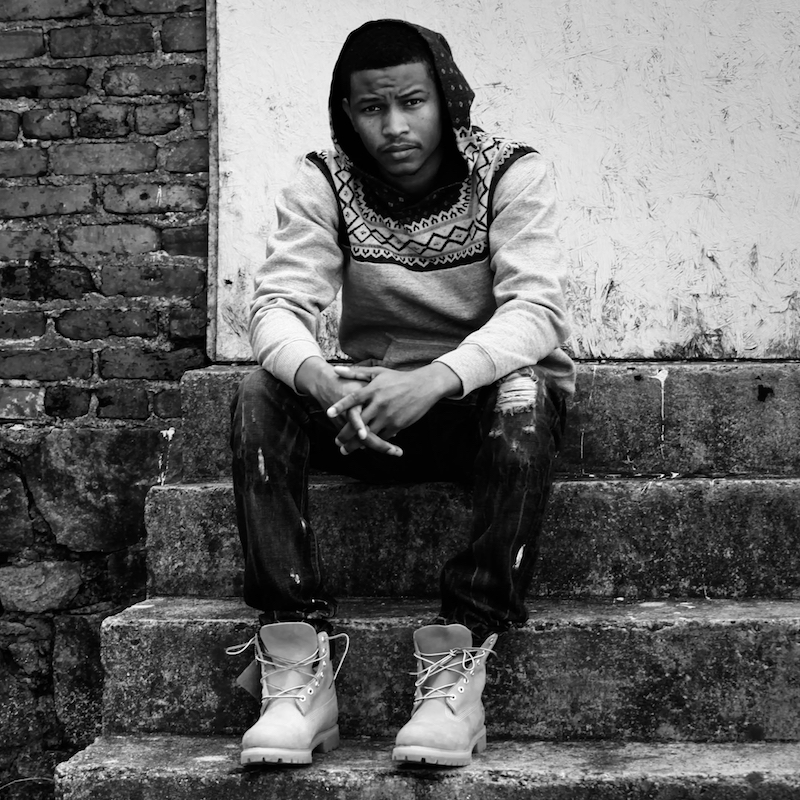 In mid-October, Grand Hustle co-founder, Jason Geter sat before an audience of about 40 at Atlanta’s SAE Institute, a sort of new age [college] for music techies. His newest artist, Nick Grant sat quietly in one of the last rows for the #ExperienceHope conversation, virtually blending into the crowd of young people hopeful to receive a sympathetic tidbit, or better yet, an outright invitation to be ‘put on’ with the Grand Hustle clique. Grant was still. The Walterboro, SC-native picked at his distressed denim, listening closely but unaffected — he was already personally familiar with Geter’s story. Then he was called to the front to rap a taste — on the spot. And although he was caught off-guard, breaking into a toothy grin and slowly pacing up front, Nick Grant answered the call.

He has never been afraid of the showcase situation. It was just a week before when the 27-year-old found himself on the mic at an Atlanta broadcast of Sway’s Universe. With Jeezy on one side, DJ Cannon on the other and No Genre’s Scotty ATL at the rear, Grant spit line after line — all clever, all sharp, all rare from a young cat out of South Carolina, or anywhere really for that matter, especially these days. The Marshawn Lynch line — Jeezy had stopped chomping on his gum as he looked on, he threw his hands in the air and walked out of the studio, incredulous at the skill of this virtual unknown. That line was one of many that people talked about for that full week in between: “That last nigga slept, though, I need it up front / Quiet as kept though / I’m like Marshawn Lynch with strep throat…” And that’s hella quiet.

“Before [Jason] there was another situation but it ain’t work out for me,” Grant shared at SAE that afternoon a week later. Whoever that guy was behind that “situation,” he must be regretting his misstep now — thankfully Geter has had his eye on Grant since they met a few years back. Now they have a full project done that’s currently being polished and Grant has worked with people like Stacy Barthe and Dominic Gordon.

“I thought [Nick] was dope,” Geter said of the first time they met. “I felt like he had it then but after us getting back in contact with each other, I definitely saw the growth as well.”

“As a rapper, he’s got verses and all that and that’s dope,” he added. “But the point of making songs and putting songs together, the selection of beats that he chose, all of that stuff, I just noticed he got better and the maturity as well.”

Geter describes Grant as being a true student of the game — definitely not hard to believe after listening to his latest release “Royalty” where he holds his own beside G.O.O.D. Music’s own CyHi the Prynce — the latter is known for beasting on any track, especially as a featured artist. But Nick has known Cy since they ran the same circles around Atlanta open mics years ago — he’s familiar and fully capable of matching that sort of superfluous talent. So it’s nothing. He’s respectful of fellow MCs like J Cole, Kendrick and Drake, but he admits,  unabashedly, that he will hold it down when the time comes to collaborate.

It’s all because Grant understands the spirit of the industry he’s in. “I wanna say I’m the best in the world because that’s how I’m supposed to say it,” he said, laughing. “If you ask Allen Iverson — can Michael Jordan beat him — what you think he gon’ tell him? Nah.” It takes more than bars to be the “best” these days too, though. Geter says that although most people “know him for Tip,” there’s also Travis Scott whose career he’s been behind. “I’m looking at artists that I think to have the potential to have those types of careers — beyond music,” he shared.

The CEO’s thinking about film, television, clothing lines and endorsements — a whole other pocket within the game. He reveals that actual partnerships are preferred with the artists he works with these days, as opposed to stale record contracts and empty promises based on chance. Although Grant isn’t signed to Grand Hustle as of yet, his connection to Geter’s new company Culture Republic ought to put him ahead of the game. “I kinda stepped away from music with doing fashion and different things but now, me running across Nick, I’m like…,” he paused, then continued. “The old model of doing business in music is done man. We all know it but the structure and the way it’s set up… People are in denial.”

“But I’m like, ‘I’m ready to move on to the next stage,” he added. “I’m looking towards the future with the music business.’” The future — perfect positioning for Nick Grant, a kid from humble, home studio beginnings — priming himself for a seat at the dinner table, ready to feast like royalty.