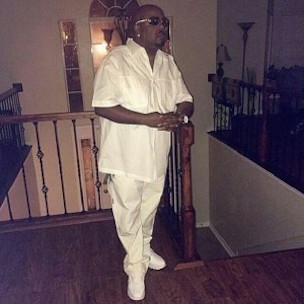 The glory days of New Orleans Hip Hop are commonly associated with the success of Cash Money and No Limit Records. Bounce pioneers like DJ Jimi and DJ Jubilee get included in that conversation too, but usually the conversation is quite narrow. In reality, New Orleans Hip Hop is filled with many contributors who deserve considerable recognition. One of those people is Charles Temple aka “Big Boy,” who passed away on Monday, September 21.

Temple, alongside producer Leroy “Precise” Edwards, founded Big Boy Records in the early 90s among a slew of fledgling Hip Hop labels popping up in New Orleans. While their run was relatively short, they made a huge mark on the scene and the careers of some of the city’s biggest artists.

Temple’s most prominent move during his “Big Boy” run was giving Mystikal his first break in the business. After getting his start through renowned producer KLC’s Parkway Pumpin’ imprint, Mystikal joined Big Boy Records and released his self-titled debut album on the label in 1994. Big Boy linked up Mystikal with a local legend named Tim Smooth, who mentored Mystikal and helped mold him into the artist fans know today. “Had I never met Tim, I would be a totally different artist,” Mystikal told the Times-Picayune when Smooth passed away four years ago.

What was particularly unique about Temple and Precise’s vision was the variety their label cultivated. While Big Boy had its bounce artists like Sporty T and Partners-N-Crime that fell in line with the prevailing style of 90s New Orleans rap, they also had the likes of future No Limit star Fiend, the Ghetto Twinz, Black Menace and G-Slimm that were in a much different lane.

Partners-N-Crime became one of the most popular bounce acts during their time with Big Boy Records off the strength of hits like “Pump Tha Party.” At the same time, G-Slimm would deliver music that would have you mistake him for a Compton native making g-funk. Precise’s flexibility as a producer and Temple’s willingness to expand outside of simply pushing bounce music helped Big Boy stand out from the pack.

Beyond the music, Big Boy Records also participated in one of the city’s most intense rap beefs. While most consider No Limit to be Cash Money’s biggest rival, it was Big Boy who had the most intense battle with Birdman and Slim’s label. The aforementioned Partners-N-Crime, who had been friends with many Cash Money artists, essentially kicked things off when they chose to sign with Big Boy. Cash Money artists UNLV would go on to claim that Partners-N-Crime bit their style and the war began. Kango Slim and Mr. Meana would respond to UNLV on their 1994 debut album PNC as things escalated.

Each label’s roster got involved as full-fledged diss tracks and frequent one-liners became common place for both sides. Many of them were far from subtle, particularly “Fuck Big Boy” from B.G. and Lil’ Wayne’s Cash Money debut True Story (released under the BG’z moniker). One of Big Boy Records’ more notable disses came from label stalwart Sporty T as he attacked Juvenile for a line from album Solja Rags with the retort “Juvi (You Ain’t No Soldier).”

The most infamous diss came when UNLV, more specifically group member Yella Boy, targeted Mystikal. Even though Mystikal had essentially moved on from Big Boy when he signed to Jive Records, he was still part of the Boot Camp Clicc (not to be confused with the Duck Down collective) that was comprised of Big Boy artists. Jive re-released his Big Boy album in 1995 with a few new tracks, which were responses to Cash Money’s recent barbs. “Beware” and the classic “Here I Go” were the latest entries into the feud and added more fuel to the fire. In return, UNLV dropped the scathing Mystikal diss “Drag Em N Tha River” on their 1996 album Uptown 4 Life. The song is one of the most vicious disses you’ll hear and became one of the biggest songs in New Orleans Hip Hop history.

The Cash Money feud would last Big Boy Records’ entire run. Ultimately, Cash Money was the de facto victor as 1997 marked the end of Big Boy. The label would try to relaunch in the mid-2000s, but it simply wasn’t the same. Despite their brief time in business, Big Boy Records made a huge impact on New Orleans Hip Hop.

Charles Temple’s name will never be as well-known as Birdman or Master P, which is why it’s important to acknowledge the contributions he made during his life. Temple did not experience that level of fame, yet he was a critical force in the landscape of a burgeoning New Orleans’ Hip Hop scene in the 90s. Temple was truly an unsung leader in making New Orleans a factor in the Hip Hop world and his legacy should not be forgotten.