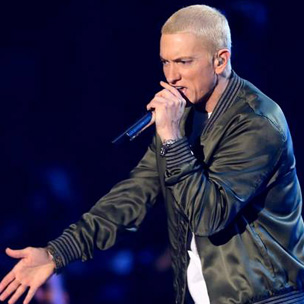 Eminem, just as he has persistently done throughout his remarkable career, made history over the weekend. A select 90,000 of us got to experience a little piece of Hip Hop history live, and although the proceedings weren’t perfection, Slim Shady proceeded to deliver one of the most entertaining shows of his career.

Of course, Wembley Stadium is already known for hosting some of the most illustrious events on the planet. Legendary artists outside the sphere of Hip Hop have rocked the stage there including the likes of Metallica, Green Day and AC/DC, but we’ve never seen Wembley, a 90,000-seat behemoth, headlined by a rapper. This was Eminem’s first show in London since 2001 and just a year after being outright banned by the Royal Parks for being too racy for the brit constitution. Thus, it was a night 13 years in the making, and perhaps one made possible by taking it easy on touring overall. In his interview with BBC One’s Zane Lowe he had this to say, “I’m good how it is right now—just kind of doing shows when I can do them. As far as being on the road, I don’t know how that works for me right now… I’m not saying I’ll never do that again, I’m just saying right now, this is what works for me.”

So the day Slim Shady announced his then one-day, one-off concert, the Internet exploded. Ticket prices quickly inflated, and it was virtually impossible to find a set for anything less than a risible amount. Fortunately, for those who hadn’t given up hope, a second date for July 12 was quickly added and the excitement and ensuing speculation about the set began. Still, it being in England and all, the chances are that you missed it, but don’t sweat because HipHopDX divulges five of the greatest moments from Em’s Wembley Stadium double for your viewing pleasure. 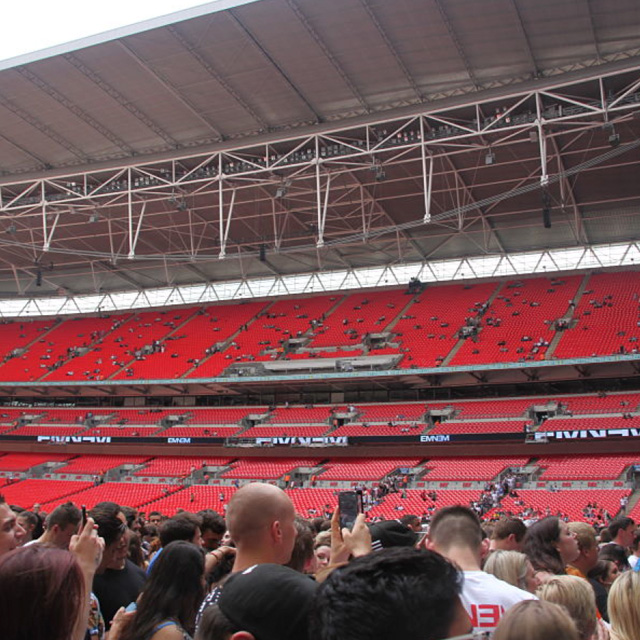 For those who have seen the sheer presence of Wembley, or stadiums of a similar ilk, you’ll be able to fathom the breath-taking ambience of such an arena. For scale, Wembley is almost double the size of Yankee stadium and only eclipsed by stadiums the likes of the Rose Bowl, Ohio, Beaver, and Lion Stadiums. The last three College Football giants have capacities over 100K. Fuse this with the site of thousands upon thousands of Eminem fanatics flooding into this seated wilderness and, although cliché, we get something truly picturesque. I spoke to people from all four corners of the globe, all of whom had made the journey, somehow, to see their idol perform. Some diehards were there to hear Shady’s more radio-friendly cuts, “Love The Way You Lie” and “The Monster feat. Rihanna,” while the more militant were there to hear the grittier, more violent cuts of the raw, groundbreaking Eminem of the late ‘90s. We got it all, over 30 performances of tracks from his exalted catalog. 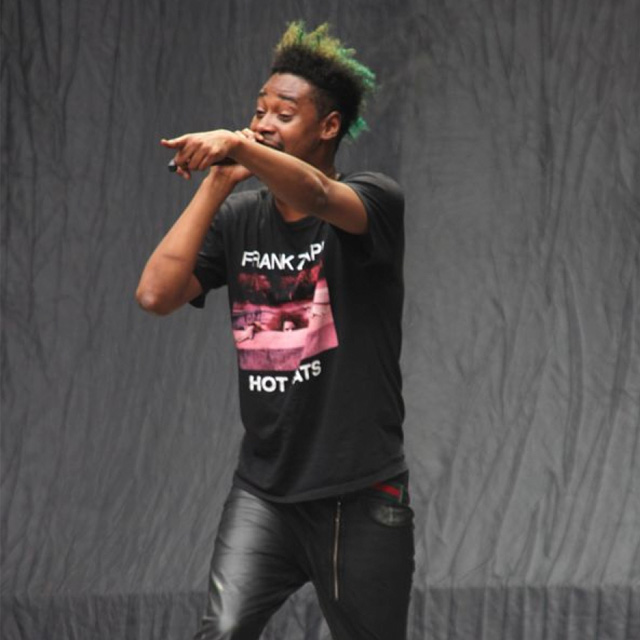 There was little introduction for Danny Brown, the first opening act of the night, but his recurring “Wembley Stadium make some noise in this bitch,” chants, did a laudable job of waking up the crowd, many of whom were trying to comprehend the two hours that stood between them and the Detroit emcee. A pleasant and unexpected supplement to Danny Brown’s set was a surprise appearance from A$AP Rocky who, although his tenure on stage was short, performed the Hit-Boy-produced cut “1 Train,” of which Danny Brown co-stars, off of his 2013 Long.Live.A$AP album. All that didn’t stop the bruiser brigade captain from getting nostalgic, though: “We went from playing shows in the back of the Alife store to sharing a stage at wembley stadium love,” Brown tweeted after his performance.

OFWGKTA was the second opening act of the night, and put on an in-your-face performance with Tyler, the Creator at the helm. Resonating throughout were hits “Tamale” and “Rella,” while Hodgy Beats went crowd surfing and Left Brain meandered nonchalantly. But it were Tyler’s signature antics that won the crowd. No more so than when he started thrusting his pelvis while looking at himself on the giant screens because… Tyler.

After hours and hours of standing around and being pushed from pillar to post, we eventually saw sparks of life coming from the Eminem camp. After a colorful performance from Odd Future, the final opening act of the night, a colossal white curtain dropped as if to hide the deity that was being primed inches behind. Fans were chanting, “Shady, Shady, Shady,” waiting for one of Rap’s megastars to be revealed.

The jumbotrons on either side of the stage roared to life as fans witnessed a short film that may turn out to be visuals for Eminem’s next single “Bad Guy” off his recent The Marshall Mathers LP 2 (if it is, you heard it here first). The video acts as a sequel to “Stan” except from the position of his vengeance-driven brother Matthew, of whom Eminem pens the song. We hear from Stan and Matthew’s mother, who details her sons’ obsession with the Michigan emcee, as well as CCTV cameras broadcasting Matthew driving ‘round Eminem’s estate and later breaking into his mansion.

Without argument the best surprise of the evening, Hip Hop aficionados are well aware of the chemistry and mutual respect these two musical giants have with each other. Add in the fact that the good doctor very rarely performs, ever, when Em performed “Dead Wrong,” whipping the crowd into this infectious chant: “When I say ‘Doctor,’ you say ‘Dre!’” The Doc sprang out from the curtains, as not only Hip Hop’s first sort-of billionaire, but as the man who helped put Em’ on the map. The two wasted little time as “Still D.R.E.” resounded throughout the arena. From there the duo broke into “Nuthin’ But A ‘G’ Thang” (with Eminem performing Snoop Dogg’s lyrics), and ended it with “Forgot About Dre.”

Eminem Performs “Lose Yourself” As An Encore 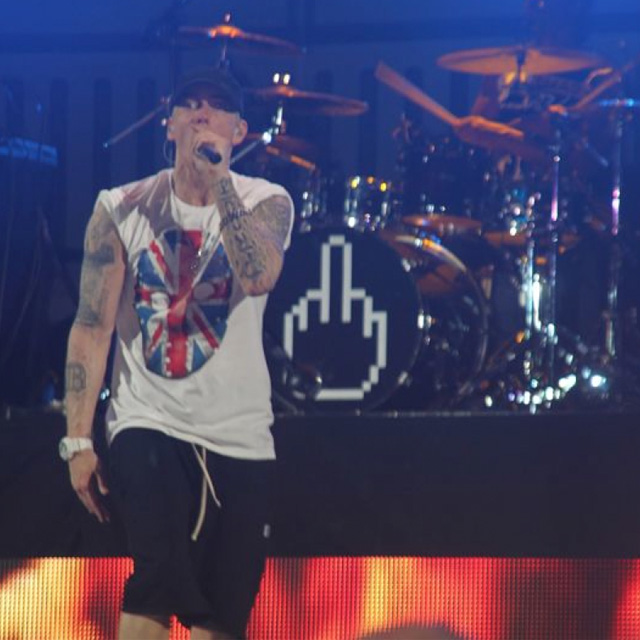 “We love you, London! Peace!” Eminem bellowed to a still-hungry throng. The lights dimmed, and amateur attendees began to leave, the seasoned concertgoers knowing that’s the oldest trick in the book. The band was still live and Eminem’s deejay, Alchemist, definitely had something cooking. The easily recognizable tones for “Lose Yourself” began to ring out and everyone knew what was next. Em, fresh off a quick t-shirt change, came back after continuous, “We want more! We want more!” chants from a truly global crowd. It was not only a gargantuan way to wrap up a show that will surely go down in the history books, it was a fitting nod to the Eminem-backed “Total Slaughter” event taking place just hours later at the Hammerstein Ballroom in New York. The anticipated rematch between Battle Rap goliaths Loaded Lux and Murda Mook, as well as Joe Budden versus Hollow Da Don was imminent. What better way to wave the night goodbye than to hear the emcee’s most eminent tribute to the sport that, conclusively, shaped him into the artist he is today?

Henry Mansell is a Birmingham, England native infatuated with Hip Hop music and culture. His favorite questions is, ‘Who’s Your Top 5? Dead or Alive.” Alongside HipHopDX, Henry is a daily contributor for Battle Rap. Follow him on Twitter @HenryMansell.