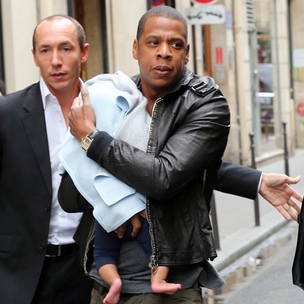 The Maturation Of Jay-Z: The Role Of Fatherhood In Shawn Carter's Life & Times

“Now I’m just scratching the surface ‘cause what’s buried under there / Was a kid torn apart once his pop disappeared.” – Jay-Z, “December 4th”

It seems Shawn Carter has submitted his early petition for “Father Of The Year.”

As the “maturation of Jay-Z-Z” barrels down manhood’s truest avenue – fatherhood – Marcy’s-finest is parking on parenting. He’s announcing closer-to-home-type ventures now, like the “Made In America” festival in Philadelphia that he’s curating, his Barclays Center directorship, his partnership with Duracell. His mentorship is getting shouted out on the reg, as if he’s practicing. Roc Nation signee, Rita Ora, describes him as “family.” Jada Pinkett-Smith gushes over Jigga’s “love and respect for Willow,” while collaborating on an Annie remake starring Jaden’s little sister. Going on record in support of gay rights is another sign of an evolved maturity. There was even a different air to his sly mention that he again planned to push to rap to the back, much less grandiose than his faux retirement in 2003. “I thought I would be more inspired to have all these feelings to talk about,” Hov told Billboard recently. “But I really just want to hang out with my daughter. I want to enjoy this time for what it is.”

Music doesn’t come much more heartfelt than “Glory” – Jay-Z’s ode to his daughter, Blue Ivy. Permeating through Pharrell’s effervescence and B.I.’s baby cries are tidal waves of emotions: joy, relief, regret, reconciliation. It’s a celebration of life, arguably his most emotive offering ever, emblazoned with everything he intends to represent as a parent. And possibly most poignantly, it signals how Blue Ivy’s birth is Shawn Carter’s chance to discontinue the sins of his father, a struggle he’s toiled with on wax over the past 12 years.

“Ya grandpop died of nigga failure / Then he died of liver failure / Deep down he was a good man / Goddamn I can’t deliver failure.” – Jay-Z, “Glory”

His is a personal narrative, but the plot is commonplace. Boo Hoo. Sad story. Black American Dad story – an afflicted tale replicated a million times over in The Land Of The Free, Home Of The Quick To Incarcerate. Statistics like these existing in the world’s wealthiest nation are criminally beyond irony, honestly. Making it through America’s poverty stricken communities – on a single parent – is like making it through Hunger Games. “No one was going to help us,” wrote Jay-Z in Decoded. “Not even our fathers stuck around.”

In the memoir, Hov describes how his pops, Adnes Reeves split when he was nine years old, leaving him with little more than an obsessive attention to detail and the seeds to a hustler’s ambition. He chronicles “cold corners far from home in the middle of the night serving crack fiends” as a sort of treacherous boot-camp subsidizing his eventual global takeover. He keenly fingers hostile government policies, like “racist drug laws that penalized possession of crack cocaine with more severe sentences than the possession of powder” as perpetuators of the epidemic – the cycle – while owning his destructive role in this twisted production. Having depended on a cagey-type cunning for survival throughout his life, in Decoded, Shawn Carter rocks his humanity like a Hublot.

Those four initial albums rarely delve into the personal, non-hustling related, life of Iceberg Slim. The opening verse on Life & Times…Vol.1‘s “You Must Love Me” sticks up like a cowlick, maybe a stray couplet darted here or there. But until 2000‘s The Dynasty Album, not much else. With Vol. 2…Hard Knock Life’s astronomical reception (Grammy Award for Best Rap Album in tow, five million records sold), Hov was approaching the paramount of Rap success, yet still saddled with the narrowing “money, hoes, clothes”-label that first decade. Then he almost threw everything away.

“I get it down / Anxiously the public can’t wait / Niggas had to have it before it’s release date / Jigga get irate / Press get it fucked up / Took me $1.8 [million] but I had to get it straight…” – Jay-Z, “Guilty Until Proven Innocent”

The macro surrounding Jay-Z’s 1999 weapon and assault charges after allegedly stabbing Lance “Un” Rivera during Q-Tip’s album release party for Amplified feels like the tipping point for Jigga’s eventual reconciliation with the absentee Adnes Reeves, (and arguably those later lyrical forays into broader aspects of the human experience). At that time there were two other major court cases taking place in New York City: Diddy and Shyne’s murder rap, and the trial of the accused plotters of the 1993 World Trade Center bombing. As he tells it in Decoded, the Hip Hop Police were in full effect and the media covered the Puffy/Shyne trial as if it were on par with the case against the terrorists. To avoid a more aggressive attack from the D.A. in the aftermath of Diddy’s eventual acquittal – and by default becoming “a sideshow for the state” – Carter settled and took probation like a Don is supposed to. S.Dot explains:

“But more than that, I realized I had a choice in life. There was no reason to put my life on the line, and the lives of everyone who depends on me, because of a momentary loss of control. It sometimes feels like complete disaster is always around the corner, waiting to trap us, so we have to live for the moment and fuck the rest. That kind of fatalism – this game I play ain’t no way to fix it, it’s inevitable – feels like realism, but the truth is that you can step back and not play someone else’s game. I vowed to never allow myself to be in a situation like that again.”

Squeaking through a dangerously close call is enough to take full stock of life – mend wounds, re-prioritize, recalibrate. That Jay-Z would notch rings like the San Antonio Spurs in the ensuing decade – dominating with stellar albums, a nearly untouchable lyrical utility belt, and a corporate strategy expected for a burgeoning Warren Buffet – is less surprising in hindsight considering he nearly became a statistic at the height of his career, years removed from those cold nights in Trenton. To a degree, he could’ve become his father (or Shyne, or DMX, or Lil’ Kim, or some other 1990s standout imprisoned at the height of his career). It makes sense that, following his settlement, Adnes crept into Jigga’s rhymes.

It was never merely the narratives that held the power in Shawn Carter’s street tales. It was the commiseration. He made you feel the hustler’s experience. The visceral emotions weaved within joints like Vol. 2’s “Coming Of Age (Da Sequel)” or American Gangster’s “Fallen” last long after playlist’s end. Hova revels in the dangerous discomfort; dances in the slippery dichotomies. His relationship with his father plays out in similar paradigm shifts. On The Dynasty – the album crafted during the “Un”-cident – “Street’s Is Talking’s” semi-olive branch is countered by “Where Have You Been’s” effusive outburst, as if he’d been waiting to exhale since he was nine years old. On The Black Album’s “December 4th,” Hov outright blames Reeves for leaving him to the streets, six tracks ahead of “Moment Of Clarity’s” detached, arguably jaded closure – a personal verse repping for an entire generation:

“Pop died / Didn’t cry / Didn’t know him that well / Between him doing Heroin / And me doing crack sales / With that in the egg shell / Standing at the tabernacle / Rather the church / Pretending to be hurt / Wouldn’t work so a smirk is all on my face / Like ‘Damn that man’s face is just like my face’ / So Pop, I forgive you for all the shit that I lived through / It wasn’t your fault, homie you got caught / In the same game I fought / That Uncle Ray lost / My big brothers and so many others I saw / I’m just glad we got to see each other / Talk and re-meet each other / Save a place in Heaven til the next time we meet forever.” – Jay-Z, “Moment Of Clarity”

Who knows how the Shawn Corey Carter story might read had that butterfly effect fluttered slightly askew. What might be the outcome had he faced murder charges rather than assault; or was sent to prison? Is he even “Hov” without Adnes’ abandonment fueling his fantastic trek to the stratosphere?

Life deals a billion what ifs. Undoubtedly Jay-Z’s considered all the ways his could’ve been different, just like all of us do all the of time with our own lives. It’s human nature. But Jigga beat the odds; beat the statistics; beat the system designed against millions from similar environments. His passport is full. Now, he’s fortifying his base, pursuing ventures closer to home, and, as he says in that Billboard interview, “…[enjoying] this time for what it is.” If Hov has it his way, Blue Ivy will never face the same sins as her father.

“Promise to never leave him / Even if his momma tweekin / ‘Cause my Dad left me and I promised I’d never repeat him.” – Jay-Z, “New Day”

Justin “The Company Man” Hunte is host of #InboxSessions and #TCMS on PNCRadio.FM, and contributor to several online publications, including HipHopDX, TanningOfAmerica, TheWellVersed.com, and Patch.com. He is a Brooklyn resident. Follow him on Twitter @TheCompanyMan.