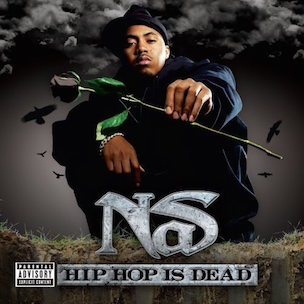 The title Hip Hop Is
Dead
probably takes one extreme or the other with most of you. Either you
say “yeah no shit it’s been dead for a
decade,” or you went on a tirade about how Hip Hop hasn’t lost a step; you
just need to look in the right places. The reality probably falls somewhere in
between the two, as there is certainly plenty of great Hip Hop on the
independent scene and still some available from major labels these days. But
for Nasir Jones, an impressionable
teenager during the early golden era and a cornerstone of the latter golden
years who probably doesn’t stay up the MF
DOOM’s and Brother Ali’s of the
world, it’s pretty justifiable for him to toe tag the genre of which he has
seen the apex.

Provocative title aside, LP number eight from God’s Son is likely his most
anticipated since his untouchable debut 12 years ago. After engaging in Hip Hop’s
battle with Jay-Z in 2001, he and
the Jiggaman set an example for the
rest of usually childish Hip Hop community by making peace last year. The surprises
continued several months later when Nas
left Columbia for Def Jam, the label
that Jay-Z presided over. Some saw
it as Nas conceding defeat, others
only saw it as a means to two of Hip Hop’s all-time greats to finally rhyme
side-by-side.  Either way, there is no true Hip Hop head that isn’t
curious as to how this album turns out.

There are really only two things that have ever hindered Nas’ career: his beat selection and his
extreme shifts in content. But when he does what he does, his talents are
baffling. Put him in a room with a mic, and only a few emcees in Hip Hop’s 30
some years can be mentioned in the same breath.  Fortunately with the
likes of Dr. Dre, Scott Storch,
Will.i.am, Kanye West, and L.E.S.
on the boards, production isn’t much of a concern. The album kicks off with the
sinister “Money over Bullshit,” and Nas
gets it warmed up talking some smack. Aside from the next song and sole weak
track on the LP (“You Can’t Kill Me”), the album never looks back.

The Scott Storch-produced
“Carry On Tradition” is one of the many jewels on Hip Hop Is Dead; “Hip hop
been dead, we the reason it died/wasn’t Sylvia’s fault or cause emcee’s skills
are lost/its cause we can’t see ourselves to boss/deep rooted through slavery,
self hatred/the Jewish stick together, friends in high places/we on some low
level shit/we don’t want niggas to ever win.” Nas holds court here and caps the song off with just a ruthless
second verse tearing nameless emcees to bits; “do anything to get in the game/mixtapes you spit hate against
bosses/hungry fucks are marvelous/you should be tossed in a pit full of
unfortunate vocalists/niggas I coulda wrote ya shit/I had off time, was bored
with this/I coulda made my double LP just from sampling different parts of
Nautilus/still came 5 on the charts with zero audience/the lane was open and
y’all was droppin that garbage shit/y’all got awards for ya bricks, it got good
to ya/ya started telling the bigger dogs to call it quits.” “Where Are They
Now” is a telling song for the album, not just for the vicious break beat but
for Nas waxing nostalgic about lost
emcees. Given the concept of the album, a fairly reflective theme underlies the
entire LP. “Can’t Forget About You” follows a similar, albeit more personal
subject. The melancholy vibe is just as effective backed by an ill will.i.am production. The smoked out “Blunt
Ashes” (produced by Chris Webber –
yes, THAT Chris Webber) , is the
most moving of these wistful joints – one of those songs where Nas’ poetic brilliance leaves you
shaking your head.

Getting back to will.i.am
for a second, the stupid-talented producer steals the show with the album’s
title track and lead single. While I do think that using the same recognizable Iron Butterfly sample on back to back
album singles is retarded, but you just can’t front how incredibly will.i.am flipped it (putting “Thief’s
Theme” to shame). The track reaches a goose bump inducing climaxing in the
final verse that starts over little more than chants of “Hip Hop” before the
beat comes back in piece by piece. And of course, Nas slays it from front to back. The albums other moment liable to
give you chills is when L.E.S.’s
royal horns blast, sounding like he is introducing a king, or well, two of
them…yeah we can feel the magic baby. Hip Hop’s most legendary rivalry has
finally culminated in “Black Republican,” the Hip Hop equivalent to a wet
dream. Who has the better verse? Too close to call if you ask me.

Jay-Z isn’t the
only superstar Nas brings with him,
he is joined by a few other marquee names that all rise up to the occasion. Game returns the favor for “Hustlers”
and turns in another great performance alongside Nas, ironically rocking over a sinister Dr. Dre beat. Snoop also
lends some California love for the butter-smooth, Scott Storch-produced “Play on Playa.” “Still Dreaming” finds Kanye West lending both a beat and a
rhyme, though his great verse (and beat) takes a back seat to Nas’ usual wise perspective. “Not Going
Back” finds Nas imparting some more
of that wisdom; “first class flights,
diamonds in ya crucifix’s/all those things, you still ain’t really doin’ shit
kid/cause in reality, I learned my salary/the way I flaunted it then would now
embarrass me.“

Much like Jay’s
recent effort, Hip Hop Is Dead is an
album for grown folks. Nas isn’t
like some of these other men who are thirty plus still acting like – and
rapping to – kids. Mr. Jones is
penning verses from the perspective of a man with years in the game: “a vet, a general, don’t step where I walked
in/make your own path, be a legend in your skin/make your own cash, don’t
stress what I’m flossin/don’t expect more when you put in less work then all
them.” Just 16 when he turned the Hip Hop world on its ear on “Live At The
BBQ,” Nas’ life has unfolded on wax
over the last 15 years and we’ve all been here listening.

Illmatic remains
not just the standard bearer for Nas’
career, but for Hip Hop in the last decade. So comparing this or any album to
it doesn’t make much sense as its pretty unlikely that we’ll ever see an album
as good. Nas has made some great albums
between this and his debut, but It Was
Written had Nas torn between
himself and label pressures. Stillmatic,
as good as it was, was overrated because it was just so exciting to have Nas return to form after the disaster
that was Nastradamus. God’s Son was lyrically brilliant but
had some lulls on the production tip (and no, The Lost Tapes doesn’t count as it wasn’t a real album). Make no
mistake about it, this is the best body of work Nasir Jones has made in 12 years. The title may be an obituary, but
the album proves that Hip Hop is alive and well when it’s in the right hands.
So here is Nas – never on schedule,
but always on time.