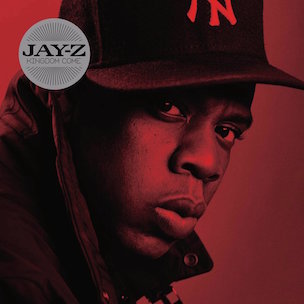 Kingdom Come comes
with impossible expectations; anything short of a classic album is going to
leave most Jay fans let down. Jay-Z may just be Hip Hop’s greatest
emcee with among its finest catalogues, but that doesn’t make these
expectations reasonable. A few near-unanimous classics shouldn’t cloud the fact
that he has more than a handful of flawed albums his fair share of ghastly
songs. People acted like his sub-par single “Show Me What You Got” was a crime
against humanity. Shiiit, I’ll take that over the likes of “The City Is Mine,” “Sunshine,”
“Do It Again,” “Excuse Me Miss” or “Bonnie & Clyde ’03.” He may be the god
emcee, but not everything he makes is the gospel.

One thing lacking here coming off The Black Album is his hunger to prove himself and seal his legacy
once and for all. Black was a
statement album from front to back, he was closing the chapter on his career
and out to prove beyond a reasonable doubt he was the greatest. This album is
obviously under very different circumstances – a triumphant return that comes
in the wake of his cemented legend. It’s kinda like Jordan
coming back with the Wizards – in
more ways than one given their management titles. You can say he has to prove
his mettle amongst the young guns – but let’s be serious, does Jay need to show he can run alongside Yung Joc, Jibbs or Young Dro? Jay could outrun any of these rookies with
no legs, and let’s face it – all those post-retirement verses erased any doubts
of a dull pencil…or, mind…you get the point. This isn’t an LP to show and prove,
it’s to show out, show that retired, un-retired, emcee or president, nobody has
a swagger like Hovi.

The album definitely has its high points and low points;
upon the first couple listens most people are only going to notice its lesser
points. There are a few lackluster songs: the aforementioned “Show Me What You
Got,” the horrific Neptunes-produced,
Usher and Pharrell-featured “Anything,” and the Beyonce-assisted Hollywood.
While the latter does have a great message, and Hov’s flow is liquid on both “Hollywood”
and “Anything,” it can’t save the songs. Speaking of flow, that is a shocking
flaw on the album. Jay-Z, a man with
one of the greatest flows of all-time, isn’t riding beats how we’re used to
here. His struggle to wrap his words around Just Blaze’s dynamic drums on “Show Me What You Got” is telling, Jay just doesn’t dance around the beat
like we’re used to. It’s as if he is far more concerned with us catching every
clever syllable than he is riding the beat (see: “The Prelude”). It happens
again over a Just Blaze production. “Oh
My God,” the LP’s best beat and a Blaze
banger to this highest degree isn’t exactly blessed by Jigga. He sounds much better on the second and third verses, but it
still isn’t the dexterity we’re used to. The same can be said on the sinister Dr. Dre track Trouble. In one of the
few songs where Jay lets his gangsta
out, his delivery is pedestrian for the most part. Perhaps he wasn’t able to do
much over what sounds like Swizz Beatz
doing a bad Eminem imitation, but Jay only redeems “Dig A Hole” with his
vicious darts at Cam’ron and Dame: “silent partner I hear you loud and clear/you left your fingerprint/you
ain’t gotta be there/…niggas like Hov
why don’t cha get at old boy/why kill the puppet and leave Gippeto alive?“

I won’t say the rest of the LP is same ol’ Jigga, cause it’s really a new look for
the Brooklyn boy. To put it quite simply, Jay
is acting grown. At the age of 36, Jay
shouldn’t be trying to make music for teenagers, and incidentally he’s made his
most mature album since his debut ten years ago. Reasonable Doubt stood out from the pack because it was an adult
look at street life, full of consequences and regrets, not just the usual “I’ll
kill this and sell that” gangsta rap. “30 Something” is the album’s defining
track here, as Hov shuns the Hip Hop
excesses that he once popularized; “I
ain’t got the bright watch/I bought the right watch/I don’t buy out the bar/I
bought the night spot.” For those of us who aren’t wearing 5XL clothing,
fake platinum chains and New Era’s 4
sizes too big, the song’s sensibilities ring true (even if we aren’t rolling in
Phantoms). The maturation continues to show on “Lost One,” “Minority Report”
and “Beach Chair.”

Over Dre’s gentle
two-bar piano loop, “Lost One” has Jay
opening up about relationship struggles with estranged friend and partner Damon
Dash, his split with Beyonce two
years ago and the death of his nephew. “Beach Chair” heads further into his
psyche as he struggles with karma; “see I
got demons in my past so I got daughters on the way/if the prophecy’s correct
then the child shall have to pay/for the sins of her father so I barter my
tomorrows/against my yesterdays in hopes that she’ll be okay/and when I’m no
longer here to shade her face from the grey/I’ll give her my share of Carol’s
daughter/and a new beach chair…” “Minority Report” is the most shocking to
the system though, as Jay silences
the criticism most often levied at him by speaking on the broken levees. He
doesn’t just criticize the government for their incompetence in dealing with
the Katrina victims, he turns the criticism on himself for only giving money
and not his time (it ain’t too late!).

For some, all they want from Jay is some devastating quotables, those shits that require the
rewind button. There aren’t as many here as most would like, but when he brings
the clever he still does it like few others. From the blazing title track; “and I’m so evolved, I’m so involved/I’m
showin growth, I’m so in charge/I’m CEO’n, yeah going to God/I’m so indebted I
shoulda been deaded/selling blow in the park/this I know in my heart/now I’m so
enlightened I might glow in the dark.” On Kanye’s understated dope “Do U Wanna Ride”: “kingpin of the ink pen/monster of the double entendre/coke is still my
sponsor/the cola, yeah/Hova still gettin’ it in with soda/diet, no sir, I ain’t
lose no weight/started from the crates now I’m sittin on a whole case“

I think it’s safe to say a lot of people are going to be
disappointed by Kingdom Come, as this
is not on the level of Reasonable Doubt,
The Blueprint or The Black Album, and I think most were expecting his grand return
to be in that class. Will it be unfairly called wack because of that?
Certainly. Yes, the production could be better – he seemed to have picked the
most basic Dre beats possible (compare it with what Snoop just got). Yes, his
flow could have been better. Yes, there are some wack songs. Those points are
hard to dispute. But what may cause the most arguments is that S. Carter seems to be representing Park Avenue more than the Marcy Projects on this album.
True, false, or irrelevant? It really depends on what perspective you take.
Ultimately, it is perspective that makes this a special album. We’ve got a
crack dealer-turned-rapper-turned-Def Jam President, a perfect personification
of how hip-hop has grown, making music to reflect that. Take off the blazer,
loosen up the tie…