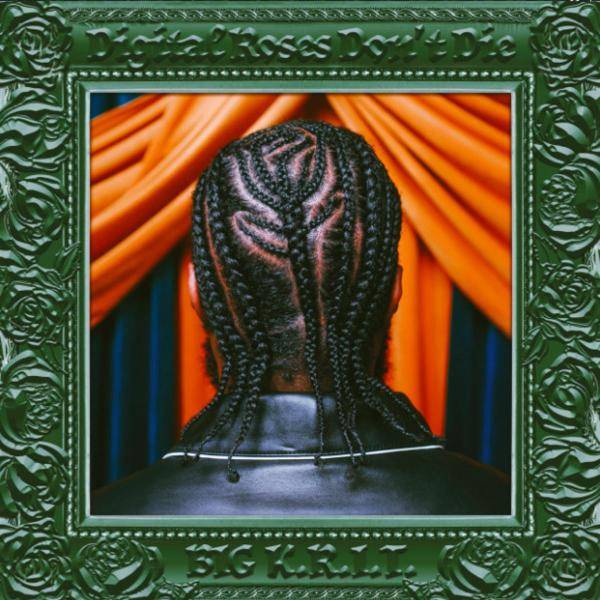 Somewhere between hometown hero and veritable legend stands Big K.R.I.T., who has accumulated a legion of die hard fans for his decade of high octane country rap. He’s mainstream enough to unleash lyrical torrents alongside some of the biggest rappers in the world (as he did on “1Train”) but still niche enough to have full control over his creative process and the product of his labor. The independence to go wherever he wants is proved beyond a shadow of a doubt with his new album, Digital Roses Don’t Die, a funk-filled switch up that, at its best, showcases K.R.I.T.’s versatility but at its worse, sounds like a half-notch above a cheesy blues bar band.

K.R.I.T. is primarily known for making bangers that give subwoofers a terminal illness, but there’s a vein of smooth, jazzy R&B that has persisted throughout his lengthy career. So, even if his venturing into these underserved realms is not out of left field, devoting an entire album to them certainly is. For fans of Big K.R.I.T, the clever, endlessly charismatic wordsmith, this album is a funky slap in the face. On top of the change of genre, demeanor and primary mode of delivery, Digital Roses has just one feature. All of these bold creative choices coalesce into what’s undoubtedly the most unique album in K.R.I.T.’s discography but not close to the best.

The album hazily traces a romantic relationship, from meeting to separation, and is broken up by interludes into four sections named after the Aristotelian elements: Fire, Earth, Water and Wind. Fire is the passion of meeting, Earth is being grounded by familiarity; Water is having passion doused by comfort; Wind is the ashes of a relationship being whisked away by forces beyond either participant’s control. But honestly, these themes have no bearing on the sound of the album, and the lyrics are neither specific nor heartfelt enough to make the listener care about the loose story. K.R.I.T. doesn’t sound in love during the first half, and he doesn’t sound sad or even distraught in the second half. This mutes the entire narrative.

While the album fails as a love story, it partially succeeds as a treasure chest of soulful funk, often justifying this severe artistic departure. “Show U Right” and “Rhode Clean” are so naturally funky and sure-footed that Big K.R.I.T.’s lack of hard-hitting bars isn’t completely missed. But he doesn’t abandon his rapper roots entirely. The bars come through on “Just 4 You” and “All The Time,” two dexterous offerings that show K.R.I.T.’s artistic dimensions coexisting. “Just 4 You” in particular marries the artistic styles K.R.I.T. tries to balance throughout the album, charged with K.R.I.T.’s signature southern bars, with the instrumentals chopped to mix in the neo-soul funk production. It’s the most success he finds and making his ambitions come to life.

Small moments like the twangy, ear worm chorus on “Would It Matter” or the lucid, bouncy second verse of “It’s Over Now,” almost make one believe that maybe this was the music K.R.I.T was destined to make. He’s no secret to retro-futurism, growing up as a huge fan of the Dungeon Family collective. He’s dabbled with funk elements in the past as well, making Digital Roses a curveball — but not a complete surprise.

But for every highlight, there are confounding decisions that make the album feel like a misstep. The interludes kill any momentum from the album and the story it tries to tell. “Southside of the Moon” almost has a beat and the red-lit “Cum Out To Play” is almost a song. While the former appeals to the brain rather than the ears, serving as an exposition dump as if Zack Snyder EP’d the album, the latter tries and fails to arouse anything but confusion and the bad kind of awe. K.R.I.T. does a Playboi Carti impression on the second half of the breakup anthem “Wet Lashes & Shot Glasses” that makes as little sense on paper as it does in the context of the album. “Boring” tries to be a cheeky joke about how his girl loves the less exciting aspects of their relationship but falls flat because the song lives up to its name with unimaginative lyrics and tepid production.

The risk of Digital Roses Don’t Die is greater than the reward. It certainly isn’t a total miss, but only a handful of songs have any staying power. The listening experience is also too easily navigable for an artful love story and too scattered for the mainstream. The bold direction K.R.I.T. took this album and the commitment he had to himself as an artist is commendable, going for a new style rather than resting on his laurels.

But when the greatest commendation for an album is that an artist tried something new, it is not likely to amaze. The ambition of Digital Roses is also its downfall, leaving K.R.I.T. with pieces of a good album but not coming close to completing the puzzle.

Honestly, Big K.R.I.T. as a producer doesn’t get enough credit and acknowledgment.

Big K.R.I.T. – Digital Roses Don’t Die
Not a fan of the throwback trend we've seen lately and thought it didn't fit with Krit's style, but he started to make it into his own by the end. Interlude's suggest more depth than here, but all-around still fun/sharp enough
7/10 pic.twitter.com/pPT7s1bqdc