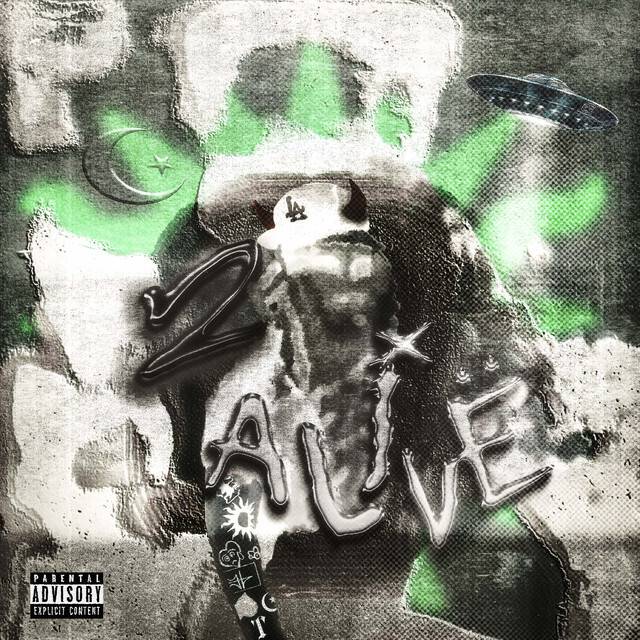 Portland rapper Yeat took over the internet with his euphoric rage music in 2021. Viral SoundCloud singles such as “Money Twerk” and “Sorry Bout That” gained even more traction as Yeat became a TikTok darling that same year, spawning memes aplenty. The codeine-drenched bars of his mixtape Up 2 Më oozed into every pocket of the music industry. Originally released last September with moderate success, Up 2 Më eventually exploded onto the Billboard charts in December 2021 where it has steadily climbed the ranks.

2 Alivë, the follow-up to Yeat’s breakout project, arrived to a sea of hype and high expectations. Though he didn’t expand beyond the sounds of his previous work, Yeat’s latest is a master class in precision and knowing what the audience craves. Excellent rap need not always be grand in scope: 2 Alivë proves success can come just as easily through zooming in.

Playboi Carti’s influence on the rising class of rappers is overt, but to call Yeat a byproduct of Carti would be disingenuous. Evidenced by tracks such as “Poppin” and “Rollin,” it’s apparent that the “Sorry Bout That” rapper was just as steeped in the sounds of Travis Scott, Young Thug, Lil Uzi Vert and Future. But while he occasionally looks to those who came before him, Yeat is far from referential. The militant and Auto-Tuned gruff of his voice is shrouded in a dark malaise.

Take for instance the drug-induced nightmare of “Luh gëek,” a frantic fever dream where his vocal acrobatics stand out. His voice overlaps on itself and splinters into anxious fragments, creating a bewildering sense of motion and chaos. His music is overwhelming and deceptively complex as he adds layer upon layer of textures and vocals. But his lyrics leave a lot to be desired, made up for by dropping off quotables destined for Genius lyric screenshots. “Osama Laden My Bro,” he raps without irony on “Rollin.” “The Tonka fit so many, it still can’t fit in,” he says playfully to a girl trying to pull up in his truck, one of several shoutouts to his Tonka Truck, a reference which starts fun but quickly grows old. The moodiness of the project holds the album together, but lyrically Yeat struggles to make much happen.

If the albums were shuffled, it would be difficult to determine which songs came from Up 2 Më and which came from 2 Alivë. While the world building Yeat manages between the two projects is fascinating and engulfing, 2 Alivë feels like an attempt to capture the magic of Yeat’s rise and reposition it for commercial success. The album falls into a familiar cycle of groundbreaking moments squeezed for a longer lifespan. Travis Scott’s Days Before Rodeo was repurposed into Rodeo, as was Pop Smoke’s Meet The Woo and Lil Uzi Vert’s The Perfect LUV Tape. Culture-shifting moments are repackaged and replicated with the hopes of bringing back these past successes, but these attempts sometimes fall flat of the desired outcome. If fans want to see that phenomenon in real time, they only have to look at Bobby Shmurda’s career in recent years.

The edges may have been sanded a bit, but the appeal of Yeat isn’t lost from a bigger budget. The commercialization of  Yeat’s sound through his deal with Interscope Records also brought some welcome changes. From start to finish, the production and sound quality of 2 Alivë helps emphasize the nuances of Yeat. More resources also means Yeat was able to bring in big-name collaborators from Young Thug to Gunna, who contribute to two of the album’s best songs in “Outsidë” and “Rackz got më.” It also enabled Yeat to season the crisp, buzzing flame of “Doublë” which sounds like it was ripped from a ’90s arcade and soaked in lean.

Though its re-appropriation didn’t erase his raw appeal, certain moments of 2 Alivë sound stale compared to his debut, as though the tracklist was bulked-up to draw in higher streaming numbers. The average Yeat fan won’t find many skips on 2 Alivë, but they may grow tired of the banality and purposelessness of tracks such as “Call më” and “Taliban,” which expand little on Yeat’s vision. “Luh m” featuring SeptembersRich is technically sound but pales in comparison to the rest of the tracklist.

Yeat is an atmospheric rapper, building a castle made from grimy F1lthy beats and incessant choruses. His raps aren’t linear, nor do they fall into the traditional sense of narrative. He’s also still learning his craft. Experts in this field such as Future and Playboi Carti construct vast and intricate worlds for listeners to explore, but at times Yeat’s work can feel vague and immature. He may not be ready, but his music has already begun to soundtrack a universally shared feeling for Generation Z. Not everyone will love him, or even understand his appeal. But many times feelings can’t be explained, only understood. You either get it or you don’t.

Good artists make hits. Great artists make moments. Although 2 Alivë doesn’t feel like a game-changing album, it will have a large impact on bringing rage music to the mainstream, already tracking to takeover the Billboard charts. Yeat may take inspiration from the Trap and SoundCloud icons who came before him, but his irreverent anthems have placed him in a particularly unique space, not just a part of the movement forward, but helming the charge. The question left to answer is if its success ushers in the project that can be the paradigm shifter the scene is looking for.