Review - JPEGMAFIA 'LP!' Is A Creative Sayonara To Major Labels 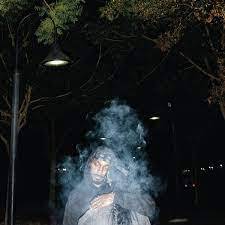 JPEGMAFIA is apparently finished with the music industry. He’s done being a cog in the machine and lining label executives’ pockets with money.

Under the notes on Bandcamp for his new album, LP!, Peggy explains his decision to part ways with the industry. “I live and die by the quality of my work, not the hype. And the minute anyone does anything to impede on that. You are dead to me.” Those words couldn’t speak truer for the 32-year-old rapper.

JPEGMAFIA built his career on the no-bullshit filter of his persona. He’s brash, blunt and never sugarcoats his words, often providing color commentary on celebrities and his peers. Throughout the heavy distortions, plethora of mangled samples and off-kilter DIY production, Peggy is always in the forefront, barking at haters, hoes and white people. He’s unapologetically confrontational.

LP!, the follow-up to 2020’s All My Heroes Are Cornballs, comes in two versions — online (found on all DSPs) and offline (only available on YouTube and Bandcamp). The offline version is 20 tracks long — two more additional songs than the online version, a rearranged track list and samples omitted due to clearance issues. LP! finds JPEGMAFIA in a familiar space; he’s on the outside looking in, entrapped in a position that stands against his principles. On one hand, he’s reaching mainstream appeal with an expanding audience. On the other, his creativity is shackled by a ball and chain, stripped of the freedom he embraced when he was independent.

Throughout the album, he pays multiple tributes to Britney Spears — who just ended her 13-year-long conservatorship under her father. On “Thot Prayer,” JPEGMAFIA interpolates Britney’s ‘99 pop opus “Hit Me Baby One More Time”: “When I’m not with you I lose my mind/Give me a sign/That’s it’s mine.” JPEGMAFIA juxtaposes his creative imprisonment with Spears’, realizing his need for rap but desires to be cut from capitalism’s puppeteer strings. He uses Spears again on “REBOUND!” but this time uses “Oops I Did It Again” as a follow-up to a threat hurled at an unknown target.

JPEGMAFIA versus the world is nothing new, but he’s direct and personal on LP! He throws shots at alt-rap duo Armand Hammer (billy woods and Elucid) on “REBOUND!” and “The Ghost of Ranking Dread,” questioning their background in relation to their namesake on both tracks. “N-ggas named after baking soda but ain’t never touched no fuckin’ coke in your city,” he raps with intensity. JPEGMAFIA is at his best and most focused when he has a specific target. His raps trimmed of fat, filled with wit and delivered like gunshots at his vitims.

The Baltimore MC gives his production more spotlight throughout the tape. As a producer, JPEFMAFIA is a master of the DIY aesthetic. The beats are simple and stripped down; like the flickering electronic sound bytes on “NEMO!” and the old school Hip Hop beat breaks on “OG!”

The spoken word intro on “Are You Happy” speaks volumes for his feelings about record labels, “Am I happy with the people around me? Am I Happy with what I’m doing?”

LP! finalized JPEGMAFIA’s contract with Republic Records, making him an independent artist again. He clearly felt artistically trapped by the standard of his label, entrapped by mindless repetition and cliche pop-rap radio. LP!, while not the full vision of what he wanted due to copyright issues and record labels’ limiting artistic rules, is a way for him to take back his creativity and, most importantly, his freedom.

If you haven’t listened to their albums yet, PLEASE DO. I’m currently relistening to LP! by JPEGMAFIA and I’m mindblown by how he makes the most odd combination of sounds sound beautiful to me.

LP! By jpegmafia has just as good a listening experience as Madvillainy

LP! is odeeee, the fact that he just threw whatever songs he had together and it ended up as that is crazy to me