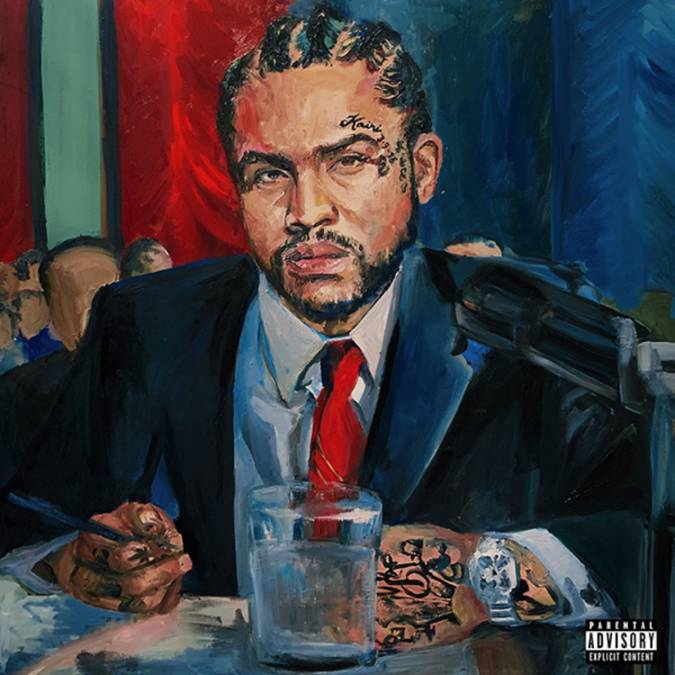 Westside Gunn and Dave East unveiled a Mariella Angela-painted portrait reimagining the Harlem rapper as Jimmy Hoffa during the Buffalo Kids Gallery event in June. Hoffa, the leader of the Teamsters, vanished without a trace in 1975. It’s theorized it was a Mafia hit sent by Hoffa’s enemies. In the painting, East positions himself on top of the food chain, the Mafia under his belt and connections throughout the city like a young Hoffa.

Following up 2020’s Karma 3, East returns to the mic after taking time to focus on his acting career. Since 2019, he’s landed roles in the Netflix film Beats and Hulu series Wu-Tang: An American Saga portraying Method Man. While Karma 3 ran a bit on the long side, East sounded like he cared about rap. On Hoffa, entirely produced by Harry Fraud, East dons the personality (or so he believes) of the presumed dead union leader, despite not ever fully making the connection.

On paper, Fraud and East’s partnership sounds exciting, but the results are mixed. On the opening track, “The Disappearance,” Harry’s production is draped in pearls and diamonds; it’s lavish and extravagant. While East sounds good, his bars swing and miss.

East clumsily raps: “These n-gga’s Bron’s son like Action.” His strengths come from his SnapBack delivery that compliments the nasal snarl in his vocals, like on the Paranoia standout “Phone Jumpin’.” But to fit Fraud’s instrumentals, he dilutes his grit, in turn lessening his presence.

On tracks such as “60 for the Lawyer” and “Diamonds,” East makes luxury sound banal and boring. The verses are littered with clichés about crashing Bentleys and smoking pounds of exotic weed. In an attempt to provide a mafioso atmosphere, it comes off as slow and languid.

When East isn’t falling into lyrical tropes, he’s reflecting on the past that haunts him on every corner. On “Just Another Rapper,” he looks back on his early days watching his aunt struggle with addiction, companions that come and go like the four seasons and the paranoia that isolates him.

“Go Off” is one of the album’s highlights, which features a hook and solid verse from G Herbo. East sounds lively, bouncing off Fraud’s strings and trap drums. He’s at his best when working with faster tempos, especially on “The Product,” delivering a vintage performance where it’s easy to get wrapped in his energy.

The most personal cut comes on “I Can Hear The Storm.” East finds himself going through the fire and brimstone of his traumatic past. East raps with glass-shattering sincerity, his truth spread across every bar.

East sounds much better when he isn’t competing for airtime with features, lacking chemistry with many of the guests. The album’s closer, “Red Fox Restaurant,” opens with a Curren$y verse that sounds disconnected from East’s. Benny The Butcher delivers an exceptional verse on “Uncle Ric,” but East sounds lost, like he’s rapping on a different song. It’s strange this track fails so hard, because Benny and East lit it up on their Karma 3 collab, “Stone Killer.”

Though sometimes, it’s not East’s fault. French Montana’s verse on “Count It Up” does him no favors, sounding like it wouldn’t even excite a retirement home. Then there’s the overt try-hard attempt for a radio hit “Dolla And A Dream,” which features a painful chorus from Bronx singer Steven Young.

Despite all the features’ failures, there’s no denying the bond shared between Dave East and Kiing Shooter — who tragically died last year due to liver failure. On “Yeah I Know,” they are a natural combination, like hydrogen and oxygen. East sounds more comfortable with Shooter, providing a hook that sticks to the ribs. Shooter raps like an extension of East, providing a verse nonchalantly warding off his enemies. When working in conjunction with each other, they’re an unstoppable brotherhood.

At times, East sounds rejuvenated and hungry on Hoffa, but those instances are too far and between, muddled by desires for radio play and playlist fodder. Hoffa isn’t a staple in Dave East’s catalog by any stretch. The features are aimless and disconnected; East’s slower delivery bogs down his impact and the sequencing provides an unbalanced listening experience.

Hoffa doesn’t live up to its obvious potential, but it makes one wonder what’s next for Dave East and his relationship with Griselda. Jimmy Hoffa’s rise in power came from doing what’s necessary out of sustainability and survival. East is no different in that sense, but he can’t live up to the legend of Hoffa, no matter how much he tries to make the comparison stick.

2nd time listening to the HOFFA project straight through. @HarryFraud production is flawless and if you mixed it… Bruh! Beautifully done. @DaveEast on point as usual with that #Harlem shit! 💪🏽💪🏽

Hoffa is 2.5 mics at best for me which is average.

The rapping isn't that great, the beats are meh and the songs are nothing special.

This is coming from a Dave East defender.