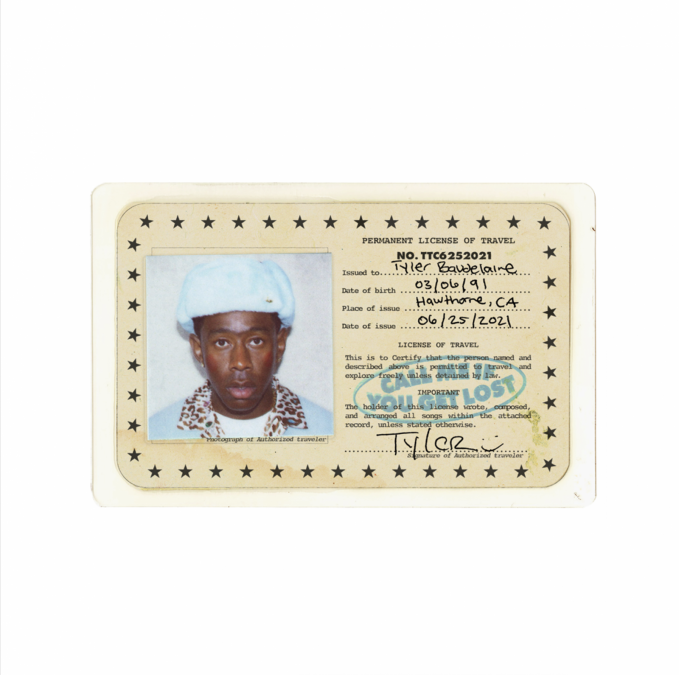 Tyler, The Creator officially returned to the spotlight on June 25 with CALL ME IF YOU GET LOST, the follow-up to 2019’s Grammy Award-winning album IGOR.

As if by magic, Tyler somehow remains in the unique position where he has both mainstream appeal and the respect from underground Hip Hop nerds who appreciate his willingness to dance along the fringe of full-blown pop star.

Simultaneously, he consistently pushes the boundaries of what is considered “politically correct” and revels in his ability to ruffle feathers much like he did with Odd Future. As he says on the “MANIFESTO,” he was “canceled before canceled was with Twitter fingers.”

With CALL ME IF YOU GET LOST, Tyler swings between boastful bars about his “other other other other crib”and multiple Rolls-Royces to a refreshing vulnerability often underrepresented in a culture that typically expects men to be emotionless.

After being introduced to international traveler “SIR BAUDELAIRE” — the “spaced-out n-gga with the chunky ears” — the second track “CORSO” is a full-on confessional about his relentless attempts to woo a woman away from another relationship and the pain he’s experiencing as a result, a common theme throughout the project.

“Turn the fuckin’ noise up, ah, n-gga, my heart broken,” he raps. “Remember I was rich so I bought me some new emotions/And a new boat ’cause I rather cry in the ocean.”

The blatant dichotomy between emotiveness and almost blind arrogance peppers nearly every track, shedding even more light on who Tyler is beneath the surface.

And Tyler, The Creator isn’t afraid to get honest — whether he’s seemingly touching on past trysts with men on “MASSA” (“Everyone I ever loved had to be loved in the shadows”) or admitting he owed pop princess Selena Gomez an apology on “MANIFESTO” (“Apologized to Selena Gomez, back when I was trying to fuck Bieber/Justin, I say it with my chest out, you say it with your chest in).”

As he bravely confesses on the over eight-minute “WILSHIRE”  — recorded in one take — he’s in love with his friend’s girl and scoffs at the notion of “bros over hoes,” while urging her to delete all of their text exchanges even though there’s nothing “incriminating.”

Musically, the album almost feels like stepping into an Austin Powers film with its ’60s-inspired flutes and Quincy Jones’ 1967 “Soul Bossa Nova” instrumental undertones. Sandwiched between the reverberating bass on songs such as “LEMONHEAD” featuring 42 Dugg and “JUGGERNAUT” with Pharrell Williams and Lil Uzi Vert, Tyler effortlessly illustrates his versatility behind the board.

Album highlight “SWEET/I THOUGHT YOU WANTED TO DANCE,” the second longest track on the record, is another example of Tyler’s genre-bending abilities. Toward the middle of the track, the beat switches up into a dancehall rhythm, while still allowing Tyler, Brent Faiyaz and singer Fana Hues’ vocals to take centerstage. It’s a welcomed break from the jackhammer driven into the listener’s head on the brilliant yet unrelenting “MANIFESTO.”

A short five minutes later, he’s back at an insane tempo with the aforementioned “JUGGERNAUT,” which features co-production from Pharrell. His contributions are painfully obvious with the raucous drums hitting much like the song “LEMON” featuring Rihanna did from N.E.R.D’s 2017 album No One Ever Really Dies.

Then there’s Lil Wayne and Tyler’s rap ping-pong on “HOT WIND BLOWS,” which drew comparisons to Michael Jordan and Scottie Pippen of rap on social media. But hearing Wayne still spit about lean and how it hasn’t made him “senile” yet isn’t all that impressive, although his delivery is tighter than ever. Similar to NBA YoungBoy, who feels willfully misplaced on “WUSYANAME” alongside the soulful crooning of Ty Dolla $ign, it’s a slightly strange match (despite Wayne linking with Tyler for the Flower Boy track “Droppin’ Seeds” five years ago).

But as Tyler spells out on “BLESSED,” he’s on top of the world — the only flaw is his “fucking hair won’t grow.” Even without the woman of his dreams, he’s still grateful he fell in love. Closing out the album, “SAFARI” ends on a high note — at least when it comes to Tyler’s confidence in his craft.

“I’ll keep it a buck fifty, y’all can’t really fuck with me (Ugh),” he raps. “Bitch, I got the fuzz and I’ma own it ’til they bury him/Only twenty-nine but I’ve been focused since thirty M” — and there’s no doubt he has another 30 M to go.

UMMMM THIS WAS ME LISTENING TO CALL ME WHEN IF YOU GET LOST ?????? BECAUSE WHY IS THERE NO FUCKING SKIPS — SWEET/ I THOUGHT YOU WANTED TO DANCE – IS MY FAVORITE ? HE REALLY DID THAT WE SEE U TYLER pic.twitter.com/20uFNhjO7P

call me when you get lost is absolutely golden. vocals, drum breaks, loops,backup vocals,,, just genius. tyler just pulls it off better and better each time. 10/10

Only thing that sound good on that Tyler creator tape is drama yelling in the bacc, he trash