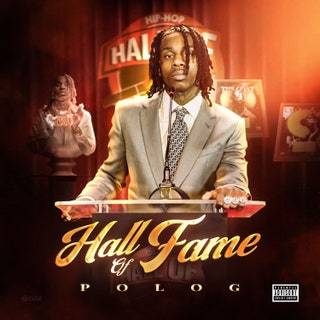 Polo G is only 22 years old but speaks with the maturity of someone who has lived twice as long. This type of maturity is earned through struggle and the trial and error of finding one’s own path to success, regardless of the roadblocks. Tales and lessons from the hardships of the Chicago streets have been defining themes of the blossoming rapper’s work, launching him into stardom through early tracks such as “The Come Up” and “Neva Cared.”

His rough upbringing made Polo who he is today — but they came with a cost. On his latest project Hall of Fame, Polo recounts his journey, opening up about feelings of survivor’s guilt and PTSD but this time with a more optimistic view. Hall of Fame, which arrived on June 11, has already proven to be his most commercially successful project to date, netting him the top slot on the Billboard 200 and No.1 on the Hot 100 for its lead single “RAPSTAR.”

From his 2019 breakout album Die A Legend to last year’s THE GOAT, Polo has always been a vivid storyteller. But on Hall of Fame, his songwriting and introspection have reached new heights. Throughout his latest effort, the “DND” rapper weaves together narratives of addiction, loss and succeeding in spite of his obstacles.

The Chi-Town native comes across divided, someone mourning the loss of his fallen friends on tracks such as “Painting Pictures” and the heartbreaking “Epidemic.” But listeners are also shown someone celebrating breaking free from their struggles, looking contently at the new lane he’s carved out for himself. This notion of survivor’s guilt isn’t necessarily new to Polo’s music or Hip Hop at large, but Hall of Fame’s masterful sequencing and seamless blend of discordant elements is revelatory.

The project is more polished than most of Polo’s previous work, but his bite hasn’t dulled like on the aggressive “GNF (OKOKOK).” Similarly, he spars with his peer G Herbo on “Go Part 1,” spitting clenched-teeth, aching verses about the clashing feelings of success: “Twisted nightmares on the Maybach pillow,” Polo raps, highlighting the dichotomous nature of newfound money.

There’s a new sonic landscape present on Hall of Fame, as Polo sets aside his signature piano-backed beats, instead opting for a broader range of instrumentals, like the delicate guitar loop on “Epidemic” produced by Tahj Money, D Mac, LondnBlu and Karltin Bankz. Even the beats with piano loops have improved dramatically. The Rod Wave-assisted “Heart of a Giant” features stellar vocals and a gorgeous piano loop that sounds like it was recorded off of a 1970s cassette player, further showing his musical growth.

His approaches to the trauma and tragedies of his come-up have changed; no longer does he rely on pills to ease his mind. Money and fame can only go so far, something Polo has learned over his career thus far, and it seems he now finds strength in perfecting his craft. As he continues to process the traumas of his life, Polo’s music has grown increasingly vulnerable and stripped from the tropes of Drill.

There are moments on Hall of Fame which detract from the album’s cohesion. “Broken Guitars” with Scorey is painfully corny and holds little emotional impact, especially compared to the album’s more vulnerable moments. “Losses” with Young Thug is disappointing considering the star power present on the track. But these moments are minor hiccups on an overall stellar album.

On “No Return,” which also features Lil Durk and The Kid LAROI, Polo raps, “Lil kids turned grown men, we come from cribs dysfunctional/Gotta learn how to play your own hand, don’t get too comfortable.”

In the past, Polo has struggled to find his way after the chaos of the streets. While it’s clear he’s still haunted by what he’s seen, the growth he exhibits on Hall of Fame is testimony to his confidence, determination and dedication to the music. Once a student of Hip Hop, seeking guidance from the likes of Gucci Mane, Lil Wayne and 2Pac, Polo has become what he once admired — a bard, leading the next generation from the streets to the spotlight.