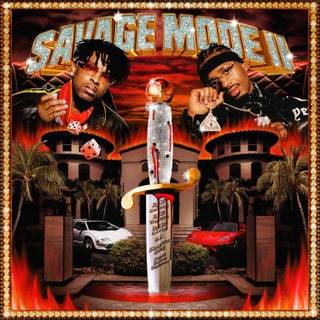 When 21 Savage and Metro Boomin dropped their collaborative EP Savage Mode in Summer 2016, the project brought the rap tandem further into the spotlight. Metro went on to become one of the most in-demand producers at the time, earning a Billboard No. 1 album and constructing hits for Drake, Future, Migos and more. Savage, on the other hand, became a Grammy Award-winner and a chart-topping artist with multi-platinum records.

With its dark production and violent, aggressive lyrics about murder, robbery, and drug dealing, Savage Mode introduced listeners to the man who calls himself a savage with no heart. Following an inactive 2019, 21 and Metro hinted at Savage Mode II earlier this year, but fans had to wait a full nine months for the tape to drop. Fortunately, the wait was well worth it as Savage Mode II shows a return to form for the superstar duo.

Right from the start, Savage Mode II opens on a cinematic vibe with an unexpected feature from Morgan Freeman, who gives a monologue over a haunting, piano key instrumental. In his speech, the legendary actor speaks on the idea of two forces that complement each other coming together and becoming something even more powerful — a fitting introduction into the thrill ride that Metro and 21’s third collaborative album is.

Savage Mode II shows how well a producer should know the capabilities of a rapper. Metro sets 21 up with speaker-rattling production that fits so well with the Atlanta rapper’s grim tales of violence in the Zone 6 streets.

On “Runnin,” Metro’s slick 808’s accompanied by the creepy sample of Diana Ross’s “I Thought It Took A Little Time” gives 21 the best canvas to paint his visceral rhymes on. The grim, minimalistic sound we heard on Savage Mode II‘s predecessor sounds fully enhanced on the sequel in so many ways. Think of an independent movie getting the big-budget money for the sequel.

The sheer confidence and comfortability in 21’s voice throughout these 15 tracks is a sharp comparison from the brooding, monotone rapper from four years ago. The bars are more polished and lively this time around like on “Glock in My Lap” where 21 raps, “Leave an opp cold, like December/.45 on me, it’s a Kimber/AK knockin’ down trees, like timber/Get your baby mama ‘fore we bend her/Hit the windshield, not the fender/Givin’ out smoke my agenda/Throw the white flag, they surrender.”

Another moment to highlight on the album is Savage’s willingness to expand his voice over a fresh variety of beats. Like on “Rich Nigga Shit” where Savage and Young Thug put on their velvet smoking jackets and rap about all their luxuries over smooth, jazz-tinged production. 21’s versatility shines on the amusing “Stepping On Niggas,” where the London-born rapper shares a hilarious story about literally stomping on his foes over Savage Mode II‘s most head-turning G-funk-inspired beat.

As good as it sounds, Savage Mode II is not perfect. There’s a portion of the album where the duo switches the whole vibe, and it feels odd. A villainous speech by Morgan Freeman that later leads into two hard-hitting, menacing songs should not go with a soft, melodic tune like the Drake-assisted “Mr. Right Now.” It sounds good, and Drake doesn’t miss with his feature, but the song just doesn’t fit with the theme of the album.

Another misstep comes when 21 sounds like he’s forcing himself on the album closer, “Said N Done.” Metro’s flip of Stephanie Mills’ “Touch Me Now” is smooth, but 21’s attempt to float over the charming beat falls short as the lyrics about his life and success sound uninteresting.

It’s been roughly three years since this duo put out a collaborative album, and Savage Mode II is a great way to reintroduce these rap superstars. The Grammy Award winner shows he continues to be ambitious as an artist while keeping up the Slaughter King mantra he ran with early in his career. For Young Metro, Savage Mode II asserts there’s no rust on his boards and proves he’s still one of the best architects in the game.

They’re a force on their own, but together, 21 Savage and Metro Boomin are one of Hip Hop’s best one-two combos.