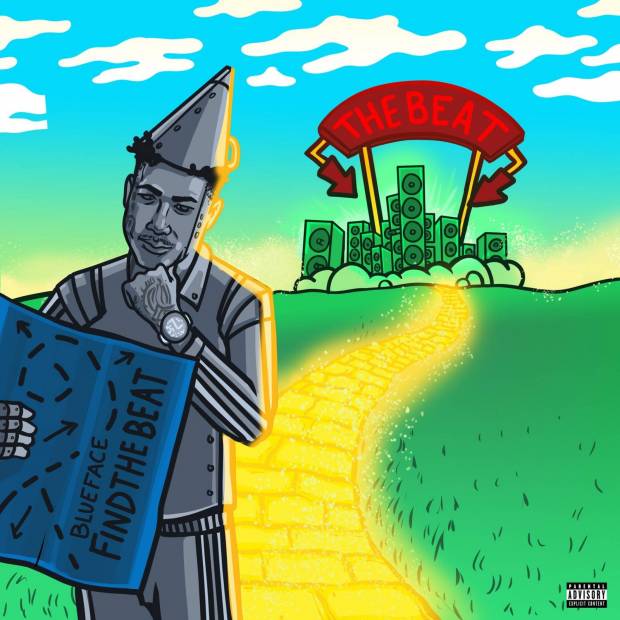 If albums were judged solely on their level of self-awareness, Find The Beat would receive no criticism. The debut studio album from polarizing West Coast figure Blueface says it all in the title. Blueface is known for a lot of things, but his unique relationship with rhythm is the biggest.

That hasn’t stopped him from making compelling songs. If anything, his off-kilter flow should be seen as a plus, helping him to stand out. His goofy lyrics can be more cringe than chuckle-worthy, but at least he has a sense of humor.

Unfortunately, Find The Beat doesn’t make a case for Blueface having any longevity. The project doesn’t even have an hour of runtime but it feels bloated. Listening to more than a few songs off this album can feel like dealing with a party guest who can’t go home soon enough.

An album isn’t going to be a new classic when its first song contains the line “Baby blowin’ dick just like a flute” and whose fourth song has “She blowin’ dick like a trumpet.” Blueface at least misses going full Lil Yachty by actually referencing instruments that require mouth usage (i.e. not a cello), but that’s not much reassurance. The latter track, “Murder Rate,” is actually halfway decent, mostly due to a vibrant beat and a formidable Polo G feature.

The guest verses tend to be proficient, mostly relying on the artist’s chemistry with Blueface. This works for some, like Lil Baby and Stunna 4 Vegas, whose energy with Blueface deserves more than the boring piano trap beat behind them. Others, like Gunna and DaBaby, have features that are only necessary listening for completists of those artists.

Ambjaay can’t save “Carne Asada,” a noxious marathon of double entendres like “She gon’ swallow nut like it’s leche” and “I’ma roll on this bitch like a burrito.” No artist would deserve the shame of being on solo duds like wannabe club hit “Viral” and “Period,” which drips with misogyny (“Why these bitches stuck up on the ‘Gram but really whores in person?”) Even worse, it showcases Blueface’s version of singing.

The best song on the album finds Blueface all to himself. “Dirty” doesn’t turn him into an introspective lyricist full of technical skill, but it has a strong hook, a good beat and clever writing (“I spent a house on a couch”). It possesses his initial charisma that attracted so many. Did that turn many off as well? Sure, but that’s part of coming up and standing out.

Forget about the beat. This lackluster album suggests Blueface needs to re-discover himself.