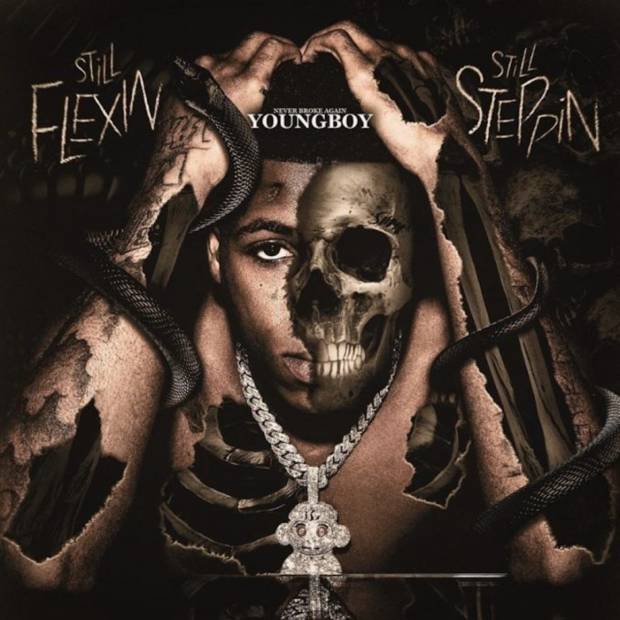 YoungBoy Never Broke Again’s career, whether we like it or not, is fast on the rise. The Louisiana native has already out-sold both Juice WRLD and The Beatles in 2019, and the undisputed “King of YouTube Rap” certainly has no shortage of fans.

But just because something sells well, doesn’t mean it’s high quality. Put it this way: both FashionNova and Givenchy make millions upon millions of dollars in sales each year, but only one makes dresses that will last past three washing machine spin cycles.

And such is the case with YoungBoy NBA’s music — specifically on his most recent offering, Still Flexin’ Still Steppin’. To put it bluntly, there’s no better example of a degression than this album. It’s perhaps not surprising that, unlike its predecessor which dinged the No. 1 spot on the Billboard charts, this follow-up effort is being held in check by — of all things — a new BTS album.

Outside of a guest appearance by minor rapper Quando Rondo, NBA kept this offering to himself. And that, in and of itself, is not a bad thing — but it’s nothing short of lazy to include songs on the album that have already been released. “Bad Bad,” “Knocked Off,” and “Fine By Time” are perfectly fine songs, on their own, but they were fine the first time they were released — they didn’t need a re-release, and certainly not if they weren’t going to be remixed in the process.

And there’s not much to be said for the new songs on the album, either. The lyrics are tired, staid, and repetitive almost across the board — “Pull up in that Rolls, I look like Batman/I’m cold right now, man, where the heater? Nigga, fuck the fan” (“Batman”), “Fuck all them hoes I fuck with, I want you to be my main, I’m just sayin’/Xanax, Percocet, and plus that lean” (“How You Want It”), and “Watch me burn before you bitches show me love/Ain’t no wrong or rights, I can’t tell you how it was/But I can tell you I was born to be a thug” (“No Understand”) are just a few of the many examples of just how banal his messages can be.

That said, don’t count YoungBoy Never Broke Again out just yet. With a little bit of a course correction, he just might be able to make it all right after all.