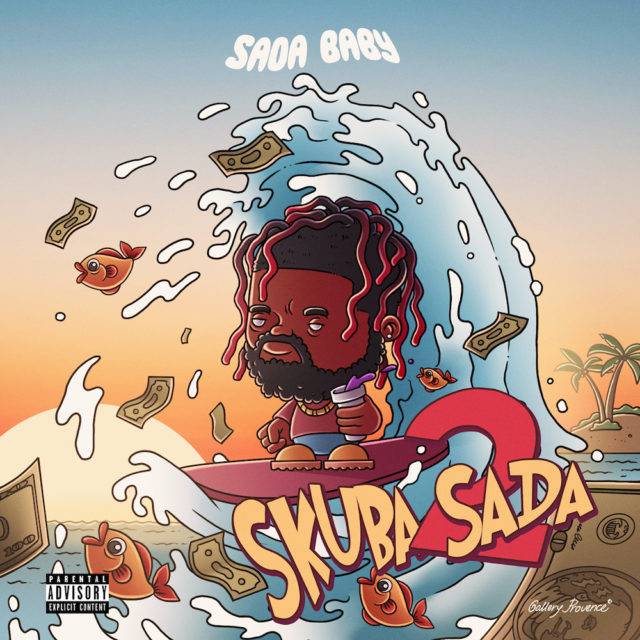 Since his breakout 2017 mixtape Skuba Sada, Sada Baby has lent his own distinctive flavor that’s made fans of out everyone from E-40 to Lil Durk. His second project released this year outside of Brolik, Skuba Sada 2 is off-the-wall, yet entertaining enough to bump due to the sheer absurdity of Sada Baby’s Megatron-like charisma.

Sada offers a Mortal Kombat level of humor and violence through opening track “Aktivated” featuring a slick Bay Area bounce accented by sampling Kool & The Gang classic “Get Down On It.” There’s a nonchalant nihilism in “Snatch a nigga heart out, good fatality (Ugh) / All I did was hit his bitch, now he mad at me / I should’ve took that nigga bricks, you can’t trap with me / I should’ve took that nigga life” before ending with “you can’t be here.” The irrelevance displayed during every single moment of Skuba Sada 2 makes up for its lack of thematic unoriginality. By the first-class opening guitar riff and recognizable drum pattern opening to The Gap Band’s “You Dropped The Bomb On Me” drops on follow-up track “Slide,” it’s easy to forgive the redundancy of “I said don’t turn me up / Please don’t turn me up, hey / Gon’ make me slide on you” when Sada interpolates Charlie Wilson’s melody confidently.

As many readers find themselves at home reading this review amidst a global pandemic, Skuba releasing the video for “Outside” could be considered modern social media trolling. However, the Trap Manny featured single finds a revealing moment in Skuda’s manic persona. Hearing him provide his testimonial bars “Now I done learned from niggas who done lied to me, ain’t that somethin’? / Now I got everything I ever wanted, came from nothin’ / I get to shakin’ somethin’, I’ma kill that nigga, he ain’t my brother / I don’t even thank my mother / She ain’t teach me shit, but bitch, it’s nothin’” lends an honest vulnerability within the Looney Toons antics.

That level of over-the-top slickness slows down once “Skubaru” turns into middle-of-the-road trap production from Dux Jones. Thankfully, Sada giving irreverence gunplay bars like “Can’t do no witnesses, my niggas out here bossin’, baby / We shoot at bitches too, my nigga be done offed your lady / Offed your best friend, like, “Go, best friend” sounds slightly amusing at the very least. That same blandness could extend to other joints including “Off White Whoop,” “Say Whoop” and “2K20” where he claims “Boy, you a bitch and a ho, and you ain’t gon’ touch me” lend the same feelings.

Skuba Sada 2 has enough charisma to somewhat make up for redundancy subject matter wise. Day-one fans should have a lot to appreciate considering this release comes less than two months after Brolik, but there isn’t enough technical prowess to satisfy traditionalist naysayers just yet.