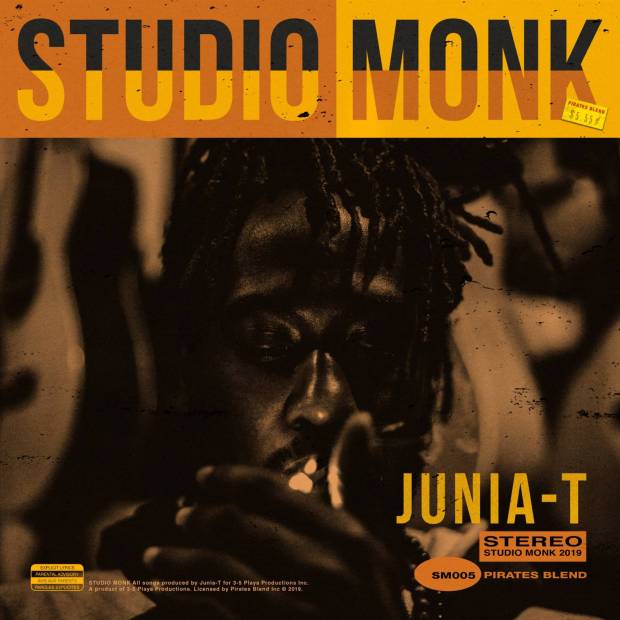 Stateside sentiment place Drake and Tory Lanez as mainstream Hip Hop’s representation of Toronto. However, the indie alternative scene has continued to thrive as well rather one is discussing individuals like Haviah Mighty, Clairmont “The” Second or even MC/producer Junia-T. Some may recognize the tenured artist as a former member of duo Smash Brovaz or solo artist who dropped his breakout 2014 project Eye See You.

Since then, Junia-T has traveled the world serving as Jessie Reyez’s tour DJ and found time to release the fairly fantastic Studio Monk album. Showcasing not only his own rapping and producing talents, the project does a great job of spotlighting some of the lesser-known talents from Toronto.

Frequent Daniel Caesar collaborator Sean Leon delivers a grand first-impression on “Tommy’s Intro.” A jazzy drum break serves as the backbone to free-flowing layering of bass, keys (provided by featured guest River Tiber) and horns as Leon spits “Gentrified but the block still mine/Got ’em blowing on mine while you dick ride/Get these chips and then I dip right/I don’t trip, I book a flight, take a trip.” By the track’s end, Junia-T clearly is in full control of where this ship is heading.

Benjamin A.D. becomes the star of blues tingled follow-up track “Thinking Over.” There are other great rap moments from “Try Me” featuring Nate Husser and STORRY to the J.O. Mairs guested “Home Team.” Junia-T at times steps into the MC role smoothly on a few tracks including Adam Bomb’s “Complicated.”

Studio Monk also has its fair share of R&B moments including “OooWee” featuring Elijah Dax which, sounds inspired by a cross between Hi-Tek and Dilla. Considering Jessie Reyez’s current position within mainstream pop, hearing her on “Sad Face Emojis” serves as an album highlight thanks to Junia-T’s jazz-house instrumental. Studio Monk also offers slowed-down 90s R&B vibes on tracks like “Dreams Come True” featuring SUPERDRAMAGO! and Faiza alongside the STORRY and Only1King “WYAT?” The chief production highlight and album closer “Puzzles” even transitions from R&B to full-on reggae.

Full of sonically dynamic production that’s always trying to impress with new tricks, Junia-T masterfully does great work with the cards in his deck. Meanwhile, each appearance feels meaningful and enhances the full vision for every track. Those looking to have a shining example of newer talent from Toronto should look no further.