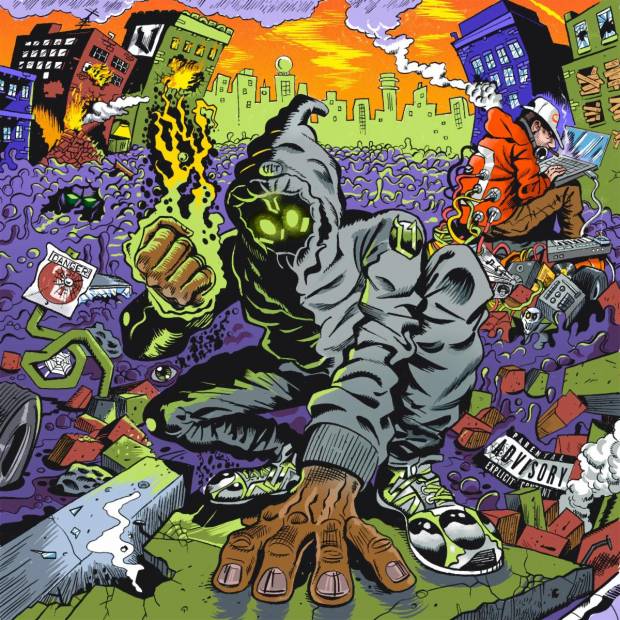 For a Hip Hop artist who has dropped a project every year since 2015, Denzel Curry’s work ethic isn’t too notable. However, his consistency, which is felt through his verses, is written and delivered like he’s demanding we pay attention.

UNLOCKED, his new project with Kenny Beats, is both the perfect solidification of existing fans’ devotion and thing to show to people who know of Curry but don’t know what all the fuss is about. If it takes longer to play than its 17-minute runtime, it’s only because you’re pausing it to tweet/DM your favorite lines. It was recorded in 24 hours and feels like it, not because of sloppiness, but urgency.

Curry has a voice and wit for battle rapping, and lines like “Untouchable to any window shopper, mannequin/Flow scorch the back just like it’s Anakin” could have you trying to summon a mic of your own, via the Force, in response. But good luck trying to compete with his utter brazenness. That line’s preceded by A Bug’s Life reference, and he’s still got the edge to make Star Wars and Pixar sound as hard as R-rated items. There are some hooks, and while there are many goodies (“After dark, the riot starts, way uglier than Bubba Sparxxx/Still tryin’ to raise the charts so I don’t have to push a shopping cart”), there’s a desire for him to just throw fresh verses out at every turn. Him pitch-shifting that chorus prevents it from getting too stale, though.

The comic-inspired artwork and pulpy intro will remind listeners of another pop culture-loving MC: DOOM. While Curry doesn’t quite match the masked rapper’s peak nimbleness in weaving together bars, he’s showing the kind of prowess that could someday put him in Daniel Dumile’s league of legendary. The release is also accompanied by an animated companion film, featuring the tracks and Curry and Kenny hunting inside the producer’s computer for leaked files, with tributes to claymation, Uzumaki, Scooby-Doo and more. which should appeal to fans of classic DOOM music videos like “One Beer” and “All Caps.” (Or, really, anyone who has even a drachm of taste.)

Wu-Tang fans, even those who’ve only heard 36 Chambers once, will catch Curry’s affinity for the Clan. When the title is dropped in the intro, it sounds a lot like the “En garde” from Ten Tigers of Kwangtung, forever immortalized by “Bring Da Ruckus.” Along with the Shaolin-worthy boasts, there’s a “Protect Ya Neck” reference, and some serious Ghostface Killah undertones on “So.Incredible.pkg.” If only he and Ol’ Dirty Bastard could’ve teamed up and made a remix called “Brooklyn ZUU.”

Kenny Beats’ production is a weapon as blunt and beautiful as Curry’s verses. Like with Rico Nasty on Anger Management, he’s the ideal match for rappers who say they’re the shit for what they can do on a track. When Kenny goes hard, so does Denzel Curry, constantly on the cusp of setting his larynx afire. He’s not just about the assault, like on the eerie “Lay_Up.m4a,” one of several tracks named with file extensions.

“Why I gotta go on tour to show I’m going through stages?” Curry asks in one of his dual displays of cleverness and thoughtfulness. If his answers are as powerful as his questions, he’ll be truly unstoppable.