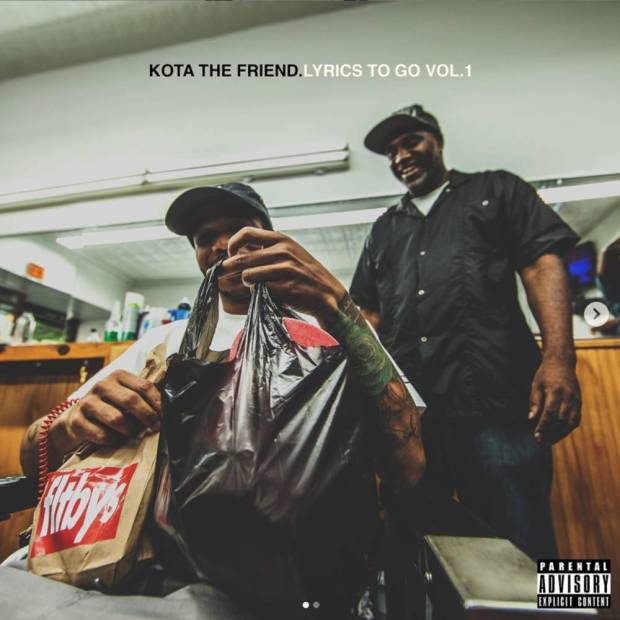 Kota The Friend has been doing his thing for years. Throughout his catalog, the rapper combines mellow beats with bars both introspective and insightful, joined with a deadpan delivery that meshes well with the mood. Dating back to 2016, his YouTube series “Lyrics to Go” has distilled his musical essence into short clips, complete with minimalist visuals and yellow subtitles that ensure you don’t miss a word. Now, Lyrics To Go Vol. 1 supplies fans with more of the same, packaged together for streaming services for the first time in his career.

At 10 tracks and 14 minutes, Lyrics To Go Vol. 1 feels more like a quick skim through Kota’s notebook than an album or even an EP. He sheds light on internal struggles and personal growth, while dedicating many words to his beloved son. Over languid production on “Retirement Plan,” he affirms his son’s future greatness while passing down wisdom, at one point making the graceful declaration, “I don’t come from money but my kids will.”

One-liners like these reaffirm Kota’s lyrical prowess. Still, Lyrics To Go Vol. 1 feels intentionally underdeveloped, and it suffers as a result. Each song is a lone verse without even an inkling of a chorus, and the instant he settles on an idea, he abandons it for greener pastures. On “She,” Kota goes to great lengths to describe the quiet, under-the-radar girl sitting in the cafe, but as soon as we expect the love story to take off, the song drops out after only 84 seconds. We find a similar result on “Folks,” as a touching tribute to old friends drifts off into silence without any concluding thought to tie it together.

Wandering keys and sparse percussion sets a fitting mood for the project, but it’s here that the 90-second song format is both a blessing and a curse. While well-constructed, the project’s production is entirely one-note, and the quick runtime is a necessity to keep the project within our ever-shrinking attention spans. Still, it creates a similar problem that we find with the lyrics — the simple loops fade in and out without any sort of musical progression.

Invigorating drums breathe new life into the tracklist on “Hero,” but the brief surge in energy is wasted without a chorus to follow his rousing verse. “Flu Game” gets off to a promising start with its soulful guitar licks, but resembles an unfinished demo without new chords to keep things interesting or bigger drums to solidify a foundation.

A gifted writer with a great ear for production, Kota The Friend has heaps of theoretical potential, but at the moment, he appears content to plug away on his slow-moving river toward prosperity. As he says on the intro track, “Can’t Please Everybody,” “If you don’t like it, don’t listen.”

In fairness, It’s a good lane to be in, even if it’s continuously limited Kota with narrow sonic range and minimal room for artistic growth. If you like one song, you’ll probably love them all.

Still, when his simplistic formula eventually gets old, there’s little in the arsenal to keep everything else from growing just as stale.