Review: Dave East Proves Only The Strong Are Fit For 'Survival' 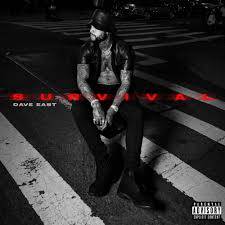 When Dave East first came onto the scene with the Black Rose mixtape, reviews about him were, simply put, mixed. It’s not that he couldn’t spit — to the contrary, he had a most impressive lyrical flow — but, rather, he didn’t seem to have an image that projected his ability to become a superstar. He was grimy, he was ordinary — he was, honestly, little more than an around-the-way guy, despite a co-sign from the legendary Nas.

With Survival, his actual studio debut, East proves that he’s learned a ton from the road paved by spotty mixtapes.

Over the course of 20 tracks, East lets the super-tight production guide him through the marathon (and, of course, there’s a tribute to the late Nipsey Hussle with “The Marathon Continues”) that is his album. The guest appearances are well-utilized and don’t dominate any of the tracks — East is equally yoked with everyone from OGs (like Nas and Rick Ross) to up-and-comers (Ash Leone). Hell, he even manages to make Jacquees sound good.

But East does best when he goes deep and introspective. Over a boom-bap sound that’s almost stereotypically Old New York, Dave East trades bars with the aforementioned Ash Leone on “Daddy Knows,” and demonstrates that his first priority is none other than his daughter, Kairi, whose voice is the first we hear on the track before East roars, “Ain’t nothing cooler than being your dad/I could be mad at the world, soon as I see you, I’m glad/For you, I go hard, can’t tell me, Dave, you need to relax/Daddy chasing a bag.” References to Nas abound in this track — both a hat-tip to “Daughters” and a slip of “The World Is Yours” let the listener know that his Mass Appeal capo is not far from his mind — but it, somehow, works.

The album does fall short in a few places, though — most notably on “What’s Goin’ On,” which features Fabolous. Sure, the lyrics slap — when he’s not on some bullshit, Fab is one of the best to come from New York City — but the beat is reminiscent of Don Johnson and Phillip Michael Thomas-era Miami Vice, with lo-fi production that crosses the line from artistic into hokey. And “On Sight,” which features Ty Dolla $ign, seemed specifically written with the intent to be “the single” from the album, and it just sounds like East is trying too hard.

Overall, however, Survival reveals the grind indeed pays off and with continued focus, East will continue to deliver more standout projects.