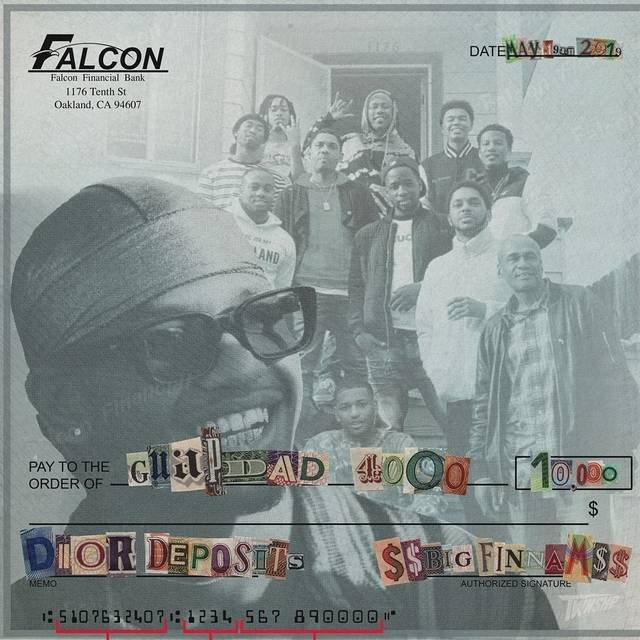 Even for a Hip Hop release, the number of luxury brands named on Guapdad 4000’s debut album is pretty high. The Oakland rapper offers tracks with names like “Gucci Pajamas,” “Rolex Rockstar,” and “Prada Process.” He also mentions riding in a Rolls Royce in his very first line and talks about “sleeping on Versace sheets.” Plus, the album is called Dior Deposits. However, Guap has thought beyond swag and some good mic skills. Although spotty, Dior Deposits has enough highlights to inspire optimism for future releases.

When reading some of these lyrics, you might wonder how anyone could write or recite them with a straight face. Not only does Guap provide lines like “I just want a new house with a pair of keys/Maybe get some animals, like some parakeets” and “She suck on my wiener/she tell me my nut taste cleaner” without so much as cracking a smile, he sounds like he’s trying to be either threatening or pensive. Lyrics such as these already don’t work, and his unemotive delivery doesn’t help. The most outwardly cheerful depiction we get of Guap is on the album art.

The tracklist for Dior Deposits is heavy with guests, with only a three-track run (including the spoken-word interlude “Jigga Juice’s Prayer”) giving us uninterrupted Guap. But it’s not that he’s a weak artist who relies on pals like Buddy (also of Zoink Gang) or Maxo Kream and Denzel Curry to salvage his tracks. One of the best tracks here, “Izayah,” has Guap, Kream, Curry, and Key! all coming through on pure adrenaline over minimal but well-matched production from James Delgado and Kenny Beats. Some of the weakest contributions come from some of the biggest names, with Chance the Rapper and G-Eazy striking out with verses that sound like they were written at the last minute and performed in one take.

Typically switching between a laid-back, talk-style flow and competent but impersonal singing, Guap never seems to be suffering from a lack of confidence. He might be better off just rapping and leaving the singing to guests like Tory Lanez, whose hook steals the show on “Stuck With It.” He doesn’t really lean into the “scammer” persona that garnered him initial notoriety all that much either. The track “Scammin,’” featuring Mozzy could be left off an it wouldn’t make any noticeable difference.

When Guap speaks from the heart, you should stand at attention. On “Can’t Stop Finessing,” his lack of expression is effective as he talks about memories of growing up around violence and losing friends. “Prada Process” is like a split-screen confessional for him and 6lack to speak their truths. In both verses, you can sense the drive in both of them. Guap also provides one of his most clever lines (“I left my left eye open, n****s creepin’ up/I got chilly, I was rappin’ in bars in Atlanta”)

Guapdad 4000 may not be Oakland’s new golden child, but his work ethic and moments of inspiration should keep him in-demand. Dior Deposits shows what he’s good at and not-so-good at. Here’s hoping he continues to lean in the right directions.