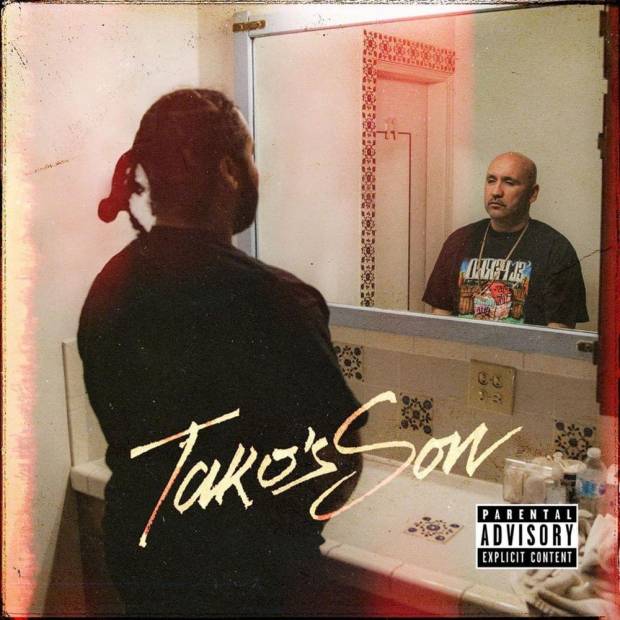 There’s a moment on Rucci’s new album Tako’s Son where he cedes the spotlight to AzChike, a fellow member of L.A.’s new wave with a laid-back presence and a distinctive, sneering delivery. Chike shreds the beat in typical fashion, flowing effortlessly over the sinister keys as he speaks of riding through the city and blowing money fast on the aptly titled “Function in the Hood.”

However, it’s when the beat cuts out from under him that he gives his most important proclamation: “How you in the Norf and you don’t even know Rucci?”

Whether you’ve been following his career since the MackkRucci days or his new EMPIRE debut is your introduction to Inglewood’s brightest talent, Tako’s Son will make you marvel at Rucci’s journey. The album contains some of the most focused work Rucci has delivered to date, finding him on a mission to make his mark with a clear purpose in mind.

Much of that purpose is centered around the stoic figure in the mirror on the album cover, Rucci’s own father who was deported to El Salvador years ago. Unsurprisingly, mentions of the man known as Big Tako are littered throughout the tracklist, as Rucci looks to uphold his legacy and carry on the family torch. On “Lowrider,” he reminisces of his dad’s ‘86 Cutlass and his own, long-abandoned hoopty, while a sample of War’s “Low Rider” weaves in and out of focus like Rucci’s new Maybach weaving through traffic.

Most of the album’s most incisive lyrics arrive in the second half of the tracklist, once he’s returned from partying in Tijuana on “La Bamba” and pauses to reflect on his current state. Rucci is adept at adjusting his voice to fit the situation, and his hoarse, cracking vocals on “Drop Out” add mournful textures to his words. The ensuing track “I Just Wanna Ball” sees Rucci at his breaking point, bemoaning his status as a high school dropout while he grapples with his uncle’s tremulous legal situation, rapping “I still ain’t paid him a visit / Can’t see my nigga behind the glass, not my nigga.”

He saves the most cutting verse for the outro, sending up a touching tribute to the late Sean Mackk on “Keep Going.” The song is Rucci’s gut reaction to Mackk’s sudden death two summers ago and finds him attempting to come to grips with the loss and process where he must go next. The lone verse is a beautiful build-up from start to finish, and once he finally hits the subtle melodies on the chorus, the emotion spills over in glorious form.

Leading up to the compelling culmination, however, the tape does begin to drag. “Fake Gon Hate” with 1TakeJay lacks the ferocious punch of the initial stretch of songs and doesn’t have the satisfying lyricism to keep the energy from dropping off. Kalan.Frfr is one of the city’s most promising crossover talents with a bright future ahead, but he struggles to fit over the awkward synths on “Nasty,” which aren’t warm enough to be soothing yet are too amelodic to settle into a groove.

The new L.A. is well represented on Tako’s Son — Shoreline Mafia, Lil Duece and more all make appearances — but the man of the hour always returns to take center stage. Tako’s Son feels like a celebration as well as a prelude, embracing Rucci’s top-tier status in Los Angeles while preparing for the work that must be done to stamp his persona on the national level.

In his career and his life, Rucci’s resilience has never come into question; now that he has more resources than ever, expect Tako’s Son to be the start of something special.