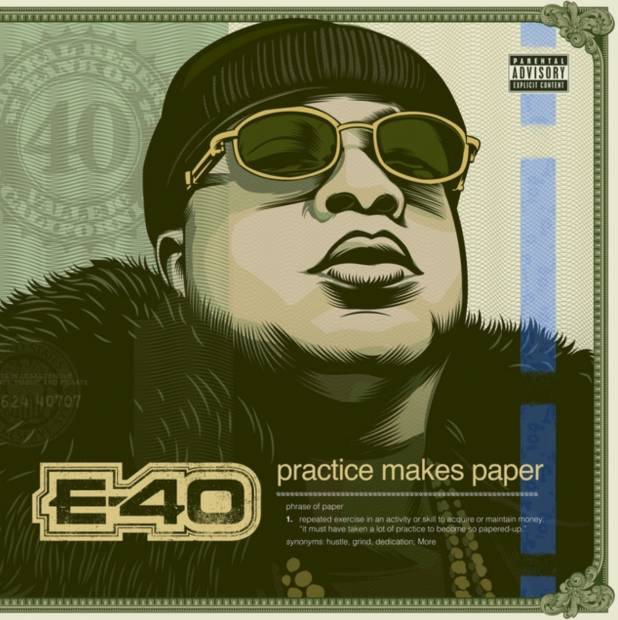 One name that didn’t appear on nearly enough Top 50 lists (as part of the recent craze) was Bay Area legend E-40. Longevity is one feat, but having 29 full-length solo albums is another — especially one that is relevant.

His latest, Practice Makes Paper, is laced with 26 tracks, making it a relatively long listen, though there is some definite payoff weaved into a tapestry of dope (albeit formulaic) singles floating in features.

At 50 years old (Black Don’t Crack!) hearing 40 Water act as almost conduit for both new and old acts while maintaining the spotlight as the star of the show is absolutely incredible. The singles, for example “Chase The Money” featuring Quavo, Roddy Ricch, ScHoolboy Q and A$AP Ferg, are so in tune with what’s currently working in the industry — and garnering success as a result.

What is the most amazing is that 40 doesn’t inherently change his style or delivery in any sort of attempt to fit in. Rather, he stays consistent to a sound he’s become synonymous with, inviting the bevy of guests to orient themselves accordingly (which they all do).

However, at 26 songs packed with features (albeit with a vibe that does offer a little sonic variation), the project is a little taxing as a top to bottom listen. The charm of this LP ultimately becomes the deep cuts that will likely become the ones that fly by night fans here for “Chase The Money” and “Made This Way” may gloss over.

“Facts Not Fiction” featuring Stresmatic is a surprisingly in-depth account of the numerous inventions that exist thanks to African Americans. “E-40 lyrics are like home school,” he spits at the beginning of the second verse. “Bet You Didn’t Know” is another shiny outlier on the tracklist, where he drops a bevy of seemingly unrelated pro life tips over a soulful sample. We’re talking everything from helping your children build credit, insect metamorphosis, to the low costs for basic life insurance.

Some of the songs, like “Goat” featuring Milla and “I’m It” do begin to feel a little lazy — and possibly a little too young at points — but those slip-ups are fleeting. Stand out collaborations with fellow legends Scarface (“Watch The Homies”) and Redman, Method Man and Bosko (“Keep On Gassin’”) and Anthony Hamilton and K-Ci (“My Everything”) is grown man music, even when it seems like it isn’t.

The way 40 manages to blend some songs that pander without pandering (which really difficult) and tracks packed with gems that illustrate the ins and outs of street life is an art. There is a clear attempt to both steer youngsters away from similar paths taken — and school those who rebel with a series of codes and potential consequences and pitfalls of a fast life.

And for that, 40’s music is worth revering once again.