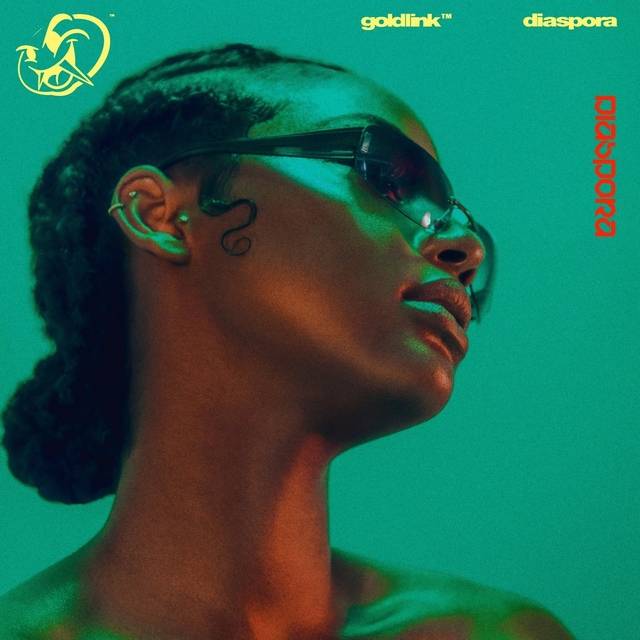 Anyone with a half decent summer playlist knows that GoldLink’s music is downright a must-add. The sheer groove of his voice and subsequent beats has the ability to physically summon listeners to a patio, park or neighborhood BBQ. Of course his smash single “Crew” (now 3x platinum) is known by most of the millennial world and can survive in any climate, but it’s his summery deep cuts that keep his projects as ripe as summertime sweet potatoes.

Diaspora, his official sophomore offering, takes those deep cuts to the next level and renders his best work to date; operating as a play in two acts.

The album’s top half is driven strictly by futuristic synth chords that anchor the first seven songs. It’s the first sound listeners hear on opening cut “Joke Ting” and the final pluck heard on coke rap/dance hybrid “Cokewhite” featuring Pusha T; rendering the tracks both fun and frightening. On the aforementioned “Joke Ting” and Lola Rae-assisted “More” the feelings are fresh as Gold raps pleasantly about women, weed and weather.

But the same synth that gets people up offa that thing, dancing ‘til they feel better is the same synth on “Cokewhite” – a track so menacing that it ultimately will make rappers want to tuck their whole summer in. And that’s word to P2J’s diverse production.

As soon as Gold and Push zip up said body bag, those synths are silenced and the album’s second driving sound drops in like catching a coconut to the dome.

Tropical riddims and steelpan grooves are put on blast starting with the album’s most streamable track “U Say” featuring Jay Prince and Tyler, The Creator. As much as “U Say” evokes piña colada pool parties, “Yard” is a real ode to di islands courtesy of the chopped not slopped “Murder She Wrote” sample.

To fully understand this back half’s noticeably pronounced sounds, look no further than the album title; the clue is in the name. A “Diaspora” is a dispersion of people and subsequent culture from their place of origin – which pretty well sums up Africa’s influence on the modern world. Goldlink executes and celebrates the musical reach of African and Caribbean culture with these authentic sounds and songs. Even the bridge on “Zulu Screams” is sung in Congolese language Lingala.

This heightened sense of rhythm and essence propels Goldlink’s songwriting abilities. He’s always had a knack for making dance/rap music but it’s his afro-rap and dancehall execution that deserves props here. His delivery isn’t forced, far from corny and seemingly effortless. Again, this should also be word to P2J’s spot-on production.

The only bucket holding this album back from being in the “best of the year” conversation is the actually rapping – not that it’s particularly bad but just too scarce. There are premeditated “rap” cuts in which Gold’s verses don’t stick out. “Rumble” bodes predictable lines like “pussy niggas wanna play like Juwana” that sound like their straight out of a How To Rap handbook. “Tiff Freestyle” however is a quick two minute snap off that bodes well for the DMV spitter but he is quite literally freestyling.

In short, GoldLink’s strength resides within his ability to bob and weave through intricate beats, not laying a 16 on a trap track.

What’s most noticeable about Diaspora is that it doesn’t have a song like “Crew” nor does it need one. That isn’t to say there aren’t potential hits amongst the 14 tracks but it’s really a 40-minute flow instead of a four-minute flex. Listeners will find themselves going back to the top of the tracklist and letting the album roll through the variety of worldly sounding tracks.