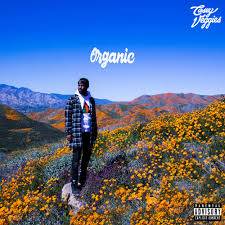 It’s been four years since Casey Veggies blessed the game with a new album. But, in that time, there have been so many releases — so many rappers that have come and gone — and so many purported Hip Hop ‘heads that have proven to be little more than stunt queens (and kings) that an artist like the Los Angeles native would have gotten lost in the shuffle had he chosen to drop a few joints. Veggies, for his part, has been loath to participate in the types of headline-grabbing stunts that his more extroverted contemporaries relish in.

And while his debut album, Live & Grow, showcased a man that was full of raw talent (albeit a talent that wasn’t fully developed), Organic showcases an artist that has grown comfortable in his own skin and his own talent.

One of the biggest challenges for Casey Veggies is to escape the “Odd Future” label that’s followed him since the inception of his career. And he seems to successfully navigate away from that label with such songs as “The Ceiling” and the spectacular “Mirage,” the latter of which has the best beat on the album and the strongest lyrical flow. Veggies shows he’s a force to be reckoned with when he spits, “Young niggas we created the sound/Y’all niggas recreated the sound/I’m tired of watching niggas faking it now/When I drop this time I ain’t taking shit down/I’m done waiting, yeah, my patience went down/This rap game tryna play with me now.”

Casey Veggies also invites a whole slew of rappers to spit 16 on various tracks, and unfortunately, the result is overwhelming. While veteran artists like The Game and E-40 are, as usual, brutal and in top form, Dom Kennedy’s more of an albatross hanging over Veggies in “Stop Playing,” which is also the weakest track on the album.

As, perhaps, can be expected, Mac Miller — and his unfortunate death — is a specter that’s been cast over the whole album. In addition to shouting him out on “Mirage,” he allows his late friend to deliver one final parting message to the world on the album’s outro, “Take It Slow,” in which the Pittsburgh native eerily predicts having “a long career, and um, just you know, being able to be influential in, in a positive way.” It’s a haunting and bittersweet reminder of what the world as a whole — and Casey Veggies, in particular, who said that Miller was “like a brother” to him — lost thanks to the horrors of addiction.

In an interview with MTV, Casey Veggies said that he made Organic “as an answer to everyone who doubted me.” While, certainly, his latest offering is leaps and bounds above his debut, he still has a way to go before he can honestly say that he’s grown up — and a fully developed artist.

That said, he’s growing, authentically and — dare we say — organically.