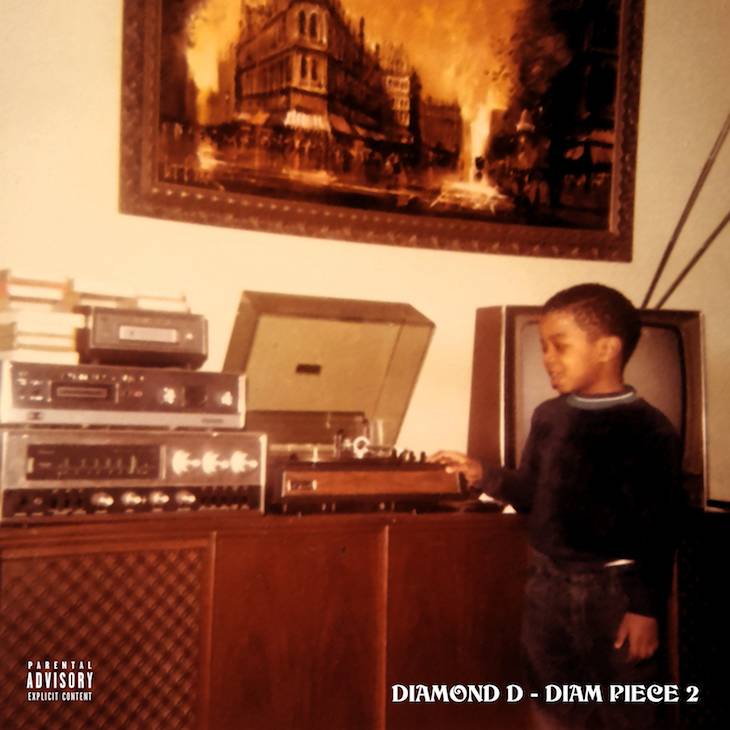 “I never wanted to be a local celebrity,” Diamond D declares at the outset of his latest album, The Diam Piece 2 (the sequel to 2014’s The Diam Piece). He goes on to declare his end game was not fame, but business. The statement sets the tone for a no-nonsense affair that features hard-bodied beats and solid rhymes, though is somewhat watered down by its overwhelming guest list.

D is not one for Snapchat or Instagram, as he makes plain on “Intro.” But, rather than sound like a grumpy old rapper, his focus on his craft in lieu of likes marks him an endearing throwback. “Uh, the dip between fiction and fact/All you see is blurred lines when the conviction is crack,” he laments. And yet, whether he’s turning it up with Snoop Dogg or warning foes to watch their backs with Buckshot, Rockness and Steele, D’s own conviction remains as solid as ever. The result is an album that seldom falls into the territory of out-of-touch backpacking. An outlier to this is the worn Scarface sample on “The Hit,” though more often than not D’s Rotten Apple bars are more entertaining than yawn-inducing.

There are more than 30 guests on The Diam Piece 2, so it’s impressive that D stands out amongst all the lyrical legends (Raekwon, Talib Kweli, and Pharaohe Monch amongst them). Still, it’s frustrating that D shares the spotlight on nearly every single track. With such a forceful presence, it would have benefitted the album to hear D have room to maneuver. He’s able to do so on “Chivas Blanc.” It’s no coincidence that the cut is one of the album’s best tracks, as D provides hair-raising quips like “He’s cold and callous like Rae Carruth” over a regal piano loop. That’s not to say the guests aren’t welcome. Havoc and Erick Sermon kick steel-toed bars on “Three Kings,” while Twista speeds by on the closing “Hold Up.” It’s a joy to hear D pitting the younger and gifted A-F-R-O with the Chi-town legend.

As consistent as D’s flow is the production. It’s subdued in an appropriately NY manner. The downbeat “Bodied” creates for a rainy-day vibe as he, David Banner, Big Rec and Edson Sean rip the cut to shreds. “I Can’t Lose” features beautiful keys and an inspiring bassline that sets the tone for Elzhi and Blake Moses to reach for the stars. Most of the songs follow suit in matching D’s signature tempered-yet-assertive approach with mid-tempo production. “Next To You,” an obligatory one for the ladies, is poorly suited for an album embedded with NYC’s DNA, but does little to bog down the overall consistency of the record.

Consistency is the key word here. Diamond D won’t garner many new fans with this traditional album, and will predictably delight purists. Everyone in between can appreciate this album as another worthy entry from one of Hip Hop’s most underrated MCs.