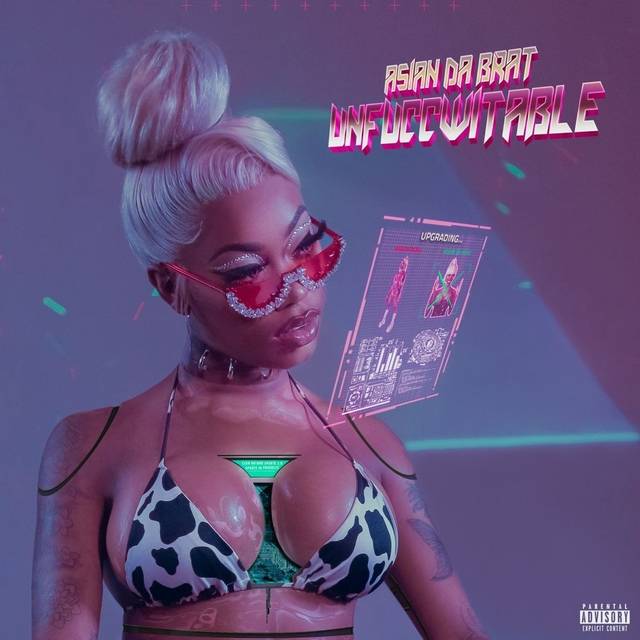 A couple of weeks ago, Asian Doll announced that she changed her stage name to Asian Da Brat to distinguish herself from the countless other “Doll” rappers while also paying homage to the first platinum female MC Da Brat.

As Gucci Mane’s 1017 Eskimo Records’ first female MC, the new Brat has already accomplished a lot in her short career through releasing numerous mixtapes, building up a devoted fanbase, and cooking up an impressive roster of collaborations. Though her recent name-switch could be easily dismissed as a stunt, her new mixtape UNFUCWITTABLE, a follow-up to last year’s solid So Icy Princess, once again proves that she possesses some serious talent.

Despite the name change, the vibe is largely the same. Brat creates music centered around her fierce persona and at its core, UNFUCWITTABLE is a collection of bangers. The mixtape kicks off with “Proud of Me,” a mid-tempo track with Asian-inspired beat and smooth, Auto-Tune melodies. Smooky Margielaa, a 16-year-old up and coming artist, delivers a solid verse that manages to make Auto-Tune sound fresh and interesting.

While “Proud of Me” is sonically distinct, the majority of the tracks are largely the same. That’s not to say they don’t make for fun, enjoyable bangers. On “Eskimo Flow,” over a minimal, bass-beat, Brat exudes a cold, enthralling nonchalance. She raps cocky bars with ease: “Fresh as fuck, I’m by myself, my gang can’t leave the state/ I eat beats, he eat my pussy like some Frito-Lay/ Courtney called me, asked to send a bird, A-okay.”

The Dallas rapper perfects her chilly style on the standout tracks “Tweakin,” “Double Burger,” and “SHHH.” Though Brat has plenty of charisma, she’s often assisted by collaborators who thrive in her company. “I Love It” has Stunna 4 Vegas matching Brat’s ruthlessness, spitting disses and boasts. And on “Draco”, Smokepurpp delivers a memorable performance that’s packed with humor and clever, irreverent references. He starts his verse off by interpolating a Plain White T’s song: “Yuh, hey there Delilah, bitch I’m tryna fuck/ uh Bitch I’m throwin’ bucks, if they test me I’m gon’ bust.”

Overall, the mixtape sustains a high level of quality. However, there are few instances in which Brat’s shortcomings are exposed. When she tries too hard to be melodic and experiments with sing-rapping, her amusing personality doesn’t come through. The slow-paced “Grandson” is pretty generic and uninspired, neutralizing any momentum with it’s labored chorus. Similarly, “Traumatized Remix,” featuring Lil Durk, and mixtape closer “Did For The Streets Lifestyle,” lack any cohesive structure.

Even though UNFUCWITTABLE loses traction towards the end, there are plenty of perfect, turn-up tracks that are ready for the club. Hopefully, Asian Da Brat continues to excel in this new chapter of her career.