Review: Beyonce's "Homecoming" Is A Force Of Nature 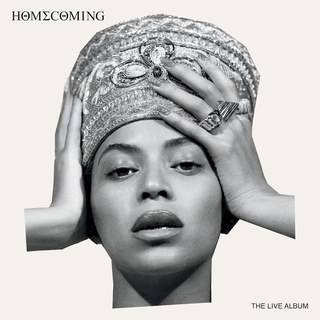 Like her marriage-solidifying joint album with hubby JAY-Z, it’s tempting, on the surface, to just give Beyonce’s Homecoming album a perfect 5 rating.

If solely to avoid the wrath of the omnipresent “Beyhive,” a faction of the fandom known to invade social media spaces like a pack of Vandals and leave lemon and bee emojis on unsuspecting Instagram photos.

That, however, would sell the album extremely short: not only is Homecoming an artistically-sound triumph, it’s a cultural touchstone and, quite possibly, the live album of a generation.

As we all know, “Beychella” was the driving force behind Homecoming and its accompanying Netflix documentary of the same name. And the album is nothing if not hefty: forty songs long featuring the best-known tracks of Beyonce’s oeuvre, delightfully remixed and mastered for the expectant live audience inside California’s most coveted desert.

But don’t mistake Beyonce’s performance for a cheesy Vegas-style retrospective. This is Beyonce in peak form — physically, spiritually, psychically, and performance-wise. She has previously shown her ability to rap (see the Summer ’18-winning “Apeshit”), to get soulful (Dreamgirls soundtrack), and even to get down-and-dirty (Lemonade).

On Homecoming, though, she brings it all together in one supersonic performance.

The standard Beyonce fare can be found here — “Crazy In Love,” “Bow Down,” “Drunk In Love” — but that’s not, really, what makes the album the classic that it is. It’s nice, don’t misunderstand — but if Beyonce had just released a live album of her greatest hits, it wouldn’t be perfect in any way. Rather, it would just be a “live performance album” that would join the infinite number of live albums that have come before and will come since it dropped.

What makes Homecoming — both the album and the live performance — so classic is that Beyonce makes clear, now and forever, that she is unapologetically, and beautifully, Black. She is Black in her essence — Black Excellence, personified — and in her performance, she makes the audience believe that they, too, are Black Excellence personified.

The living legend doesn’t achieve this by standing onstage and bleating quasi-feminist platitudes. That would be boring, and Beyonce — First of Her Name, Mother of Dragons, and Queen of All Things That Slay — does not do boring.

Rather, Beyonce achieves this by bobbing and weaving through nearly 150 years of African-American art, poetry, and activism, and turning it into the musical performance of a lifetime. In between covers of such classics as “Lift Every Voice and Sing” and “You Don’t Love Me (No No No),” Beyonce tips her metaphorical hat to the likes of Clark Sisters, Big Freedia, Nina Simone, Fela Kuti, and James Weldon Johnson.

She even gets daring in places, giving a cyberpunk twist to “Formation” and duetting with her baby sister Solange on a lilting “Get Me Bodied.”

There’s only one minor — indeed, very minor — issue with Homecoming, as an album: unlike the similarly galvanizing Frampton Comes Alive — which stood alone as a live album, and was, in fact, one of the defining moments of Peter Frampton’s now-largely-forgotten career — it’s difficult to see it as a stand-alone album without the context of the accompanying Netflix film.

The good news is, it doesn’t need to.

Beyonce’s place in history has already long been cemented. And while much ado has been made about her, almost to the point of parody, Homecoming is one of those times where there’s no question as to why that’s so.

It’s Beyonce’s world, bitches — we just live in it. Bow down.