Review: Mass Appeal's Starting 5 Aren't Quite A Unified Movement ... Yet 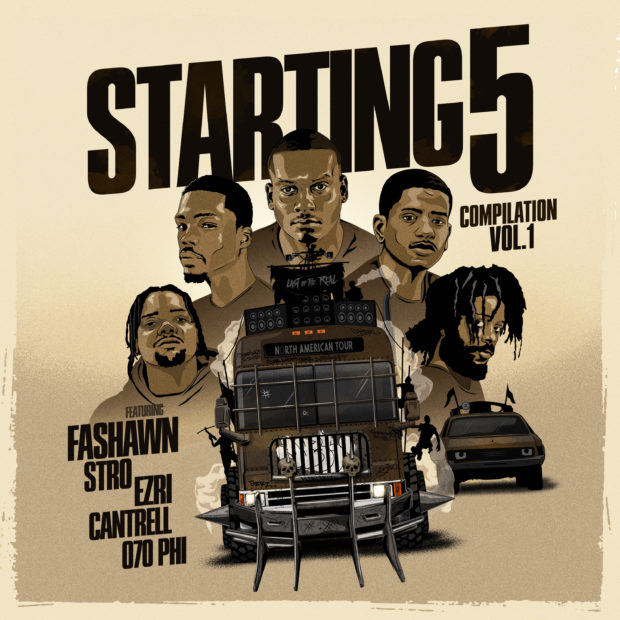 There’s no denying Nas’ Mass Appeal has a talented roster. So, when it was announced that the likes of Fashawn, Stro, Ezri, Cantrell and 070 Phi would collaborate on Starting 5, Vol. 1, heads turned their, well, heads in attentiveness.

While the compilation contains stellar lyricism, it’s night-and-day production and still developing chemistry that keep it from being undeniable.

The project starts with the triumphant “Apostles,” by Fashawn, Nas and Ezri. The rookie holds his own with the Grizzly City vet and QB legend, while Fash comes out swinging with his brass-knuckled delivery. “Veteran swag, all I’m inhalin’ is gas,” Fashawn quips, while Nas drops jewels like “A king is often alone, even in a crowded home.” The standout bars seemingly set the stage for an extravaganza of excellence, and lead into the lyrically crack “I Had Enough” by 070 Phi and Stro. Had the project continued the vibe of the first two cuts, it would have been a formidable foray into the purist ethic.

Alas, like late-’90s Nas, mainstream pressures and lackluster beats put a damper on Starting Five, Vol. 1. “6 Rings” by Cantrell, Ezri and 070 Phi is clearly a stab at trap glory, but the repetitive further drags down an already basic beat. Ezri’s contemplations on “Black & Blue” are impressive, but are diminished by another underwhelming beat. And Fashawn matches the slog of a bassline on “Utter Disrespect” with a painfully monotonous flow. At eight tracks deep, the project has little room for error, and these three songs smack dab in the middle stick out like a sore thumb and seriously mar an otherwise solid project.

“When Morning Comes” elevates things slightly, mostly thanks to Liana Bank$’ smooth hook. Yet, it’s “Sonshine” that showcases this roster’s true potential when they’re focused on the right things. Thick drums and jazzy horns make for a soaring backdrop as Stro, in particular, shines with rhymes like “I stay patient, and my whole family Jamaican/Now we looking for papers like we immigration.” The album would have been well-suited to end with such a strong cut, but “Run It Up,” with its rainy day piano keys and smooth verses courtesy of Fashawn and Stro, makes for a worthy encore.

Had the entire album been more like its bread than the meat of the sandwich, it would have been one of the stronger projects of early 2019. Yet, the mid-album lag makes Starting Five, Vol. 1 an inconsistent affair that all its composers can build off on.