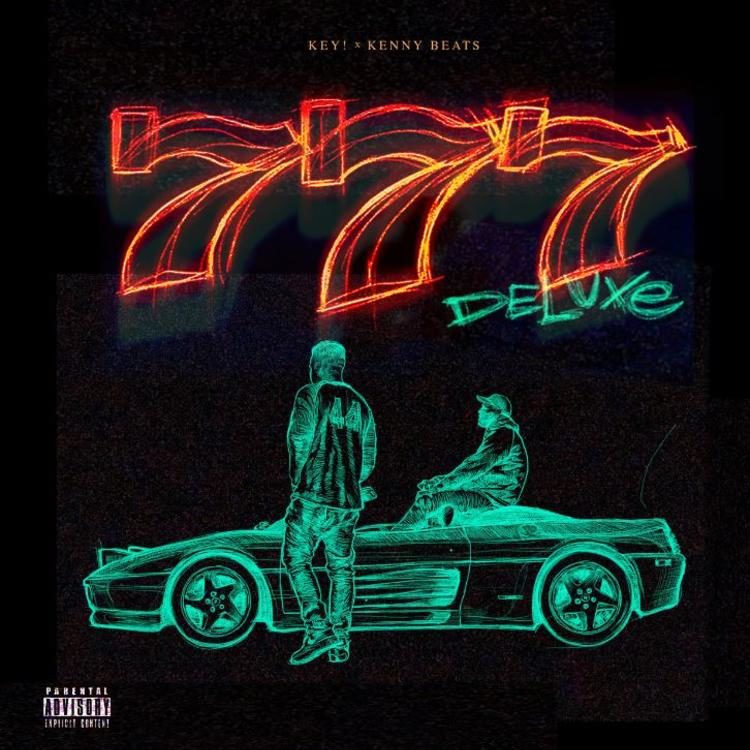 Earlier this year, Atlanta rapper Key! and producer Kenny Beats delivered 777 – a solid collaborative project that highlighted both artists’ strengths. Their new EP 777 Deluxe serves as a follow-up to that success and invites an eclectic range of artists to flex their distinct styles. With its top-notch production and exciting guest performances, 777 Deluxe suggests that Key! and Kenny Beats have a promising future as collaborators.

Kenny Beats is a well-rounded musician, having a second career as part of the EDM duo Loudpvck. Across 777 Deluxe, his penchant for dexterity shows. The EP commences with “Remember Me,” a banger featuring Rico Nasty that showcases an organic, enthralling chemistry between the three distinct artists. Rico Nasty has spent 2018 establishing herself as one of Hip Hop’s most vibrant personalities. In a similar vein to her album Nasty, she makes sure to leave a lasting impression on this project. Over Kenny Beats’s hard-hitting beat, she delivers her verse with an unapologetic playfulness: “Look mama, I’m on TV / Chains on my neck with the gold teeth/ Everybody wanna say they knew me I bet your boyfriend probably wanna screw me.”

777’s standout track was “Hater.” This time around, the duo upgrades the hit by inviting English grime rapper Skepta. The British artist matches Key!’s menacing flow while adding his own signature bravado. Similarly to “Remember Me” and “Hater,” both “Cable Guy” and “Love On Ice” demonstrates the duo excelling at collaboration. Featuring up-and-coming SoundCloud rapper Jay Critch, “Cable Guy” has one of the EP’s catchier hooks and has both rappers bouncing off one another’s energy. On the other hand, “Love On Ice” features 6LACK lending his looser lyricism to the upbeat track. This remixed version of one of 777’s standouts is enhanced by 6LACK’s nonchalance. He emulates a drunken stream-of-consciousness with the effortless, humorous line, “You look like Beyoncé, maybe I had too much to drink.” His voice floats above Kenny Beats’ atmospheric trap beat, giving the track an alluring spacial texture.

Though the two artists do a fantastic job at collaborating with others, “Nothin” lacks the same flair and confidence. Kenny Beats’s production aims for upbeat, dancehall vibes but falls short of being the pop hit it wants to be. Despite capping out at less than two minutes and thirty seconds, the track lags with Key! failing to muster out a hook that sticks. Perhaps a more pop-oriented artist could have stepped in on the chorus to do the heavy lifting.

777 Deluxe’s success is a testament to the duo’s ability to bring out the best from their guests. Despite not always succeeding, there’s something undoubtedly exciting about a duo that enthusiastically creates space for an eclectic roster of artists.