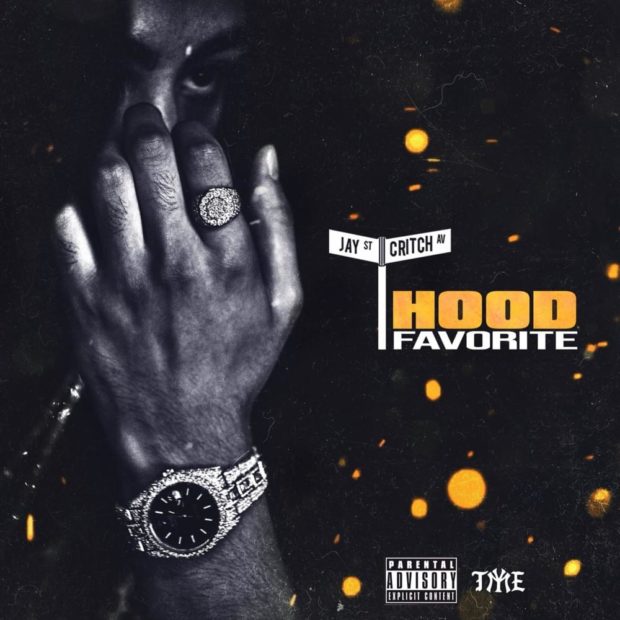 For those intrinsically plugged into the class of new school rappers (the face-tat aficionados that are barely old enough to purchase alcohol) Brooklyn rapper Jay Critch’s debut project has been as highly anticipated as it’s been a long time coming. Since inking a deal with Rich the Kid’s Rich Forever Music imprint two years ago, Jay has been heating up via a string of hot featured verses and scorching loosies but sample clearance issues and resulting pushbacks prove once again to be Hip Hop’s resident fire extinguisher.

Hood Favorite is exciting to finally have a concrete, full-length project from Critch but disappointing that it took so long given his momentum earlier in the year. Nevertheless, the 12-song project delivers on its promise to be quote-unquote Hood Favorite thanks simply to banging beats and even better rap writing.

Off top, there is nothing revolutionary about Jay Critch’s approach to making music as a whole (this project included) but he does, in fact, stand out when put up against the majority of his generational contemporaries. Jay can rap. Like, rap rap. He opts for metaphors, similes, punchlines and double entendres rather than harmonizing melodies atop a beat with the help of Auto-Tune. He doesn’t waste any time showing and proving his bars as lines like “He be poppin’ shit, smoke a nigga like a dutch/But I be smokin’ pounds of gelato out the Backwoods/That nigga ain’t really from the streets, he just act hood/My niggas gon’ run off on the plug if the pack good/If I’m on the block then I’m ballin’ just like Shaq would” appear only minutes from pressing play on “Smutty (Intro).”

After the wobbly “Way It Is” wraps up, the echoing gospel hums of “Ego” usher in Jay’s best song to date. Produced perfectly by Jamz, who creates a beat that can best be described as a ghostly ghetto gospel, Jay manages to mix his braggadocious boasting with some more relatable lines. “I pulled up in a Louis fit, real smutty/I remember back then, she was frontin’ on a kid/Now the bitch tryin’ to give me cudi/They be hatin’ on a kid ’cause I’m gettin’ backends/But that’s just how it is, shit funny” is rightfully egotistical, moderately vulnerable and equally as clever – “hatin’ on a kid/give me cudi.” Kid Cudi. Get it?

Despite “Ego” being Hood Favorite’s most potent cut on the project, “Try It” is unwaveringly the anchoring hit. Fellow Yankee rappers French Montana and Fabolous bless the track with their respective add-ons. Aside from this song and “Quicker” with Offset, Jay handles all the vocals himself – which is impressive given today’s trend of DJ Khaled-ifying every song and subsequent album.

The back six songs on the album lob pleasantly trap-tastic beats from the likes of Laron, Chulo and Stats for Jay to slam-dunk but instead of shattering the backboard, he just lays them up. It isn’t his flow, pocket presence or even his general rap ability that brick on these tracks, it’s his subject matter that comes up short. Tons of crafty bag talk and steal your girl raps don’t align with the height of Jay’s skills.

At 21-years-old and to just have made a run in rap he shouldn’t necessarily be required to deliver the most sophisticated rap album ever created but some variety would have been nice so that Hood Favorite could live outside club crusades and car rides.