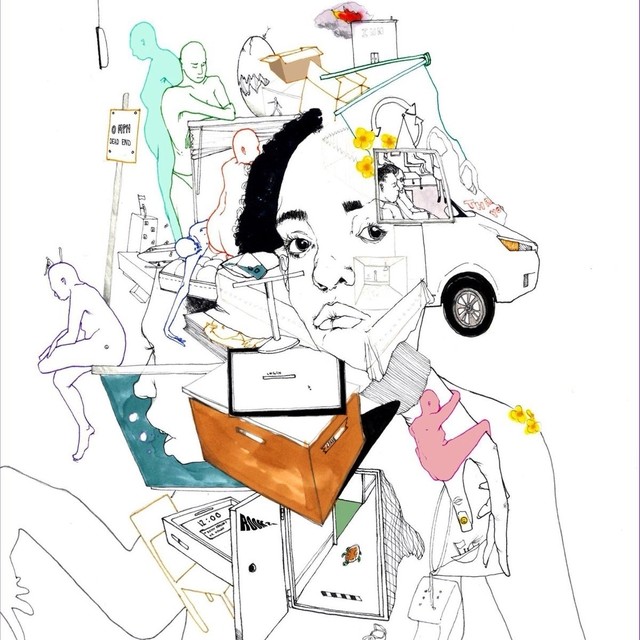 “Scramble Think” is what she once called it during her NPR Tiny Desk performance last year.

Her follow-up trick, the sensual Room 25, finely tunes the best assets in Noname’s artistic toolset while digging further into her own head; anticipating where the rabbit hole journey goes becomes part of the enjoyment. Coming in at a little over half-an-hour long, the Chicago native manages to do all that while showcasing her abilities as Hip Hop’s rising MC. Room 25 opener “Self” has already created one of the most non-beef related quotables this year as she spits: “My pussy teachin’ 9th grade English / My pussy wrote a thesis on colonialism / In conversation with a marginal system in love with Jesus.”

And all the while, Noname taunts listeners impressions by asking “And y’all still thought a bitch couldn’t rap huh?”

Subsequent track “Blaxploitation” purposely samples the best quotes from classics including The Spook Who Sat by the Door and Dolomite. The instrumentally allows Noname to weave between thoughts of her own hypocrisy for eating Chick-Fil-A or questioning Hillary Clinton’s Hollywood level pandering to minorities.

"Nah she dope, she like the female J Cole"

Room 25’s most musically lush and dynamic moment comes in the form of “Window” featuring long-time collaborator Phoelix. An expensive (for indie standards) full string orchestra wraps around some slow funk production allows Noname to display conflicting post-relationship emotions that couldn’t be any more heartfelt. The anger in wasted energy as she spits, “This sacrifice for my wholesome / I’m bought the church for the steeple /I bought you Game 5 tickets, made my pussy the sequel” before asking “So you really don’t think about me?” and “You really don’t miss me?” Sincere moments like this remain on tracks questioning mortality like “Don’t Forget About Me” or the hopeful “Regal.”

“Montego Bae” becomes Room 25’s most carefree moment Ravyn Lenae delivers a swingy hook for Noname to spit about falling in love at Jamaica’s biggest tourist town between making references to swimming Scrooge McDuck style in money, getting her back-blown like Oprah in expensive hotel rooms, reading Toni Morrison and coaster usage because “a bitch really ’bout her freedom.”

The closing track “no name” serves two purposes that are essentially intertwined; explaining her rap alias origins and how that makes her ultra relatable. It’s a message at the heart of Room 25.

Noname overwhelmingly succeeds in telling her coming-of-age story where she removes all emotional layers to explore everything from comical socio-political ideology to sexuality minus self-serving preachiness.