Review: $uicideboy$ Rap With Hellish Fire On "I Want To Die In New Orleans" 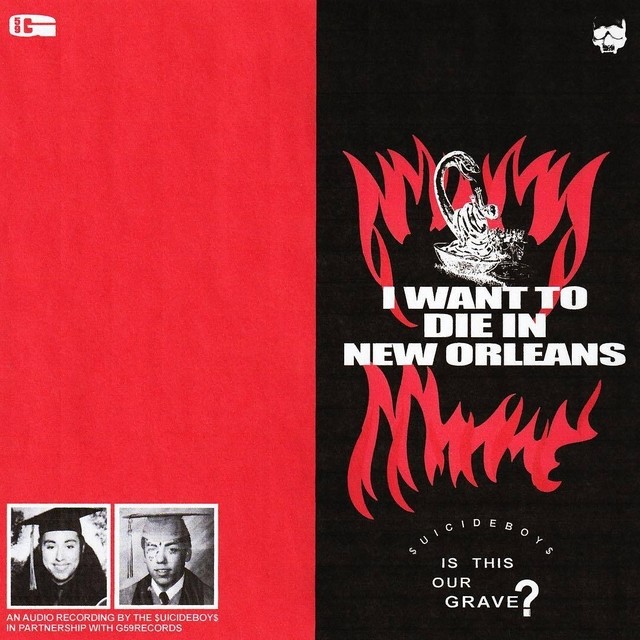 Two years ago, the $uicideboy$ didn’t want to die in New Orleans. Honestly, how could they? After seeing a sharp, recent upswing in their career trajectory, the duo was traveling the world living lives of luxury, with no intentions of returning home to wind out their final days in the same place they started. But eventually the wake up call came, alongside awareness that none of the splendor would bring them true happiness; thus spawning the new title of their latest album, I Want To Die In New Orleans.

Considering the name of the band as well as the name of the album, death is unsurprisingly a major theme throughout the project. They paint a tormented picture, looking at the end of life from all sides— the death of their idols, the death of their haters, the death of themselves. On the standout track “Nicotine Patches,” it’s a sobering, yet sincere examination of the first category: “All of my heroes are rotting in their fucking graves / One day, I will forget their name… One day, I’ll become the same” sings Ruby da Cherry. Lyrics on “Long Gone (Save Me From This Hell)” are just as cutting, as Ruby raps “Raise a glass to a room full of all my dead friend’s ghosts, they loudly shouting, pounding fists / Yelling ‘yo, is this a joke? You vowed to quit— renounce the shit!’”

Such dark revelations are a constant throughout I Want To Die In New Orleans, with the storyline revolving around lonely themes of demons and depression. Still, there’s a flippant, tenacious energy in the production, signaling that the duo are resigned to their state of mind and determined to rage their way out of it. As Juicy J serves as the project’s executive producer, there’s an unmistakable Three 6 Mafia influence on nearly every song, but they’ve tweaked the soundscape with their own punkish intensity. “Bring Out Your Dead” closes with distorted, frenetic screaming; “FUCK the Industry” showcases Ruby’s rebellious, rockstar delivery. Still, “WAR TIME ALL THE TIME” might be the most antagonistic on the tracklist, with $crim setting a threatening tone early on before Ruby goes full screamo in the second verse.

Nothing about I Want To Die In New Orleans is smooth, except for the seamless way the tracklist flows from song to song. Occasional news clips and interludes link everything together, allowing for breaks in the midst of the onslaught without departing from the overall mentality of the album. At the end of the first song “King Tulip,” a broadcaster interrupts their disenchanted rant to deliver a report on a shooting in New Orleans, with two people having been taken into custody for firing at police officers.

However, Max Beck’s monologue at the start of the song is perhaps even more polarizing, as he asks in bewilderment through a cracking voice: “How did these two muthafuckers from New Orleans — how did they change music?”

To their credit, it’s impossible not to see the influence they’ve had over the world of SoundCloud rap since they first got started in 2014. They’ve released over 40 projects in the time since, and despite the year long drought leading up to I Want To Die In New Orleans, there’s no denying their work ethic either. But have they actually changed the world of music itself? It’s possible to chalk it up top typical artist bravado, but after yet another well-received release, they certainly have the evidence to argue their case.