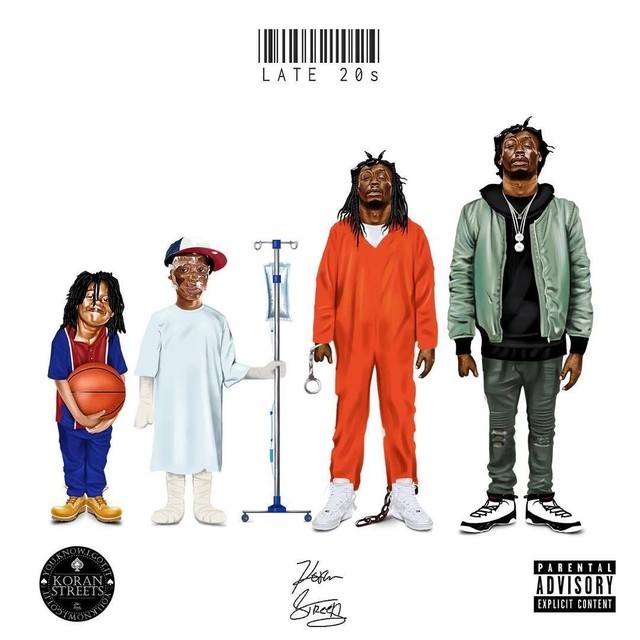 It’s been nearly two years since Berkeley’s own Koran Streets dropped off his career-elevating project, You.Know.I.Got.It (The Album). After much anticipation, the West Coast MC makes a triumphant return with his latest LP Late 20’s, a 15-track effort where Streets gives listeners a vivid recollection of his hardened life and how it molded him into the rapper spitting before you. Streets holds it down solo but the album’s somber tone keeps the highlights to a minimum.

Koran Streets’ skillset as an artist lies greatly in his ability to effectively articulate very specific parts of his life experiences through his raps, and this is complemented by his raw, unfiltered delivery.Late 20’s chronicles a man coping with a great deal of pain from past experiences in the streets, and rap is used as a means of therapy. He shines most when he’s at his most vulnerable. This vulnerability is best heard on tracks like “Corner Store” where he intensely details the difficulties of progressing in the rap game and hoping to not have to rely on drug dealing, and “Movin Slow,” where he touches on the frustrations of his grind not paying off as fast as he’d thought. The latter gets especially vivid with lyrics like, “I made a promise to my momma I would get the house back when I was 9, I’m 28 now/ dope case pending, bail 8 thou, still keep a smile through my life wild.”

The production found on Late 20’s has a noticeable Bay Area bounce mixed with crackhouse mentality urgency with a dark twist. This style is exemplified at its strongest on “Sincerely Yours,” an instrumental that sets the stage for Streets to vent in a diary-like fashion. Although his blow-by-blow style of writing is indeed unique, there are scattered stretches where you can get lost in his stories. And the moments come when he steps outside of his base content for more light-hearted, fun records like “Return of The Mack” (with its lousy 702 sample) and “Rock The Party,” come off as trite and unimaginative. In an era where albums range from seven to 25 tracks, it seems needless to critique a 15-song release. However, there are a few records (such as “Fallin & Ballin”) that should have been cut to make for a more succinct listen.

Late 20’s makes benchmark in Streets’ career progression but still isn’t up-to-par with the more visible insightful MCs in his lane. That said, Koran Streets has an interesting and compelling story with a bright future ahead if he can build upon the strong points.