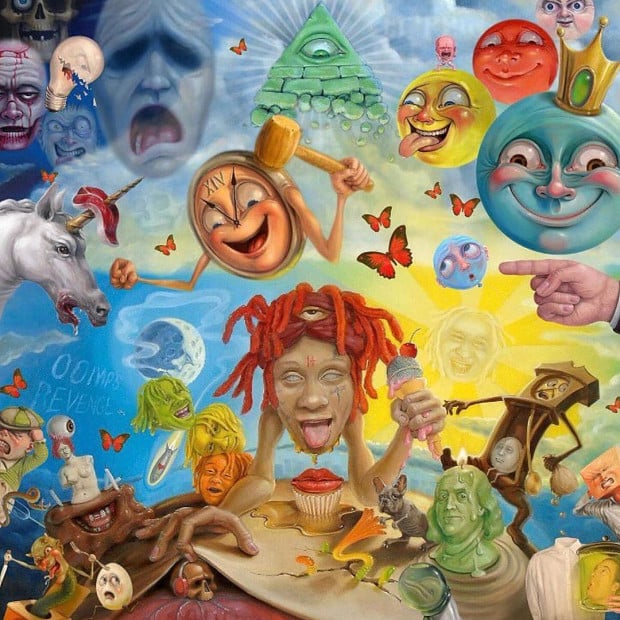 Since 2016, Trippie Redd has been a name-to-know in the colorful-dread, face-tat, SoundCloud underworld, thanks to his relentless release of EPs and mixtapes. Meticulously dropping a grand total of eight projects in two years cultivated the Ohio native a hoard of Cool Teen™ fans who have been zealously waiting for his first official LP to rock their world. To make matters even more feverish, “Dark Knight Dummo,” his Travis Scott-featured, Life’s a Trip leadoff single which was released in December 2017, has had the streets and tweets ablaze for seven months straight.

Which perfectly paved the way for the 14-track “official” debut to firmly removes him from the category of SoundCloud rappers that lack the discipline to ever drop a full-length album. In fact, on paper, his rollout for this album was more traditional than the rest of today’s internet rollout norms (he had a banging lead single, album art reveal, and (almost) unwavering release date).

The opening track “Together” unfurls with a somber harmony of guitars and sentimental croons more akin to a My Chemical Romance reference track than the intro to a popular rapper’s project. But that’s no mistake or lapse of judgment on Trippie’s part. His young artistry shines through as he paints life pictures across all genres – not just with hi-hats and thundering 808s.

“Taking a Walk” ushers in some more up-tempo production courtesy of the legendary Scott Storch but Trippie is still firmly in his bag on feelings. “These people don’t want me alive, no/They wanna play games with my life” are chanted at punk rock levels with a wobbly Auto-Tune filter thrown over the top. As if these first two cuts weren’t pop punk enough, “Wish – Trippie Mix” is the holy grail of emotional pop-punk-scream-rap. He drives home a rap/rock vibe that has become wildly popular amongst newcomers but Trippie is hardly following a trend, the sentiments of sorrow are genuinely felt.

The songwriting itself isn’t too shabby and the faltering vocals double down on Trippie’s candidness but listeners need to be almost exclusively in an angsty teen state of mind to enjoy thoroughly. Whereas some of his other millennial rap cohorts sprinkle in the sad boy aesthetic, Trippie goes all out; rendering the replay value of these tracks. The same headspace is required to both enjoy and revisit “How You Feel” and “Underwater FlyZone.”

However, the album isn’t just stuck between the pages of his emo teen diary — it also busts out of the confines of Trippie’s composite rhyme-book. He gets some seriously coherent bars off on “Missing My Idols” and “Oomps Revenge”; the former devoted to his musical idols and the latter dedicated to his deceased brother. These tracks could very well be classified as contemporary boom-bap with Trippie getting off some slick lines like “Might just have to drop a bomb, Han Solo/Got me bicken back being bool, Quasimoto.” Trap-tastic bangers fill in the remaining handful of songs with “Shake It Up” likely being the next Trippie track to be thrown into DJ rotations. Nevertheless, when it comes to proverbial bangers, “Dark Knight Dummo” — produced immaculately by Honorable C.N.O.T.E — takes the entire bakery.

Trippie’s experimentations and genre-blending on Life’s a Trip has to be appreciated (seeing as it eventually will breed a better-rounded artist). As good as Trippie’s trap prowess is, an album packed with several watered down versions of “Dark Knight Dummo” would get old quick. His emphasis on punk-rock also may deter those looking for 14 Rap Caviar-ready cuts. But his core fan base will be pleased with his decision to trip on his own terms.