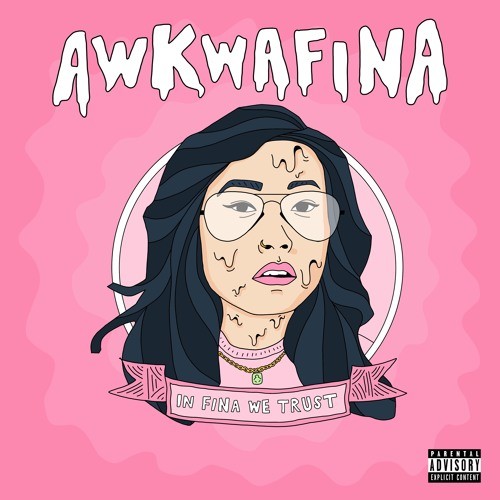 Anyone seeking out a millennial artist who accurately reflects today’s climate need not look any further past Awkwafina.

She has her finger in many pies — acting, comedy, and Hip Hop — in hopes of having one catapult her into mainstream success. With a role in this summer’s all-female remake of Ocean’s 8, she’s surely on the cusp of Hollywood fame. But on her new lively EP In Fina We Trust, the follow up to her 2014 album Yellow Ranger, she proves weaving her comedic and musical talents into one package has become a forte. Though her earlier work could be dismissed as a spoof, In Fina We Trust shows her successfully building off her quirky style.

Throughout In Fina We Trust, Awkwafina addresses a range of social issues with a satirical bite. Starting off with “The Fish Intro,” she delves right into the racism she experiences in Hollywood with a funny skit about her interacting with a fan who keeps on mistaking her for other famous Asian American people. Despite being often self-deprecating, she raps with ease. On “Cakewalk,” Awkwafina delivers cocky lines over a catchy beat comprised of church choir singing, organs, and drum claps. Her assertive flow makes everything more epic as she dismisses her haters.

That momentum carries over onto “Inner Voices,” a conceptual track that has Awkwafina rapping with a split personality disorder. While on the verses she plays up her rap persona with hollow brags about “having ice on her wrists,” she questions herself and goes on silly pop culture tangents on the trippy choruses. Equipped with a groovy bass line and slick transitions, the song is easily the EP’s stand out. She also plays up the dichotomy of being braggadocious while lacking legitimacy on “Pockiez.” At one point she raps “I know I act rich but I am broke” and then moments later is hissing, “you can catch me in a Lyft with a pretty bitch.” Like much of the production on the EP, the beat is poppy and danceable.

The last portion of the EP leans too heavily into pop, unraveling as it exposes Awkwafina’s shortcomings as a singer. “Ghost” is a goofy track about her indifference to men. Though she has a hilariously feisty line about a “Fairfax Hypebeast Ye lover,” the hook is clunky. On the corny closer “Testify,” she melodically raps about her ambition. While the anthemic track marks most serious out of the batch but also the weakest.

Unlike the rapper who once did a cover of Mickey Avalon’s “My Dick,” Awkwafina is now demanding to be taken seriously while keeping her satirical edge. In Fina We Trust is neither perfect nor radio friendly but it definitely shows the budding starlet creating clever and interesting content.