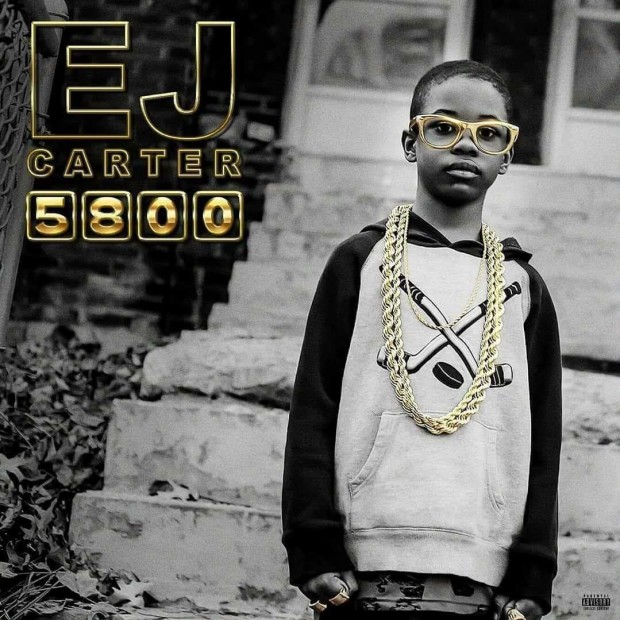 St Louis rapper EJ Carter has been on the cusp for a while now. Notorious, his 2015 debut, racked up millions of spins via Spotify and spawned multiple viral videos, yet failed to materialize into broader commercial success. His latest LP, 5800, has all the elements of a focused game changer for the 26-year-old, packed with solid musicianship that accentuates his songwriting and production.

More so than Notorious (his debut), 5800 is an intimate portrait of him as an artist, shedding light on makes him tick — right down to the title. 5800 refers to the address of his grandmother’s house, where he and his family grew up; before her death last year, she made EJ promise to tell his family’s story through his music. He gets right to it off the top with the title track, where he describes the trials and tribulations of a ghetto kid (living in that very house) with aspirations of industry grandeur, and the path that brought him where he stands today.

“Propane” — which recently won a HipHopDX #LitnessTest — is a clear standout on the record. Currently receiving a ton of regional airplay, the song works to establish EJ as a step above the other artists who inhabit the trap wave. It’s also oddly avant-garde, promoting marijuana as a turn up go-to while discouraging lean and pills. Adding more meaningful context, the song’s visual was filmed at his grandmother’s house.

Where “Propane” is the breakout-hit, “Planets” stands as the album best song. Written from the perspective of someone who just exited a long-term relationship (literally that day), it’s a profession of reckless love, at first sight, laced with a slow-tempo instrumental dripping in a southern funk.

EJ has a sing-song flow that lends itself to some of the earworms alluded to earlier. “True,” “Can I Juug” and “On God, which all appeared on his (mixtape) debut are excellent examples, with super catchy choruses and streetwise verses blanketed in an unspoken “it” factor. At times its reminiscent of a Nelly-esque aura.

The project is very cohesive, mainly because it’s self-produced, except three songs — and even those songs are well curated. “Blazed,” scored by LJ The Beatsheik, is probably the one song that is a sonic pariah, with nuances that give off a breezy West Coast vibe.

Overall, the music paints a relatable picture of a kid from the bottom who’s one hit away from a new plateau and two missteps away from reverting to a lifestyle that his environment desperately attempts to cultivate. There’s an exciting energy in his music, and — if all goes his way — 5800 could be the cheat code EJ Carter been trying to crack for the past three years.