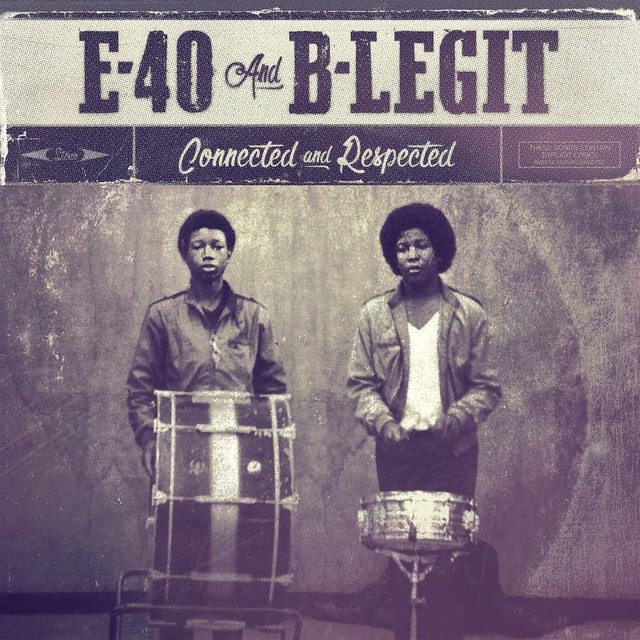 Which makes their joint Connected & Respected project a welcome surprise blending tag-team hood sermons, trunk-rattling production and features leaning more toward local talent. However, the project is anchored by 40-Water’s signature other-dimensional approach to rhyme and Legit’s more direct techniques. Similar to most duet rap ventures, Connected & Respected limits its ambitions to the main unifier, in this case harnessing the Bay Area sound.

For the most part, though, it succeeds by splitting time between sideshow adequate joints and putting the youth on game.

For those soil loyalists looking to get hyphy, the P-Lo assisted single “Boy” or deep album cuts including “Carpal Tunnel” and “Straight Like That” featuring Ocky are words to live by. But it’s the bouncy “Whooped” (featuring Decadez) that serves as the pinnacle of the album’s turn-up moments. “I’m cut from a different fabric, not no vinyl or no plastic/I ain’t at the airport but I’m getting to the baggage…” spits 40 with his now classic flair before B-Legit joins with “Forever locked in with the Africans/On the frontline with a black stick/Military issue get to clappin’ them.”

Connected & Respected‘s most redeeming qualities come when the music takes time to drop serious jewels between local party anthems. As Hip Hop’s continues the never-ending argument over generational disrespect, 40 provides a much nuanced context to that conversation on “Guilty By Association” with “Some of them come from broken homes/Some from foster care and group homes/Grew up without a father, it’s sad/Ain’t no uncles—see, an uncle is like a second dad…” as does B-Legit on the mid-tempo mover, “Up Against Us.” Things really become a family affair on “Blame It,” where The Click reunites, proving their ties still run thick after all these years.

Of course, for every scrappy certified banger like the ender “So High” (featuring Prohoezak), the 19-track project suffers from bloat. Then again, anyone who has followed these two O.G.’s careers long enough already knows lengthy albums has long been the m.o. That still doesn’t mean the under-utilized East Coast flavor from Uncle Murda on “Tap In,” “Fsho” featuring JT The 4th or the 4rAX-guested “You Ah Lie” were additions that strengthened the Yay Area festivities.

Nonetheless, fans who have followed E-40 and B-Legit will undoubtedly be surprised there’s plenty of gas left in the tank and find much to like with Connected & Respected.