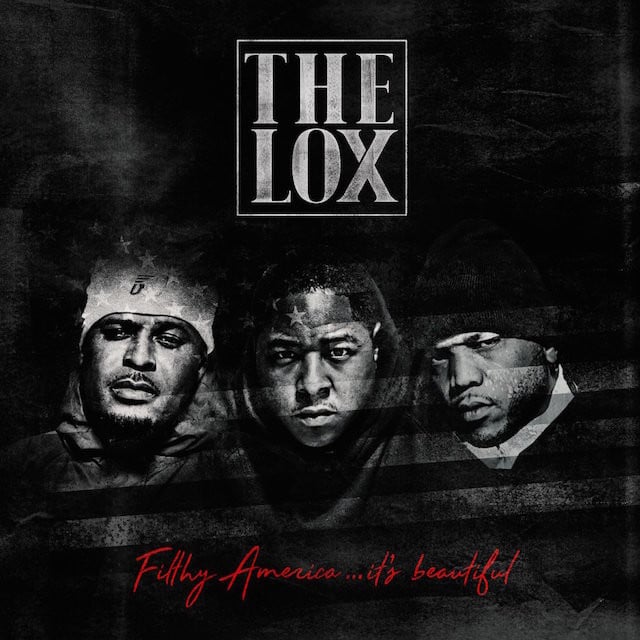 A lot has transpired in New York in 2016. The emergence of new artists like Young M.A, Ace Boogie, Dave East, and Don Q, has the city of Gotham beaming with promise. Several veterans like Jay Z, Nas, Fabolous, Fat Joe and Remy Ma, have provided poignant verses to keep the mecca of Hip Hop afloat in rap circles, as well. After drowning in a sea of mediocrity, New York is finally paddling its way out of oblivion. With the year winding down, Jadakiss, Styles P, and Sheek Louch are hoping to etch a lane with their first collective release in 16 years. Earlier this month, The LOX announced their deal with Roc Nation and revealed Filthy America…It’s Beautiful, would serve as their long-awaited junior effort.

Off the rip, The Yonkers triumvirate bulldoze their way through the dark and ominous track “Omen.” The spine-chilling record produced by Buda & Grandz. finds the trio spewing sinister bars stemming from their love for committing robberies to being raised by Satan. “What you know is first is evil is evil I need to/I’m dirty like a dopehead needle/But one eighty negatives repetitive/Crack your chest and your cranium nigga wicked like Damien,” raps Styles P. Jada follows his brother with wicked lines of his own, boasting about his allegiance to the Devil. “I’m a king from the underground/A lot of bad things happen when I come around/Yeah six is my number now/Scary part of it is I ain’t gotta gun em down,” brags Jada.

The LOX undoubtedly provide that quintessential, dogged, in-your-face rap that Hip Hop aficionados direly seek for in this new world occupied by mumble rappers. On “Don’t You Cry,” they eviscerate the Pav Bundy track with sheer aggression. To up the ante, they also mock today’s rookies by gushing about their pristine résumé in Hip Hop. “I don’t care what your new shit did, I’m a god/You been on my dick since you was a kid /And I ain’t never fall off, I got greater/Took it as constructive criticism instead of calling you hater/After that I made more hits, made more knocks/While you was talking bout the LOX, I had the Range on your block,” brags Sheek. The boys of Yonkers provide their best work on DJ Premier’s “Move Forward.” Bristled with swagger, the storied veterans chef up some of their best work over this unblemished Premo beat. Lest one forgot, in the 90s, New York was imbued with lyricism and bravado. So when The LOX reel in Mobb Deep for “Hard Life,” watching these two legendary groups, who were instrumental in popularizing wordplay warfare, is a sight to see over this Dame Grease-produced track. Both crews prove why their street-cred continues to remain A-1 in not only New York, but in Hip Hop, overall.

Sadly, not everything is sunny on Filthy America. The LOX’s valiant attempt of mixing in artists like Fetty Wap and Gucci Mane for commercial appeal looks good on paper, but ultimately, proves to be ineffective. After owning 2015 because of his infectious hooks, the “Trap Queen” rapper provides a lackluster chorus, while Jada, Styles, and Sheek sound unmotivated in this failed attempt to reel in young listeners. On “Secure the Bag,” DJ Khaled and Gucci Mane try to create a gateway for possible radio spins with their presence, but the pseudo-trap record lacks the steam necessary to bubble in the clubs because of its simplistic hook and weak production.

On Filthy America, The LOX prove that time can be both a gift and a curse. After 20-plus years, they’re still one of Hip Hop’s biggest bullies. They have no problem jumping off turnbuckles and bringing out the steel chairs in hopes of pleasing their rabid fans. It’s admirable. It’s why we love them. The problem lies in their predictability. Rudimentary hooks on tracks like “What Else You Need to Know” and “Family” are bereft of color and punch. Following a 16-year hiatus, insipidness pervades an album that should have been greater than what it is. They cemented themselves as prime-time rappers in the 90s and 2000s, but in the present day, The LOX seem comfortable living off past experiences, because it’s what ensured their legacy.