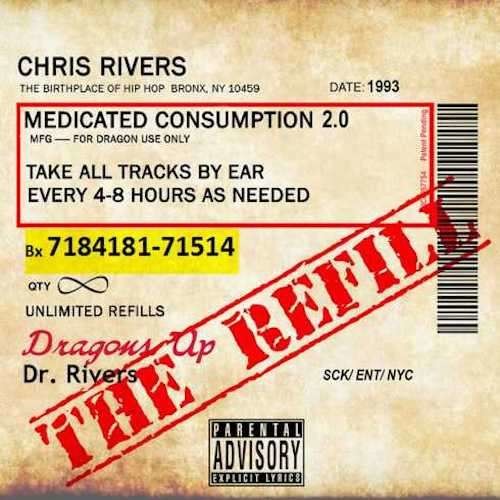 There is no bigger challenge than trying to carve your own rap career when your father is a legendary rapper. Most of time a rapper’s child, legendary or otherwise, will try to pick up a mic but then quickly realize that the casted shadow is just too insurmountable and ultimately decide to star in movies. Example: O’Shea Jackson Jr. in Straight Outta Compton or if you’re Lil Romeo then it’s Madea’s Witness Protection. For Chris Rivers, however, being “the son of Big Pun” doesn’t hinder his drive for individual success. Rivers dropped his original “Baby Pun” moniker in attempts to cultivate his own legacy instead of piggybacking off his late father’s – which was required if he wants projects like Medicated Consumption 2.0: The Refill to stand on their own.

The initial Medicated Consumption mixtape was released nearly one year ago and features six of the same songs as its new second installment. Although a tad redundant and seemingly unoriginal, hearing the half dozen one-year-old songs sprinkled throughout is a nice reminder that Rivers has been good at this rap thing for a while. Putting “Born For This” yet again at the top of the album hammers home how bad Rivers wants to live out his full potential.

“I Need My Jordans” is the first new cut to sequence through the tracklist and as much as Rivers tries to make it one of those silly piano sing-along mood lighteners he still raps with such a serious demeanor. Even though he is rapping about not having fresh shoelaces (even trite for a first-worlder) he possesses the most intensely concerned tone known to man. It actually makes the track hard to listen to because half of you wants to rap along to such carefree lyrics but not when they are delivered with such aggravation.

With the exception of the drill rock-riffed “Overload,” there’s no way Rivers can deny the family sound on the new material. He renounces nepotism but at every turn, he proceeds to spew out gutter Bronx-styled multi’s just like the late Punisher. It’s almost like you’d expect Rivers to sneak in a “dead-in-the-middle-of-Little-Italy” line somewhere. Don’t get it twisted, though, Rivers should feel proud that he can rap at such a level. There is however, a happy medium on “Chose Me” in which London On Da Track graces Rivers with a more contemporary beat with more melody than pocket. He details his engagement into the rap game with honesty and finesse.

Had it not been for the strength of “Chose Me,” this project would have been a lukewarm duplication of its first installment but the growth is visible and hopefully continuing. There is no easy formula on how to break through to rap’s next level especially when there is a “big” shadow cast over you, but Chris Rivers seems to be trending in the right direction.