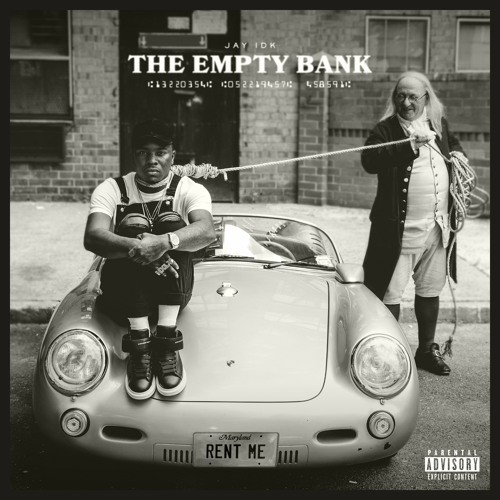 For Maryland MC Jay IDK, life has been on an upward incline since his 2015 album SubTRAP. The success of his last album has put him on a trajectory to gain traction outside of PG County and the DMV. Jay opens up on what his newfound progress comes with and how to balance the expectations of getting money with his latest album The Empty Bank.

The cover art, depicting Ben Franklin with a noose around his neck as he sits on a rented luxury car, serves as the perfect metaphor for the album. Jay gets right into the heart of the album’s subject material with the Kain Carter and Masego-assisted “Mr. Mills” to kick off The Empty Bank. The song starts with an instructional chant of, “Sex, Drugs, Money” as Jay IDK raps, “I guess I figured it out; money ain’t shit. I guess I figured it out; money is dick/a bitch will tell you your shit is good if your money long even if your dick is shorter than Gary Coleman”. As Mr. Mills continues to wax poetic with lines such as, “I’m spending everything I got on everything I don’t need” and “My friends see they say ‘sheesh he got lots of cheese’ it’s probably from the smiles they see on my IG but them smiles ain’t really me” he’s interrupted by a bill collector attempting to collect on his $30,000 studio bill.

Jay continues the trope of the indie artist on “Boy’s Innocence.” With Fat Trel by his side, IDK cuts through the downtrodden keys and eerie, ambient soundscape as he explains how money is the root of all evil with lines like “The money takes the boy’s innocence, the money tell the boy load the clip/the money tell ‘em rob ‘em for his shits, the money tell him bang then dip”. Jay is able to use his aggressive delivery to convey the angst of a man who will do whatever to get what he doesn’t have.

On “Priorities, Pt. 1” featuring Ash Riser and “Priorities, Pt. 2”, Jay takes a creative approach to one song, reminiscent to Lil Wayne on Tha Carter with “Walk In” and “Walk Out.” With each track coming in under two minutes, both share the same production and serve as two interludes. Jay’s ability to commit to his storytelling is a breath of fresh air as he’s able to seamlessly tie the story together between the tracks despite there being seven minutes of different tracks between them. Ash sets the tone over the simplistic yet paradisiacal drum pocket and melancholy chords with, “Through the eyes of the beholder, this road ain’t for the weak of heart” as Jay chronicles the long list of priorities he and his producer had to put to the forefront over music.

Jay IDK manages to put together a solid, high-quality effort. Sure to draw the sonic and tonal comparisons to Kendrick Lamar à la Section.80, Jay is able to put his own stamp in the lane on his third go-round. While Jay may not necessarily offer anything new to the road he’s traveling on to place the album into the 4+ Star rating territory, The Empty Bank is a consolidated project that’s worthy of your attention span on the stream.