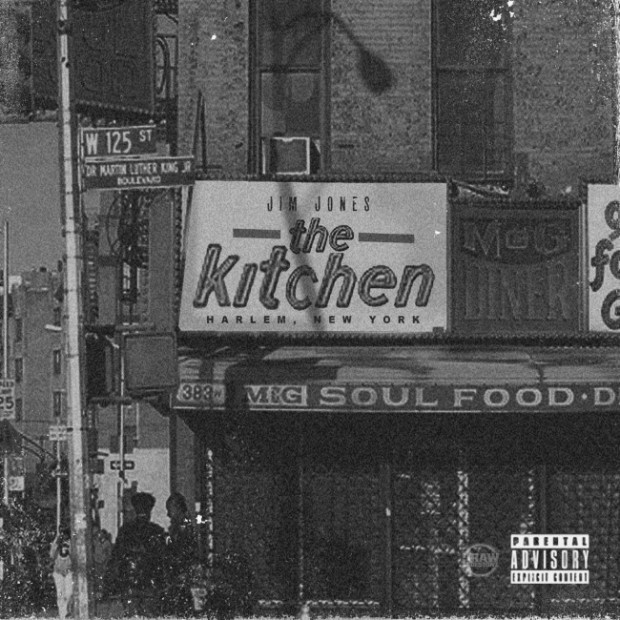 Maybe it’s the near-constant drug game reportage delivered in that unmistakable terse flow or the 808-propelled John Carpenter-esque backdrops, but there’s a curiously dated feel to much of The Kitchen, Jim Jones’ seventh studio LP (and first since 2011). A sizable chunk of the music gathered here continually harks back to Dipset’s famous early-to-mid 2000s run spearheaded by Cam’ron & Co. without restraint.

In one sense that’s not necessarily a bad thing: “Married to the Game” and “Cocaine” pack an impressive opening one-two punch, with the brooding production providing a suitably roughcast setting for Jim Jones to reintroduce himself and set the album’s hard-edged tone. He sounds particularly focused on the forthright “Addicted to the Game,” gazing into his rear-view mirror and dropping cautionary tales of powder ‘n’ stoves: “I sold crack to pregnant women so I’m ashamed/I seen dope fiends tap their arms tryin’ to find a vein/Me? I’m poppin’ rolls tryin’ to drown the pain/But the story’s so compelling/How the rap game saved us from the raw that we were selling/Some chose to abide by the law and start telling/But my niggas studied the law – they smart felons….”

Sure, there’s not much there that we haven’t heard a thousand times before over the past decade-plus. But such cold, matter-of-fact reflections are bolstered by the melancholy that hangs grimly in the air from the suitably downbeat instrumental, offering added depth and – excuse the pun – weight to proceedings. Similarly, “They All Say” pulsates with ‘80s cop show-inspired synths shot through with a wistful sax, comprising a spirited soundtrack for the lyrical bombast that’s redolent of those halcyon Dipset days. The problem, however, is that these high points are frequently offset with some serious slumps throughout the set, as Jones’ efforts to bring things up to the present day frequently falter.

Dave East, fellow Harlem resident and Nas-endorsed lyricist, delivers a focused guest shot on “Eastside.” But while his vocal chemistry with Jim gets pass marks, the track is hamstrung by some fairly pallid production. Elsewhere, “Whole Lot Better” – the most explicitly modern cut here – is an unfocused wobble, as Jones’ personal and introspective take on the drug game badly jars with the state-of-the-art Metro Boomin-inspired beats and terrible hook.
Much better is “Harlem,” which finds Capo and guest A$AP Ferg in full-on shit-talking braggadocio mode, taunting and tormenting their detractors over a stark, almost industrial rhythm. At just two-and-a-half minutes long, the track doesn’t outstay its welcome, serving essentially as an intermission to break things up.

Despite the strong work on offer here, The Kitchen is laden with forgettable filler. The album’s broader failure to break any new ground either thematically or sonically (you’d be forgiven for thinking a couple of the songs here were recorded back in 2006 and only just unveiled now) is a fairly damning indictment given the stylistic leaps and bounds the genre has made over the past decade. Jim Jones does serve up some sporadic brilliance here but many of the insipid dishes cooked up here should, ultimately, returned to the chef.