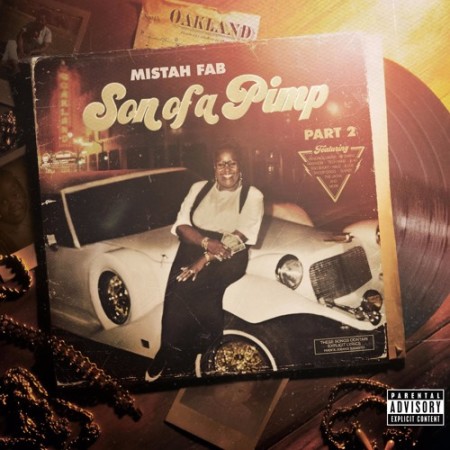 To be the best, you have to beat the best – and that seems to be a clear philosophy for Mistah F.A.B.’s latest, Son of a Pimp, Pt. 2. The album’s 2005 predecessor had a lot of cameos, but they were all exclusive to Bay Area features; appearances from legends like E-40 and Mac Dre on F.A.B.’s sophomore disc felt like references for approval on a résumé for the region’s new star. But on this year’s sequel, the robust roster of more than 20 guest MCs includes respected lyricists from all around the country – Kendrick Lamar, Lupe Fiasco, Jadakiss, Raekwon and Tech N9ne all stop by to lend their bars here. After years of dropping music and earning stripes as a battler, Mistah F.A.B. is either ready to be mentioned with the best, or to celebrate his legacy by calling industry elite to share company. Whatever the intention, Son of a Pimp, Pt. 2 proves that Mistah F.A.B.’s respect from his peers and predecessors is well-deserved.

It’s virtually impossible for Son of a Pimp, Pt. 2 to feel cohesive with so many voices spread over tracks, but it holds up as a collection of good songs. The production is consistently polished, and F.A.B. holds his own. What also stands out is what the album doesn’t do. Son of a Pimp, Pt. 2 doesn’t have the self-mythologizing one may expect from the sequel of a revered album, and F.A.B. doesn’t attempt to change his style to match his collaborators. (An invaluable virtue more artists who attract collaborations should follow; take notes struggle rappers!) He confidently sticks with his own style, making him stand out from his guests. And he maintains a laser focus on the songs’ respective topics and issues, painting the scene of his hood to show common ground. “Survive” sees F.A.B., Kendrick and Crooked I somberly reflecting on making it out of the violence and poverty in their respective Californian hometowns, and he gets fly with Raekwon and G-Eazy on the smooth “Pretty Girls.”

He also manages to sound natural over an array of sounds – trappy rumbles on the Tech N9ne and B.o.B.-assisted “Backseat,” a cinematic beat by Pete Rock on “What Yo Hood Like (featuring Jadakiss),” and the blaxploitation horns of the title track. The variety of cameos is equally rewarding. Lupe brings laid-back super-lyrical stylings to “Yes Indeed;” Keak da Sneak and E-40 revive the hyphy movement with the Bay-ready “On All Mommaz;” and “Commin’ Down” is a capable southern posse cut with verses from Bun B, Slim Thug, Paul Wall and Z-Ro.

Mistah F.A.B. has a bloated guest list, but the few solo raps on Son of a Pimp, Pt. 2 are some of the best. The title track features him remembering the pimps he revered as a child growing up in Oakland, while “Not in Love Anymore” sees him earnestly apologizing to a woman he mistreated. The album’s penultimate song, “Brother to Brother,” shows a pair of siblings writing heartbreaking letters to each other between prison and the outside. Songs like these show that while stable relationships are valuable, that Mistah F.A.B. has the solo chops to continue his career as one of the Bay Area’s heavyweights.