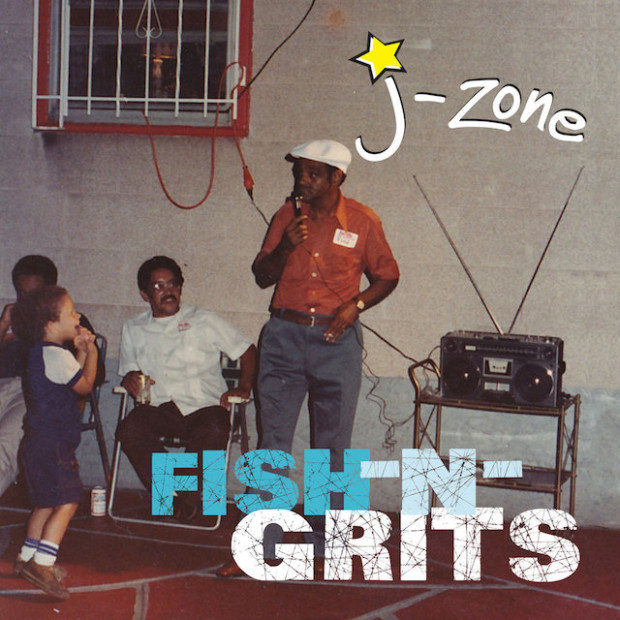 The digital age is a free for all where some acts fall through the cracks because marketing and timing trump the importance of talent, thus J-Zone’s back catalog consists of barely cherished artifacts. Not that his work is from an era that’s far behind us, but it’s remained largely undiscovered with popular tastemakers including Questlove just catching on in more recent history. Able to boast a cosign as big as CeeLo Green a decade ago, his 2011 memoir “Root for the Villain” recapped his failure to break through despite his skill set being a rap fanatic’s dream. A shtick that should have gained more traction, his 1999-2004 run consisted of five self-produced releases (tongue-in-cheek titles include Pimps Don’t Pay Taxes) where he took on the humorous role of a well-intentioned cynical degenerate. Returning from an extended hiatus with 2013’s Peter Pan Syndrome, coming back to music was his middle finger to society’s idea of what adulthood should mean.

Album numero diez, Fish-N-Grits, finds J-Zone pushing 40 still refusing to play nice or kowtow. An elder statesman with an encyclopedic knowledge of ‘80s rap (and much of the music that inspired it), his answer to Hip Hop’s ageist divide is simply to poke fun at how ridiculous everyone is. The album’s sensible intro “Shut Up, Make Music” presents listeners with two archetypes that are mentioned throughout the project; Swagboi carries little respect for tradition while Purist chastises him for it. Given J-Zone is a native New Yorker who routinely speaks out against transplants and their gentrified habits, longtime fans will recognize “Time For a Crime Wave” as a return to form. Jokingly in favor of anarchy, here he wishes for major record label upheaval while airing out the public’s hypocrisy as he says “Dissing Bobby Shmurda for being a coon/But L.A. Reid was sitting right in the room.”

Self-definition is one of the most key elements to building a Hip Hop persona, and J-Zone is a willing disgruntled yet amusing vigilante. Different from the average washed and embittered emcee determined to hate youth movements and trends, on Fish-N-Grits he takes aim at regularly irksome encounters. Pulling no punches, the self-explanatory “I’m Sick of Rap” lampoons the melodrama surrounding the ”keep it real” cliché. Not only sneering in the direction of the pretentious crowd Nas infamously deemed “trapped in the ‘90s niggas”, politics and bullshit have completely worn thin as he shuns the annual SXSW experience, networking with peers and the idea of being discovered via blogs. Sticking to this jaded theme, on “Dreamcrusher” he and long-running right hand man Al-Shid vent about the slim to none success of aspiring towards stardom, while “Go Back to Sellin’ Weed” is a message to anyone treating the rap game as a quick hustle to cash out on.

While it could seem he’s stagnant with complaints about his field, J-Zone demonstrates self-agency taking steps towards musical progression by adding live drumming to his bag of tricks. A relatively newer part of his routine, well-executed breakbeat inspired interludes like “Stick Up”, “Seoul Power” and “Funky” show potential for him one day be recognized as a full-fledged musician outside of the stifling underground Hip Hop box. Sticking to his guns no matter the cost, Fish-N-Grits is stocked full of the quirky beats and jovial anger his niche crowd has signed up for. Once considered too far ahead of his time and grief-stricken at the inability to reach a wide audience, J-Zone still excels at painting himself into a corner; but he wouldn’t have it any other way for now.