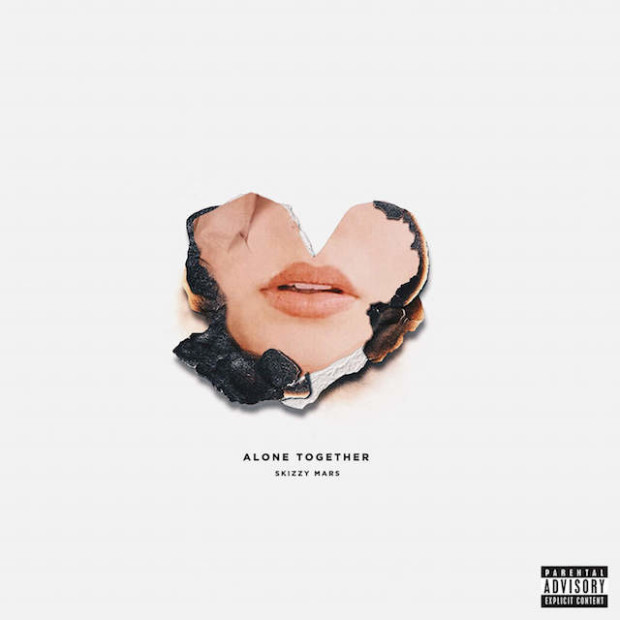 Skizzy Mars doesn’t sound like a New York rapper. His swagger is from ATL, his vibes from Hollywood. He has a knack for melodies and an ear for a very specific, therapeutic, aesthetic. Mars seems to gleefully shed any geographical stereotypes projected onto him, and focuses simply on one thing: being heard. For the most part, Skizzy Mars is of the moment—in the most blissfully carefree way possible. But under the free-flowing aura, the collected demeanor, is the template of a world-weary kid striving for tangible relationships in this digital age.

Alone Together, his studio debut, has been radio-ready since conception. Michael Keenan, the backbone of this release, sets the scene early on with airy, atmospheric production that rarely lets go of its uptempo pop roots. The bubblegum backdrop allows Skizzy’s youthful exuberance and contrastingly heavy air of nostalgia to comfortably coexist as he raps and sings his way through the tight 44-minute runtime. The duo present a fusion of pop-rap that mirrors the earlier work of an outfit like N*E*R*D, rather than any New York MC from the same era. Together they show a clear disinterest in rap as it’s been defined by the old-guard–what good is dusty boom-bap if you’re “poppin’ pills goin’ insane” on a beach in LA? What good is traditional rap if the girl you’re chasing is obsessed with Morrissey’s “You Have Killed Me?” When Skizzy Mars does rap, it’s inoffensive and briefly paints the picture before the inevitable chorus steals the show. Because even when a verse may lack conviction, Mars almost never misses the mark with his hooks.

“Alcoholics,” the eventual lead single, was as good a choice as any. Similar in many ways to Kendrick Lamar’s “Swimming Pools”, “Alcoholics” ponders the plight of the same vices it wallows in. However, unlike the good kid’s liquor baptism, Mars takes a less ominous approach. For most of the record, the 22-year-old MC prefers to be less foreboding and more c’est la vie. From the opening track’s suggestion to “dive in” to the closer’s declaration of Mars being the “Black Hank Moody,” (a Californication reference for the uninitiated) the album feigns melancholy at times, but is ultimately about that “silver lining.” However, with “New York City in the rear view,” Mars isn’t entirely immune to the disillusionment Tinseltown ambitions may bring. Tracks such as “Give Up on Me” strive to balance out the album’s narrative, but are ultimately overpowered by Mars’s own forward motion.

In this sense, Alone Together is notably consistent. Aside from a few sour notes in the writing (such as the unfortunate “I don’t fuck with sluts, I just fuck with you” aside on “Comb”), this project is a sign of maturation on all front. Keenan unflinchingly embraces an almost saccharine sound for the entire runtime and turns the record into a fanciful playground for fluttering strings and soaring, anthemic vibes. The songwriting is tighter than ever (see: “Girl on a Train”), and fully utilized features, such as JoJo’s contributions to the latest, and strongest, single “Recognize,” always keep the momentum going. “It’s true, I was never your girl baby, but don’t remind me” singer PJ, poignantly conveys on the closer, “Silver Lining.” A moment of blissful ignorance for all parties involved, this sentiment neatly sums up Skizzy’s state of mind. He’s in limbo between his trying upbringing and his bright future, but as long as he continues to focus on his craft, there are for sure silver linings to be found. The New York rap scene isn’t dead, it’s just thriving where you’re too afraid to look.